One of the great questions in life. Scratch that. The GREATEST question in life, is whether or not we are alone. Billions of pounds and millions of man hours have been devoted to answering that question. But no matter how many pieces of evidence are provided, our tiny little brains cannot fathom the possibility that we are not alone. Frankly, it feels like even if a goggle eyed grey alien himself were stood blinking in front of us, we’re so damn numbed to the possibility, we’d still deny their existence.

And suuuuure, some of us are open minded. But lets be honest we are the small minority.

I talked recently about the Fermi Paradox, that questions why, if the universe is infinite and there’s infinite possibilities of life, haven’t we come into contact yet? One of the questions still left in my mind, was what if, in trying to contact ET’s we have been both sending out messages they can’t understand and interpreting messages left here completely wrong the whole time.

How would we communicate? and what is the Universal Language? Many claim its numbers and maths. But aren’t those constructions of society and humans? Numbers are a method of measuring but what if our lifetimes span completely different timescales to others, perhaps our numbers would be trivial. Damon T. Berry, writer and filmmaker has come up with a suggested answer that I find intriguing.  END_OF_DOCUMENT_TOKEN_TO_BE_REPLACED 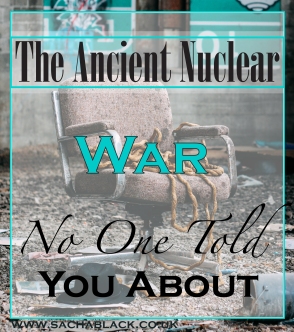 We think we’re real smart as a race. We keep creating bigger and better weapons, anything so long as we got the biggest, best toy in the playground and you don’t. But what if we weren’t the only smart cookies on the planet. What if thousands of years ago, we the arse scratching cave men of the period, or in fact, another race entirely had already made big-bad-apocalyptic-world-destroying weapons?

What if we’re late to the game cause someone else already thought of nuclear weapons 10,000 years ago?!

Well that’s todays wonder – the theory that nuclear weapons are not a 20th century invention at all, but a bronze age creation. END_OF_DOCUMENT_TOKEN_TO_BE_REPLACED

When it comes to fame the Egyptian pyramids make Kim Kardashian’s gazillion twitter followers look small fry. There are very few people I know who aren’t aware of the pyramids.

BUT, the Egyptian pyramids aren’t the only mysterious pyramids in the world. Far from it. In Visoko, Bosnia, there reigns another king, and this one really is the biggest pyramid of them all.

END_OF_DOCUMENT_TOKEN_TO_BE_REPLACED

Pop quiz: what metals are the most conductive?

Answer: Silver, Copper and Gold. In that order.

Our planet is mineral rich. It’s like a candy store of minerals. When you look at the density across the solar system compared to our planet, we’re disproportionately saturated.

So what, I hear you say…

Pop quiz: True or False? We have electricity in our bodies.

Answer: True. The only reason we’re living breathing story addicts is because our brains conduct electricity through neurones and across synapses, sending ‘messages’ to our muscles and cells.

I love a bit of logic, so let me rub my wannabe Aristotle hands together and ask you a question… If our brains conduct electricity and the most conductive metals are silver, copper and gold, does it not follow that having those metals in our bodies would make us conduct electricity better? Make us function better… Does that mean we need those minerals in our bodies? END_OF_DOCUMENT_TOKEN_TO_BE_REPLACED

I often find myself wondering about my eyesight and the quality of my perception. I mean, how much of what I see is actually ‘real’ versus an illusion. Technically we have blind spots in our vision where our optic nerve joins the back of our eye, yet our brains interpret and fill that space so we don’t actually have a blind spot in our vision. We monkeys are easily tricked by even the simplest of illusions.

Yet there is one visual mystery  I just can’t believe is a trick. The ancient flyer.

The Ancient Flyer is a sculpture and carving that has been found all over the world. Said to be  thousands of years old and yet, upon looking at it, appears to be an aircraft. No, really!

This post has been on my list for some time, but it wasn’t until my son poked my necklace  and said ‘plane,’ that I remembered. That reaction, the ‘point and plane’ is exactly why I  wanted to write this post in the first place. END_OF_DOCUMENT_TOKEN_TO_BE_REPLACED

I was always more of a star trek than a star wars fan. Specifically, Next Generation, with ol’ Captain Jean-Luc Picard. He was ‘da man’ according to my dad. To which, of course, I immediately wanted to rebel against any such assertion, so I insisted on calling him Captain Plackard for the better part of half a decade.

In both those franchises, there are more creatures and ugly aliens than puss filled spots at a 15th birthday bash.

But what of ‘real’ aliens? And what if you wanted to add a pinch of reality to your science fiction?  END_OF_DOCUMENT_TOKEN_TO_BE_REPLACED

Connect With Me on Social Media

Looking for something? Search my site here