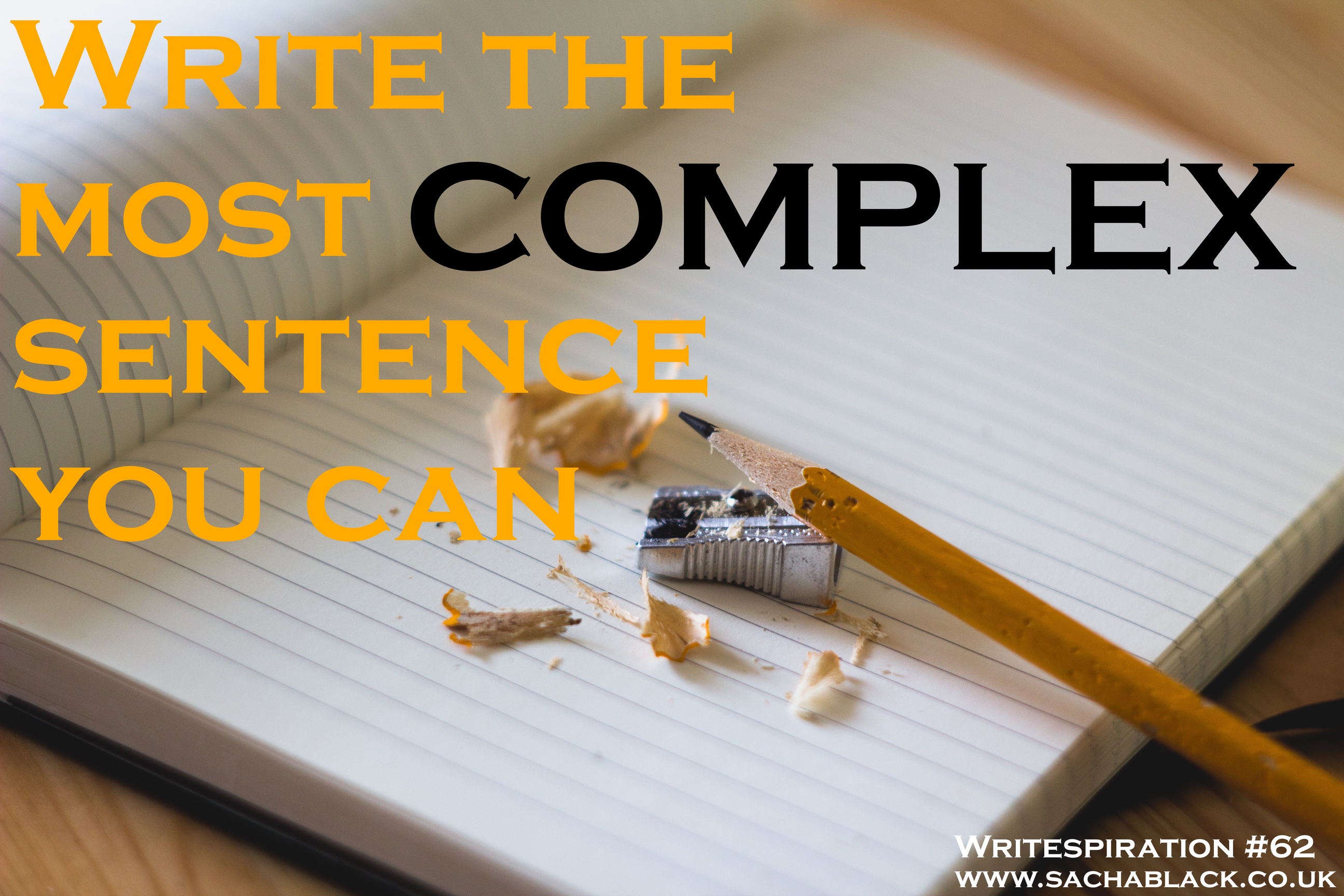 It’s been a while since we had a fun challenge. So lets see how this goes. This week, you only need write ONE sentence. BUT… it has to be the most complex sentence you can possibly make. Maybe that means fancy pants grammar, or enormous words, however you do it. It’s got to be THE most complicated sentence you can possibly make. Oh and it needs to actually make sense!

Ok, I’m cheating! I didn’t come up with this sentence myself, but its still pretty cool.

Geoffle properly out did himself this week. I tell you, if your emotional, maybe don’t read this one, it will rip your heart out and stamp all over it! (In a good way… I think, despite the tragic story!)

Marje McCrae made tea. Gordon McCrae held open the living room door allowing Marje to carry the tray to the footstool and put it down. Marje fiddled with the best cups – she liked the handles to point away from the drinker so they had to turn the cup round. That little twist and the subsequent small rippling ‘brought out the flavour’ she said.
Gordon opened the green baize-covered card table that had belonged to Great Grandma O’Connor and placed the square brown clock (Auntie Phyllis had given it to them for a wedding present) in the centre. ‘Me and the clock’ Gordon joked, ‘Always on time.’ For the first time since he had wound it up in October 1979 he opened the back and turned the hour hand ahead by six hours.
The clock now showed ten minutes to seven. Outside in Gallashields, no one stirred at such a late hour. Gordon took his seat. He couldn’t look at the clock but he counted each tick in his head while staring at the black house phone that sat on the side table.
At one minute to seven, Marje leant forward. Gordon put a hand on her cardigan sleeve. ‘Nay, another minute, love.’ He could feel Marje trembling under his fingers but he could neither do nor say anything that might stem the shakes.
At a few seconds after seven, the clock on the tower of St Mark’s Kirk struck one and Gordon removed his hand. Methodically Marje went through her routine for pouring the tea. Gordon pulled the little wash bag onto his lap and opened it. Careful not to drop any, he counted out the pills. He reached forward and placed one set on Marje’s saucer.
For the first time since the representative of the Foreign Office had confirmed there would be no reprieve Marje’s gaze met Gordon’s pale blue eyes. Somewhere, thousands of miles away, in dirt and squalor one life was about to end. She nodded. Two other innocent victims held each other’s hand and with a studied care that had framed their lives they joined their son.

Next up, the extraordinary Jane, who equally picks up your stomped on heart from Geoffle, and lights a match to burn the remains. If you’re not already, then you are about to be a broken, sobbing mess. Again, a stunning piece of seriously emotive writing.

“No,” I say. “No blindfold. I want his last sight to be the eyes of his victim’s mother. Let him take that to hell.”
I watch from behind the glass screen. Close. I see the terror in his eyes and I gloat.
That’s how she felt, you filthy piece of shit. That’s how my baby felt at the end.
He reads the thoughts in my eyes. He sees the hatred I feel and he knows that if this piece of glass wasn’t between us I’d rip his heart out with my bare hands. The executioner looks at me. I turn to the abject, quivering scum in the chair, and I grin. I let him know.
This is your last moment, bastard. Fry!
His eyes open wide. He pisses himself. The executioner pulls the switch.
I watch it all, never taking my eyes off him, never letting him remove his petrified gaze from mine. I watch every twitch and convulsion, savouring ever spasm, hoping it hurts. Hoping it goddam hurts so much!
I watch until the end, and he slumps to one side, his glazed eyes still fixed on mine. Only then, in the silence of expiation, do I see the woman on the other side of the room, sobbing. A man, her father maybe, holds her shoulders while she weeps. Only then do I see the image in the dead eyes—the woman and the two children—not me, not my baby, but his. In that instant I feel no sense of satisfaction, no savage joy in watching a just killing. Emptiness fills the space where love used to be, my future that was in watching her grow is dead, shrivelled.
I want to go to the weeping woman and share her tears, but the man hurries her away, back to her children—children with no father, me with no child. Is the balance restored? Will the blackbird ever sing for me again? One broken family goes back to try and put the pieces together. I go back to the hollow sky and the sound of a dead child’s laughter.