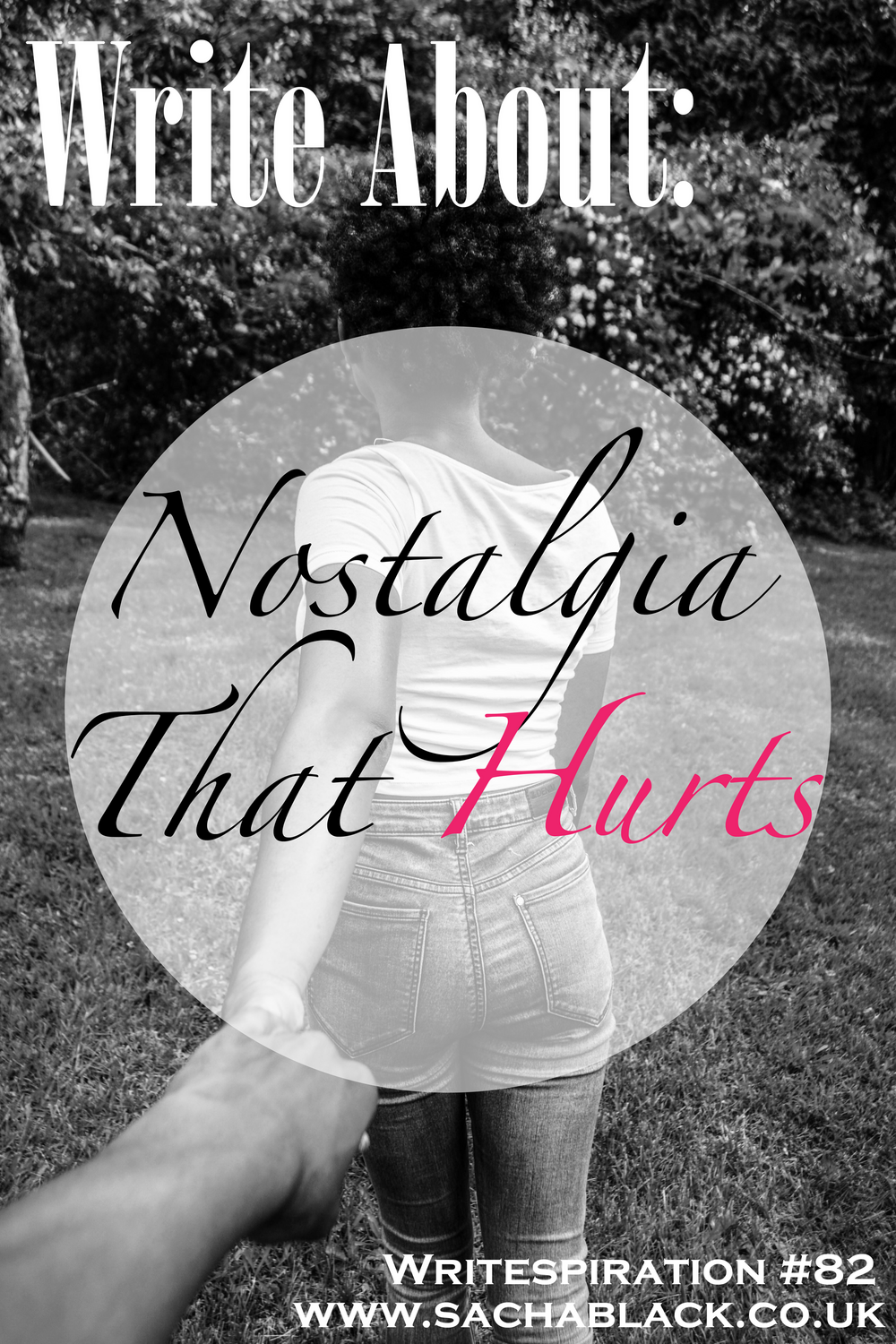 There’s always one. Even when you fall so bone achingly in love that you’d happily tear your ribs open and carve pieces of your heart into a shrine dedicated to your true love…there’s still that one.

They got away. Left. Broke you in a way no time or superglue can ever fix. They are the ones that changed you. Forever. And they’re never coming back. That’s why no matter how much time lapses, no matter how many wrinkles you gather, it will still hurt. It failed and tore everything you knew to pieces.

Maybe it wasn’t a lover, maybe it was a job you lost, or a friend that parted ways, perhaps a parent, or aunt or maybe your first home. Whatever it was, we all have that one thing.

But isn’t there a kind of sick satisfaction in thinking about it? Like picking a scab, it hurts a bit, but its satisfying when you take the head off.

So here’s this weeks challenge:

Write about a nostalgia that hurts in less than 200 words.

This is dedicated to my friend, who hurt, but is now I’m pleased to say, smashing life again.

If you liked these posts, why not subscribe here to get writing tips, tools and inspiration as well as information on the release of my books.

Now to last weeks entries and stories about judgement.

First in Geoff with a true story

First time I see her I’m standing at the till. She sails past on her bike – pink wheels, not that I notice then. It’s her blond hair. An absolute mass.
Next I’m loading the car with paint and the same blond mountain walks past me. A back view only but the micro skirt and elongated legs are unmissable. Heels too which seem unnecessary given her height.
After that she’s unmissable. Or is that ubiquitous? Getting off the train. By the bar in the Goose and Gumption, seen through the smoke-tinged glass.
I suppose I’ve noticed her at least half a dozen times – a dazzling, statospheric presence – before I see her face. Really see the chiselled features, beak of a nose, grizzled chin. Not even a parody of masculinity.
What surprises me most? The flamboyancy? The in-your-face-ness? The courage?
It takes me too long to make up my mind because I must be gawping. He. She. I’m not sure where on the gender spectrum to place the person approaching me. But the expression on that face is unmistakable. Contempt. At the biases and prejudices my face cannot, in that moment, hide.
‘Go fuck yourself.’

Jane in next with this awesome little story with a twist (even if she’s cheating on her WIP, naughty!)

The bus is late. Warily, I watch the lad in the hoodie leaning in a doorway at the other side of the road. He takes a drag of his cigarette then spits on the ground. A little old lady with a stick and a big dog has to push past him to get out of her front door. She struggles with stick, key and dog to lock up.

The lad in the hoodie tosses away his cigarette. His voice raps out sharp words. The old lady quavers something and yanks on the dog’s lead. The dog reacts slowly. It’s fat. She yanks again. The dog limps, dragging a lame leg. She shouts, shrill and imperious. The stick whips up and down, and the dog screams.

The lad leaps after her and grabs the stick. The old lady shrieks abuse and people start to drift over. The lad throws the stick into the road and storms over to my bus stop.

He is young, fragile, eyes full of hurt. He stuffs his trembling hands into his pockets and watches as the old woman, still vociferating, moves off down the street. The dog turns, his eyes, like the boy’s full of misery.

Next, Hugh with this lovely little twist – jump over to his post to see the photo that inspired his story.

Juliet had watched all day as each woman went through the door that only unlocked itself on Leap Day.

Some came back smiling while others would come back through the door crying.

Now it was her turn and waiting on the other side was Glenn.

“Yes” was the word she heard when she proposed, but Juliet never came back through the door.

People waited for her and four years later there was still no sign of her.

The two women married each other. Juliet had stayed so she could rest in peace with her beloved Glenn.

Next Judy, with this CRACKING and hilarious poem with a proper lesson in it.

As he chats to the blonde at the bar

She really is a stunner

The best looking girl by far

Her boobs are pert and rounded

Her teeth so pearly white

With hair so long and lustrous

And a bum so firm and tight.

They leave the bar together

And end up at her place

He knows what’s about to happen

And his heart begins to race

He starts to kiss her deeply

And his hands begin to roam

It was not what he expected

When he encounters silicone!

He moves on swiftly upwards

And runs his hands all through her hair

But it feels all hard and bumpy

With the extensions that are there!

His ardour is now waning

As he gropes her peachy bum

That hide a wobbly tum!

This is not what he signed up for

There must be some mistake

Was really just all fake!

Lori Carlson in next, you can find her here and she’s written a fab story with a scary kick to it.

An Unexpected Night by Lori Carlson

Marlow wasn’t used to walking home alone. And definitely not at night. Her secretary usually accompanied her, but she had an unexpected dinner date that night. Marlow envied her secretary. She remembered when her calendar was filled with dates, but these days, she was lucky to even get a drink with a handsome stranger.

She left the office and headed down 5th Street. The City was still bustling with people even though it was after seven. She turned the corner and headed up Butte Avenue. She only lived a few blocks away and hate to spend money on a taxi if she could help it. Her mind drifted to the day’s business accounts. They’d just acquired a new account and Marlow had spent half the day reviewing the records. This account, if handled correctly, could put her on the map.

She heard the footsteps. Leather on pavement. Clip clap. Clip clap. It wasn’t that unusual for someone to be headed in her direction. If she wasn’t alone, she’d probably never even paid attention. She kept walking.

The footsteps got louder. Closer. Clip clap. Clip clap. Marlow increased her steps. Her heart skipped a few beats. She laughed at herself for feeling frightened.

Faster and faster, the sound of footsteps even closer. Marlow turned the corner and quickened her steps. She thought about taking a short cut through the park and then decided against it. She would be completely isolated in there. What if whoever was following her entered the park too?

The steps behind her turned into a slow jog. She could hear the heavy pounding on the pavement. Apprehension turned into real fear. Dare she look back? The sound intensified. Whoever was behind her was now running. Marlow heart raced. Her mouth went dry. She could feel beads of sweat forming on her forehead. She sprinted across the street to head up her block to her apartment building.

The person behind her was running across the street too. She could almost feel his breath on her neck. Had she taken one too many chances in a City this big? Don’t let me die this way, she prayed. She kept running. Just a half of a block more and she would be home.

“Angie! Angie!” a voice behind her screamed.

Marlow looked ahead of her and saw a blond standing at the end of the block. She stopped, turned around and was nearly knocked down by a man running behind her.

“Oh sorry!” he apologized. “My fiancée is just there,” he pointed at the blond.

Marlow laughed nervously as she smiled at the man. He went on about his business, but Marlow couldn’t help but still feel anxious. It hadn’t been what she thought at all, but she wouldn’t feel safe until she was inside her locked apartment.