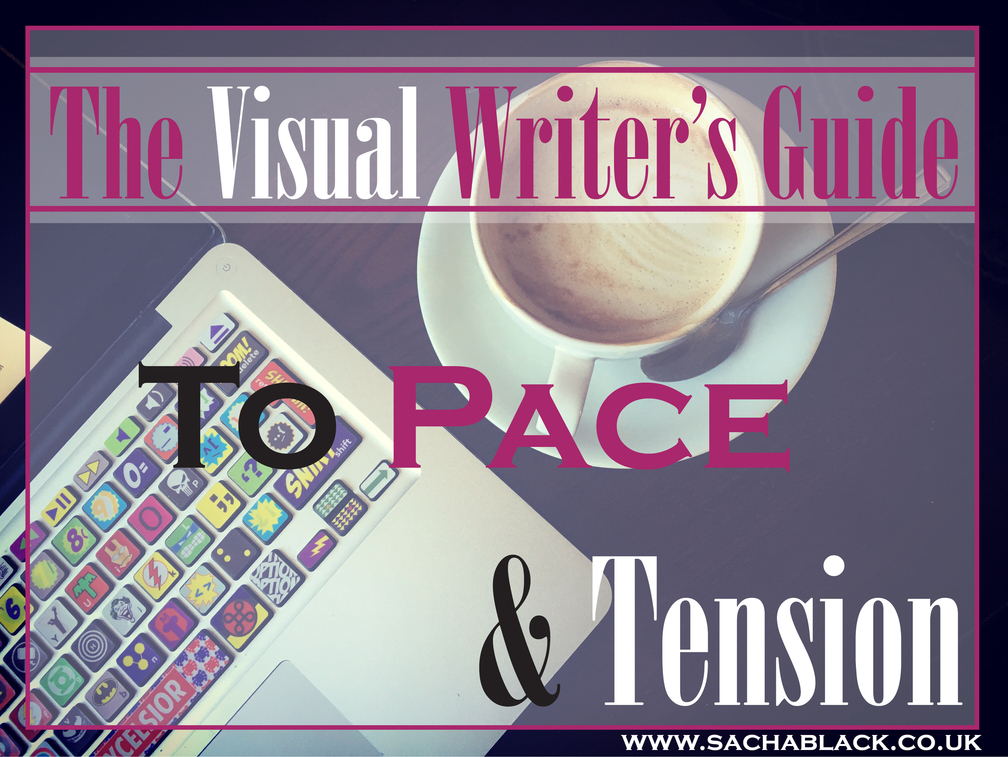 I always thought being visual and a writer was a massive contradiction. I don’t mean having an imagination. Obviously a writer needs an imagination. I mean, in the way we process information.

See, when I think, or try to work out a problem, like how to prevent the terror tot shoving his finger up his nose in public, I think in pictures and voices. Yes, I hear a voice in my head, but not the kind of voice that whispers violent temptations, although sometimes it might be nice to blame my rage on it… Where was I? Some people think in words or numbers or actions. If you have synesthesia you might even think in colours, senses or feelings.

This has never been a problem for me. It just meant I created mood boards for my story worlds and characters on my pinterest or instagram, rather than filling out character templates and scene plans.

That was until I wanted to check the pacing and tension of my novel.

Once you’re knee-deep wading through the slush of your story, you know as well as I do, you can’t see the commas for the sentences. Let alone step back enough to see the shape of your newly trimmed manuscript.

So I set about some research and have figured out my own method, using a Sacha sandwich of pilfered ideas, to help visual writers figure out their uppers from their downers.

But before I launch headlong into visual trickery, I need to caveat what I’ve done.

Story structure takes many forms. All stories build the tension until they reach their big crescendo ending.

Murder mysteries usually start with a bang, have a gradual build up followed by a spangly-jazz-pants reveal at the end. Fantasy stories, Young Adult in particular tend to have a few more ups and downs spread throughout their stories.

Like anything in fiction, there are as many story structure followers as dark horse structure breakers. But that’s what makes stories interesting.

However, for the purposes of allowing me to wear my scientists white jacket and entertaining my experiment for a while longer, lets accept that most stories need to follow a progressively increasing line of tension.

There are a couple of basic story structures that are easy to follow, Dan Wells gives a great lecture series on the Seven Point Plot Plan which you can see in this YouTube video. If you haven’t watched it, you should.

In the videos he explains the various key points in a story:

Pinch Point 2 (more conflict, shit gets real when we think the heroes going to lose/die/spontaneously combust)

Plot Point 2 (suddenly the hero has the thing/tool/power he needs to win, yay)

K.M Weiland follows a similar structure but has a couple of additional points she adds in. Because I am particularly visual, I happen to like her diagrams, links to them all can be found here. She adds:

Set up which is between 1 and 12% of your story

That’s all great y’all. But when you’re a visual/diagram slut like me, a bunch of words and percentages ain’t doing shit to help me sift through the opaque sludge my book’s pacing, structure and tension have given me.

So… In a moment of indecision I decided to chuck ‘coin flipping’ in the fuck it bucket and smush them both together in a Weiland-Wells LoveOff, curtsey of the diagram below.

You may want to click on it to enlarged it.

This is a baseline. What an average novel’s tension and pacing would look like. But I want to know how my novel compares. Is my tension right? Is the pacing correct? Is it too much, too little? Long rest periods? 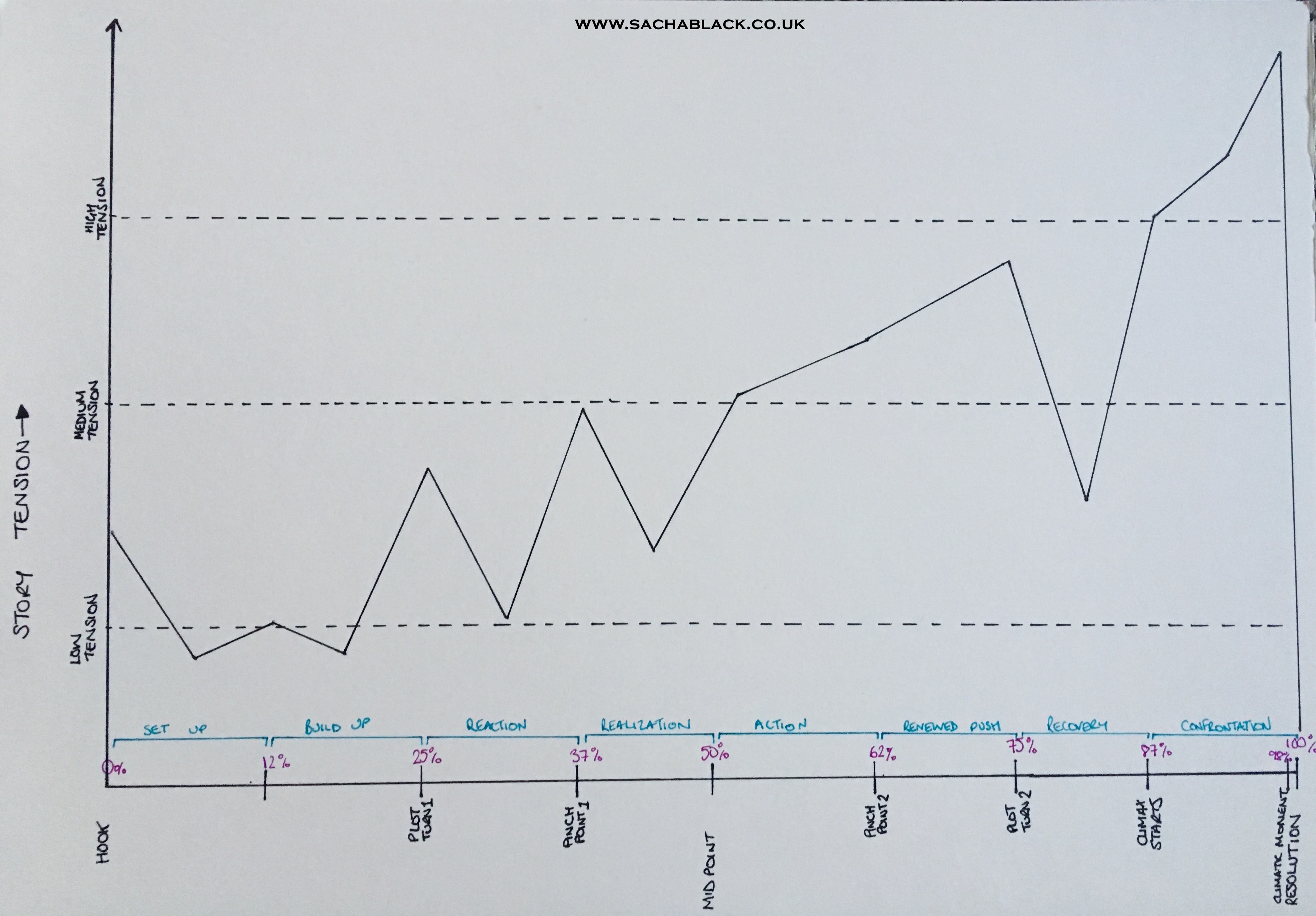 In order to unfrazzle my head I decided to overlay my book onto the chart. You could over lay by scenes or chapters or just by plotting the main events. But for me, I wanted to know where every chapter (in order) sat on this map.

I have 1-2 sentence summaries of each chapter which give me enough information to remember roughly what the chapter is about.

I made a judgement call, using the sentences (and a hazy caffeine fuelled memory) to plot each chapter on the chart. This is the result (note it’s only a section so it’s enlarged) 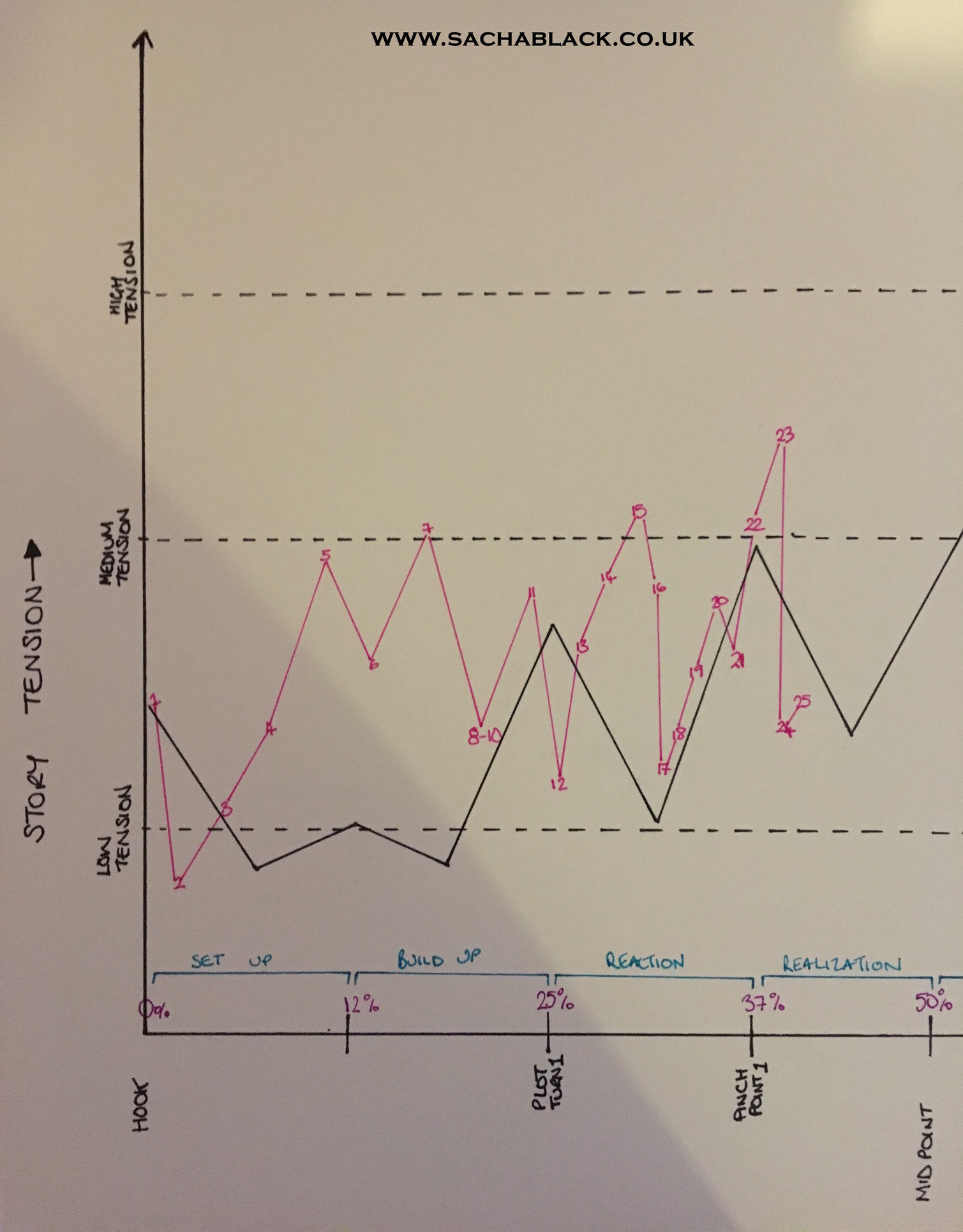 *claps hands, gives self a gold medal* I can use a ruler. So what. What does this actually tell you? and how does it help figure out pacing and tension?

I’ve probably written too much as chapter 25 (which is meant to be getting on for 40% through the story) is 31,000 words into my novel. In actuality, chapter 25 is probably only 25% of the way through my story. Meaning the book would come in at 120,000 if I carried on at the same pace. That or I’ve broken the rules and will speed up later. *cough*

I’m not going to do anything about this yet, at least not in this edit, but it does tell me to keep an eye on my word count.

It also tells me to watch my pace. I don’t want to race readers through the story during the first 31k only to bore them getting to the climax because I used all the action points early on. I think looking at the ups and downs there’s a fairly good rollercoaster, which if you put a line of best fit in, would gradually increase. So my pace, if I have my word count right, should be ok.

I have three consecutive chapters (8,9 & 10) all at the same tension level. Maybe that’s ok, maybe it isn’t. Without reading the book start to finish I can’t tell the impact yet. The point is, I didn’t realise until I saw it visually. Now when I send my book to beta readers I can ask them to check whether the book slows too much during these three chapters.

When comparing the chapters and the events within them to the diagram, I can see (thankfully, *wipes brow*) I’ve actually included all the plot points I should have so far *huzzah – pats pantser back* What’s also helpful, I now know which chapters they are in too!

Are you a visual writer? How do you work out your plot and pacing? Do you even need it written down? Or do you go with your gut? What techniques do you use? Let me know in the comments.

For more reading on this topic (as well as the aforementioned authors) I also recommend Jane’s post on the plot planner,