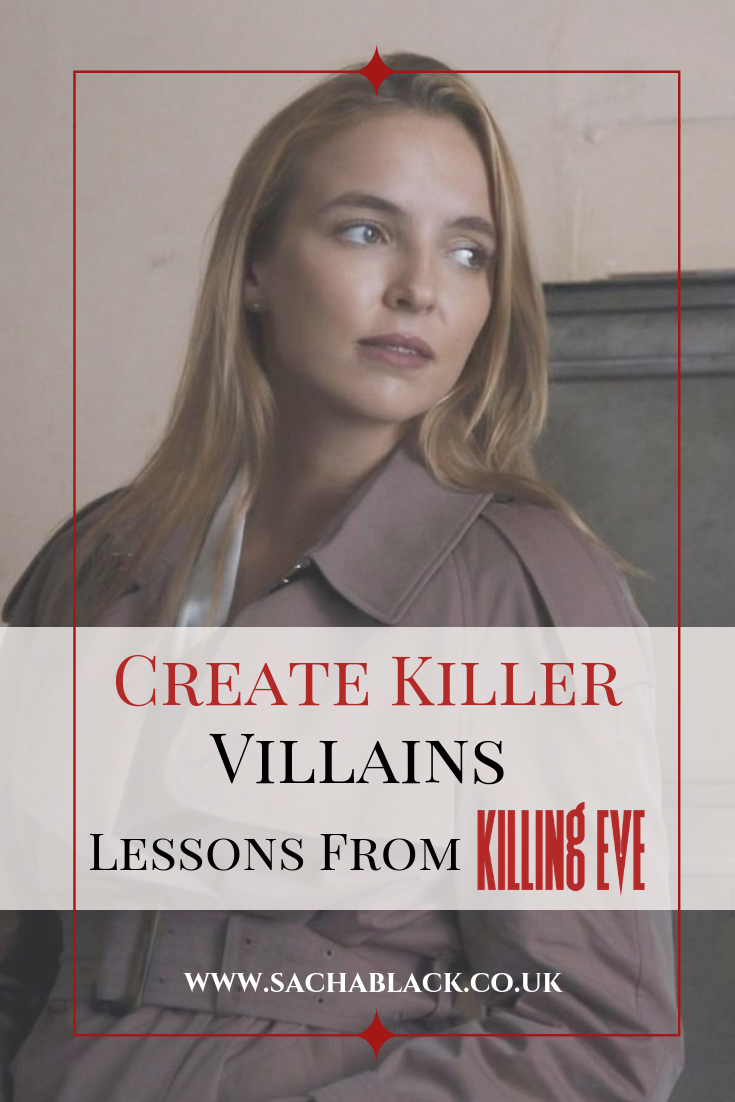 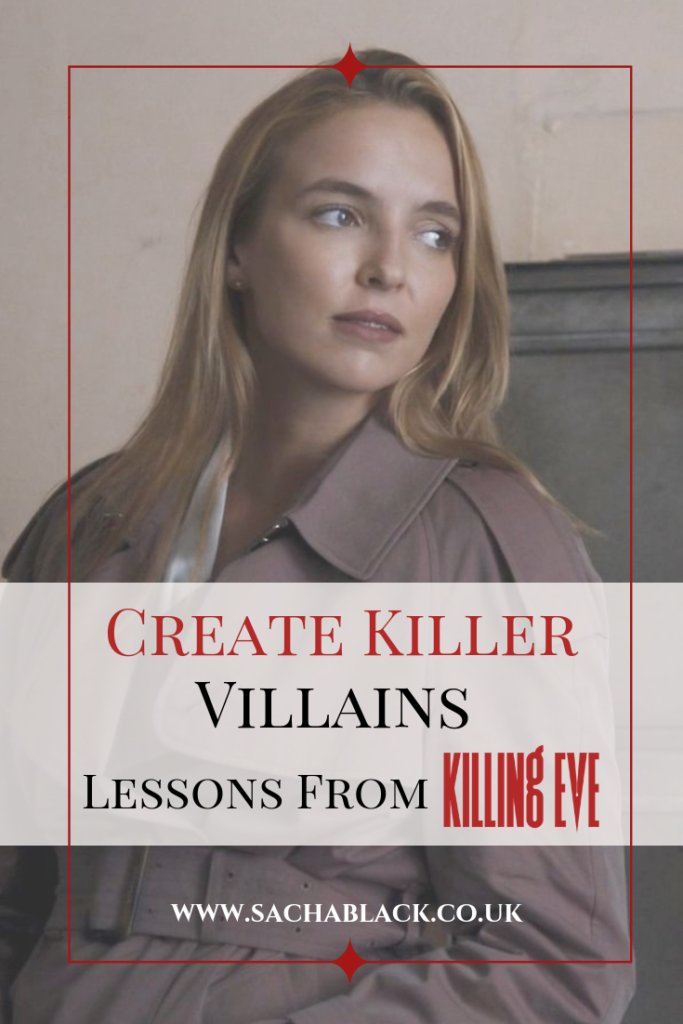 If you’ve hung around here long enough, you’ll have heard me say that a dozen times already. But heroes – no matter how much we love them – are often predictable. Something that’s the result of a soft heart and too much halo polishing. If you want to get your hero into ship shape, this book is wicked… *cough*. Moving on. After years of villain worship and intensive study and deconstruction of all the villains I can find, I’m sad to say it’s rare for me to find a villain that gives me a case of the tinglies, but Villainelle – the villainous minx – did just that. If you want to create killer villains then have a look at these tactics the writers of Killing Eve employed.Watch Killing Eve they said. It will be fun they said…

IT WAS, PEOPLE. IT REALLY WAS.

I raised a solitary eyebrow. I hate hype. I hate popular things. I was loathe to watch it. But watch it I did. And thank all of the literary gods that I did. For those that haven’t watched it, here’s a short blurb from the BBC:

“Killing Eve topples the typical spy-action thriller as two fiercely intelligent women, equally obsessed with each other, go head to head in an epic game of cat and mouse.”

Here endeth the spoiler free area. Fair warning, in order to explain why Villainelle is so good, I’ll have to talk about the plot. If you read on and you haven’t watch BOTH series, then read on at your peril.

Season 1 introduces both Eve and Villainelle. Eve is commissioned to find and capture Villainelle. But so begins a cat and mouse game that rapidly dissents into obsession and maybe even love?  Season 1 ends with Eve finding Villainelle. They’re alone in V’s apartment. Eve, knowing Villanelle is attached to her, leads her to the bedroom where she seduces and then promptly stabs her! Cliffhanger, Villainelle vanishes.

Season 2 opens with Villainelle in hospital and Eve wracked by obsession: she knows Villainelle is alive. Her obsession rapidly leads to the demise of her marriage, her job, her life.

Okay, that’s a nuff plot. Let’s get to the good bits.

Villainelle pushes Eve way outside her comfort zone. Their obsession with each other mingles and blurs the lines of good and evil to the point that Villainelle essentially coaxes Eve into killing someone. Granted Eve kills a villain, but it’s not the point is it my little wordsmiths? Eve killed a man. Eve’s meant to be good. A hero no less. Heroes don’t actually kill people. They bring them to justice. They arrest them and put them in jail.

Eve is driven by an uncontrollable obsession with Villainelle. She doesn’t know what she wants to do with V. She just knows can’t keep away from her. V’s obsession is derived from the point of view that Eve is ‘like’ V.

I’m a sucker for romance. Slather me in it like you slather oil on a muscled torso. When you give me forbidden love… well, just look at that GIF a few paragraphs down.

The reason forbidden love works is because psychologically, we all want the things we can’t have. Everybody loves the bad boy. It’s a fantasy. And this is the ultimate display of forbidden love.

Not only is Eve unavailable… She’s married… to a man! Point is, she’s unavailable and seemingly straight.

Villainelle gives zero fucks. She gon’ have Eve no matter what it takes. More to the point, V will would do anything for Eve. Kill. Maim. Torture. Throw it all in. Mix with a litre of blood, a can of mace, a sprinkling of 9mms and were not even close to the lengths Villainelle will go.

Heroes aren’t meant to love villains. Which is why this is such an epic plot twist.

And of course, the writers keep us on the edge of our seats because Eve – poor confused little mite – goes all sexy hardcore on her hubby. Whose rather more confused

And let us not forget what Villainelle actually is. A blood soaked assassin people. A BAD ASS ASSASSIN. What makes a villain convincing is when they play to type. Which V does. She has cruise liner loads of integrity because when she says she’s going to do something, we watchers, know without a shadow of a doubt that she will do that thing.

Eve get’s stroppy with Villainelle in a coffee shop and this is V’s response:

“Don’t speak to me like that, Eve. I like you, but I don’t like you that much. Don’t forget, the only thing that makes you interesting is me.”

I think that has to be one of the most exquisitely crafted lines of script I’ve ever seen. I actually let out a gasp when I heard it. The reason it worked so well is threefold:

It Ends Where It Begins

. It’s like some gloriously fated serendipity. That’s exactly what happens with the endings of both season 1 and season 2 of Villainelle… Sorry, ‘Killing Eve’. But let’s be honest, they should have called the series Villainelle because oh sweet, sweet villainous gods it’s all about her!

This is so good because #Karma. Eve is the protagonist. Protagonists don’t get shot.

*ARE YOU LISTENING SCRIPT WRITERS?*

The protagonist getting shot is the last thing a viewer (or reader) will expect. Especially because it’s Villainelle – the devilishly brilliant villain who supposedly loves Eve – who’s doing the shooting.

But this is the glorious magic of this ending.

If you enjoyed the tips in this post, you can get more villains tips in my book 13 Steps to Evil – How to Craft a Superbad Villain.

And if you sign up to my mailing list, you get a free 17-page cheat sheet to help you create superbad villains, as well as bonus tips and my latest book news just click the button below:

Warning: These 5 Points Will Help You Create Awesome Female Villains