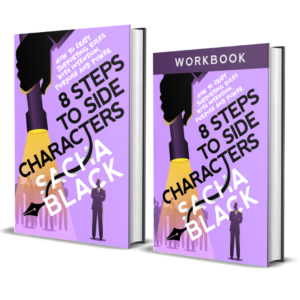 Cameo characters are fleeting and brief, they don’t need any depth, they open doors, stand guard etc. Think Stan Lee and his brief appearances in the Marvel movies. They usually have some standard label like “guard” or “girl with the teddy” and they don’t always have dialogue.

Minor characters appear more often, but they still don’t really have an impact on the story or protagonist save for transactional exchanges. Maybe they’re the barman in the pub the protagonist regularly frequents. Think Mr. Filch in the Harry Potter series, or Wheezy from Toy Story 2. They don’t have subplots and they don’t have character arcs.

Major side characters are the big guns of characters. They are likely to have subplots and character arcs, they have an impact on both the protagonist and the story and they probably have a chunk of backstory too. Think Morpheus in the Matrix or Gandalf from LoTR, Four from Divergent or Grandpa Joe in Charlie and the Chocolate Factory.

If you would like to dive into more detail about the three types of side characters as well as their impact on the story and what you need to do to make them as effective as possible, then you can by pre-ordering 8 Steps to Side Characters.

Want to order signed copies of Side Characters, then use this link:

Submit your pre-order proof here to be in with a chance of winning a bundle of goodies and to get a sneak peek look at the first 25 pages: https://docs.google.com/forms/d/e/1FAIpQLSe1IYhFhlu9vBSwell2J2tSwtIdxXMEYp-MVF-cvzixeNu22Q/viewform?usp=sf_link