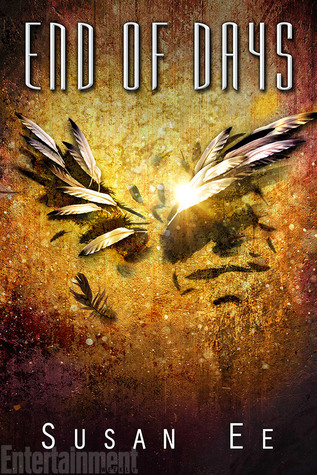 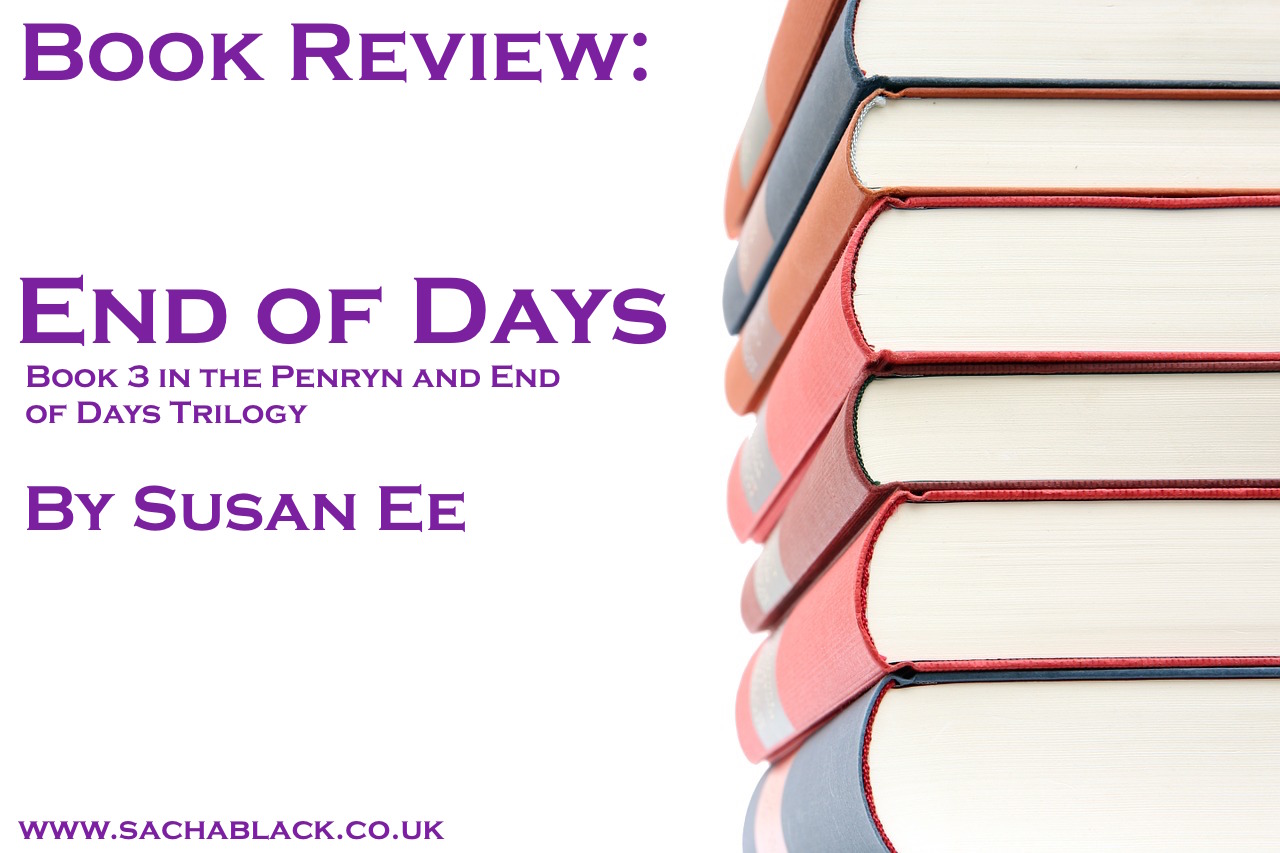 I’ve been waiting for the release of this book for the best part of a year. End of Days is the last instalment in the Penryn and the End of Days trilogy from Susan Ee. I’ll admit I felt like a kid, but I had to have it on pre-order as soon as it was available, that’s how much I wanted to read it!

Susan Ee’s trilogy is a YA/NA Fantasy/Dystopian trilogy – the same genre as the likes of Hunger Games and Divergent – the same genre I write, so I couldn’t help but read it. I adored the first book Angelfall. The second book World After was ok – but it felt much like a lot of second books in trilogies – a filler, a stop gap before the climax in the third book. (I’ll put links and photos and blurbs to the first two books at the end).

So you’re not completely lost the general background to the first two books is – Angel apocalypse – they bring war on humans the protagonist saves an angel (Raffe who happens to be an Archangel and gods wrath.) They start to fall in love – which is completely forbidden.

To End of Days, the final instalment.

After a daring escape from the angels, Penryn and Raffe are on the run. They’re both desperate to find a doctor who can reverse the twisted changes inflicted by the angels on Raffe and Penryn’s sister. As they set off in search of answers, a startling revelation about Raffe’s past unleashes dark forces that threaten them all.

When the angels release an apocalyptic nightmare onto humans, both sides are set on a path toward war. As unlikely alliances form and strategies shift, who will emerge victorious? Forced to pick sides in the fight for control of the earthly realm, Raffe and Penryn must choose: Their own kind, or each other?

I adored the first book so I was eagerly waiting for the final installment to find out what happens to the main characters. Ee doesn’t disappoint.

The book is generally quite pacey. Stylistically it’s written as an easy read. So much so that I found myself slipping through the pages, I’d blink and I’d read 15 chapters. The chapters are short which helps to keep the pace too.

The main character Penryn, is a really loveable protagonist, you can’t help but want her to ‘win’. She sucks you in and makes you feel for her. Ee beautifully depicts the raw emotions that teens really do feel. I found myself grinning at her first kiss, feeling her pain as she’s rejected and the desperation for her to get the boy. This really, is a love story at its heart. For me, the rest of the plot seems to disappear into trivialities, did I actually care who was elected as the new messenger? Not really, I was too busy caring about Penryn and Raffe. The characters really are exceptional. I imagine they are relatable to an entire generation of YA readers and those who are not quite so YA anymore… *cough*.

What I like about this series is that it is ‘real’ Penryn’s mother has mental health issues, and her sister… well, I will let you read and find out what happens to her. What Ee does, is touch on gritty real life issues in her fantasy genre (albeit mostly in the first novel). I like this, because a lot of novels in this genre don’t do that.

The novel builds to a wonderful crescendo. I did find the last 20% of the novel smidge slow. After the pace of the first two books and the first two thirds of the final book, it felt like a lot of fannying around to get to the ending we all knew was coming (and wanted). There was so much description and nothingness in the last few chapters before the final battle commenced.

But the actual ending? Well I got what I came for – I was thoroughly satisfied with the outcome.

That being said, this is my only other critique. The book got to the crescendo – what happened, happened and then it stopped dead. If I had a physical copy I would have flicked the pages over going ‘Huh?’ Don’t get me wrong, it was exactly what I wanted, but it was so good, I sort of wanted to know a bit more, I needed just a tiny bit more closure.

Thankfully Ee wrote an epilogue… I breathed a sigh of relief and then read it… Sadly it didn’t add anything to the book, plus it ended even more abruptly than the novel. It was two utterly random pages of nothing, and as I finished it I genuinely frowned and say ‘is that it?’… out loud, in the middle of the night with my wife asleep in bed next to me (she wasn’t impressed at being woken up!)

Am I complaining? No, not really. At the end of the day I got what I came for. I loved the characters, the plot and the overall ending. Would I recommend the trilogy? You’re damn right I would – especially to YA fantasy/dystopian readers.

There are two other reasons I love Susan Ee:

Final Book Rating: 4 out of 5 because unlike Veronica Roth, she gave us the ending we all wanted!

I’m going to give the overall trilogy two ratings – For anyone who doesn’t read the genre I’d say 3 out of 5 – it probably won’t set your world on fire, but it’s a good easy read and wonderful story with fantastic characters.

For anyone who does read the genre I would give the overall trilogy 4 out of 5. You will love it. It’s everything you want from this kind of series.

If you want to buy the trilogy you can visit here: 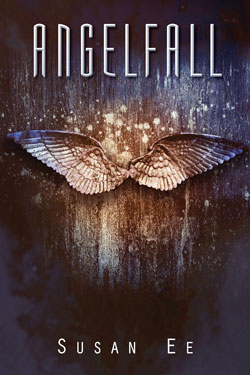 It’s been six weeks since the angels of the apocalypse destroyed the world as we know it. Only pockets of humanity remain.

Savage street gangs rule the day while fear and superstition rule the night.

When angels fly away with a helpless girl, her seventeen-year-old sister Penryn will do anything to get her back.

Including making a deal with the enemy. 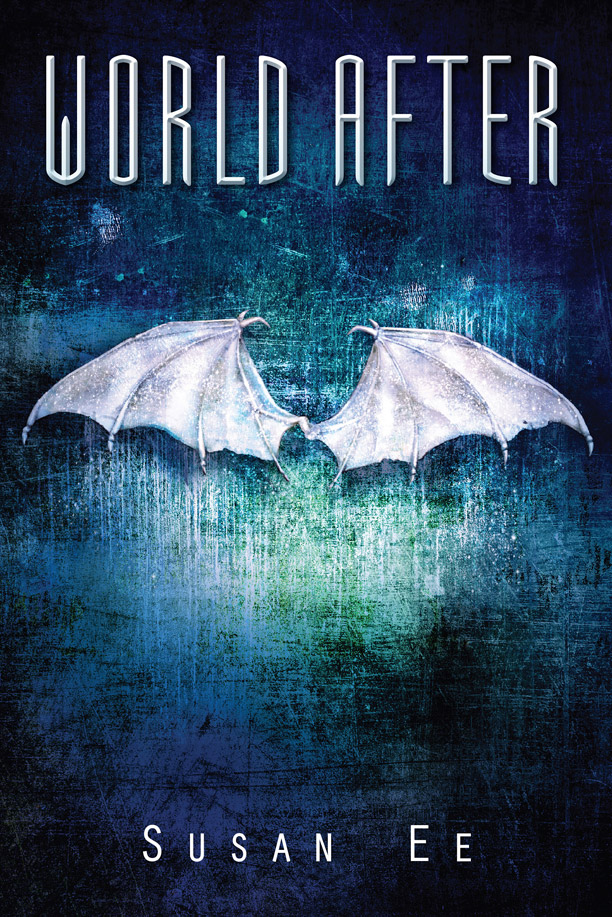 In this sequel to the bestselling fantasy thriller, Angelfall, the survivors of the angel apocalypse begin to scrape back together what’s left of the modern world. When a group of people capture Penryn’s sister Paige, thinking she’s a monster, the situation ends in a massacre. Paige disappears. Humans are terrified. Mom is heartbroken.

Penryn drives through the streets of San Francisco looking for Paige.

Why are the streets so empty? Where is everybody? Her search leads her into the heart of the angels’ secret plans, where she catches a glimpse of their motivations, and learns the horrifying extent to which the angels are willing to go.

Meanwhile, Raffe hunts for his wings. Without them, he can’t rejoin the angels, can’t take his rightful place as one of their leaders. When faced with recapturing his wings or helping Penryn survive, which will he choose?

After a daring escape from the angels, Penryn and Raffe are on the run. They’re both desperate to find a doctor who can reverse the twisted changes inflicted by the angels on Raffe and Penryn’s sister. As they set off in search of answers, a startling revelation about Raffe’s past unleashes dark forces that threaten them all.

When the angels release an apocalyptic nightmare onto humans, both sides are set on a path toward war. As unlikely alliances form and strategies shift, who will emerge victorious? Forced to pick sides in the fight for control of the earthly realm, Raffe and Penryn must choose: Their own kind, or each other?