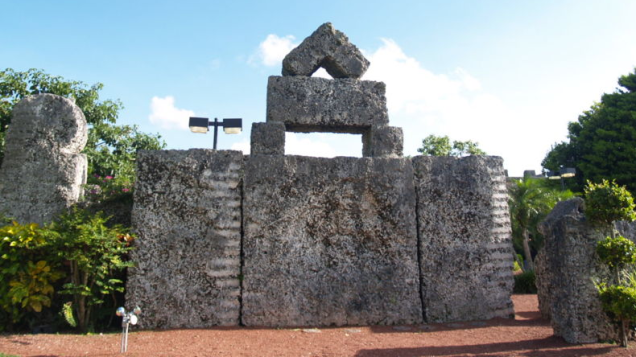 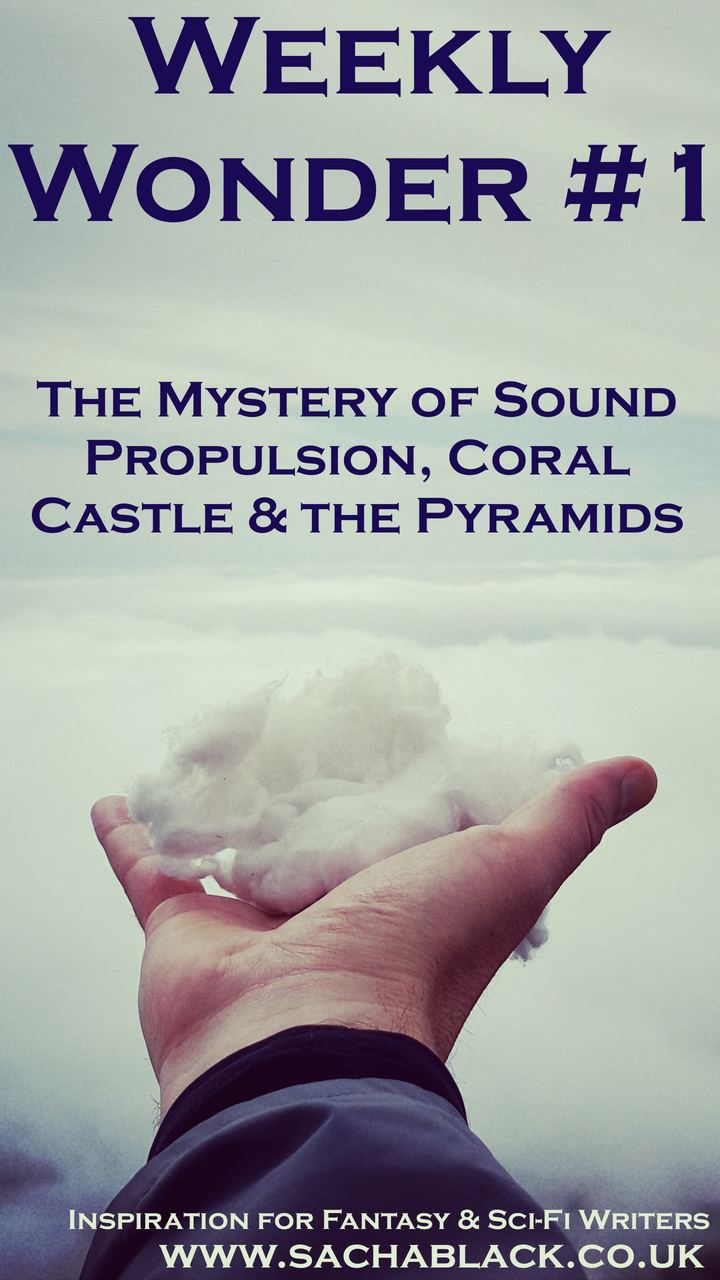 I spend a lot of time sharing things I learn about the writing process. But after some lengthy discussions with fellow blogger Ali, on what inspires us she encouraged me to begin sharing some of the more ‘strange and unusual’ things I find inspiring.

As a Fantasy and Sci-Fi writer whilst my own imagination is useful, it sometimes needs a little help. Which is why I spend a lot of time researching the strange, unusual or controversial – I find it provokes lots more story ideas than the mundane.

It’s at this point I want to add a little disclaimer: any information put into these weekly wonder posts do not represent my opinion. They are merely a collation of facts, proposed theories and interesting concepts I have collated here because I found them interesting enough to be inspired by them.

The properties of sound are usually thought of as musical, and entertaining. But sound propulsion and the ability to move objects using sound waves is fast becoming a tangible concept.

It is said that the mystery of Coral Castle can be explained through sound. Coral Castle a 1100 ton stone structure, built single handedly by Edward Leedskalnin, a 5ft, 100 pound Latvian gentleman between 1923 and 1951 in Florida USA.

Now, granted levitating a foam cup with sound waves is quite different to levitating a 28 tonne rock. But this is the mystery that surrounds the sculptures. Leedskalnin worked alone and at night shrouded in mystery so that no one knew how he had done it. Crystalinks website explains the wonder of the entrance to the castle:

“it’s made through a gate fashioned from a single coral block weighing nine tons. This miraculous monolith is approximately 80 inches wide, 92 inches tall, and 21 inches thick. It fits within a quarter of an inch of the walls on either side and pivots through an iron rod resting on an automobile gear. The enormous block balances so perfectly on its center of gravity that a visitor can easily push it open with one finger. People who are sensitive to electromagnetic energies fields will sometimes report headaches while standing inside the archway of the nine-ton swinging gate – door – thought to be over a vortex – and a major grid point of the planet.” 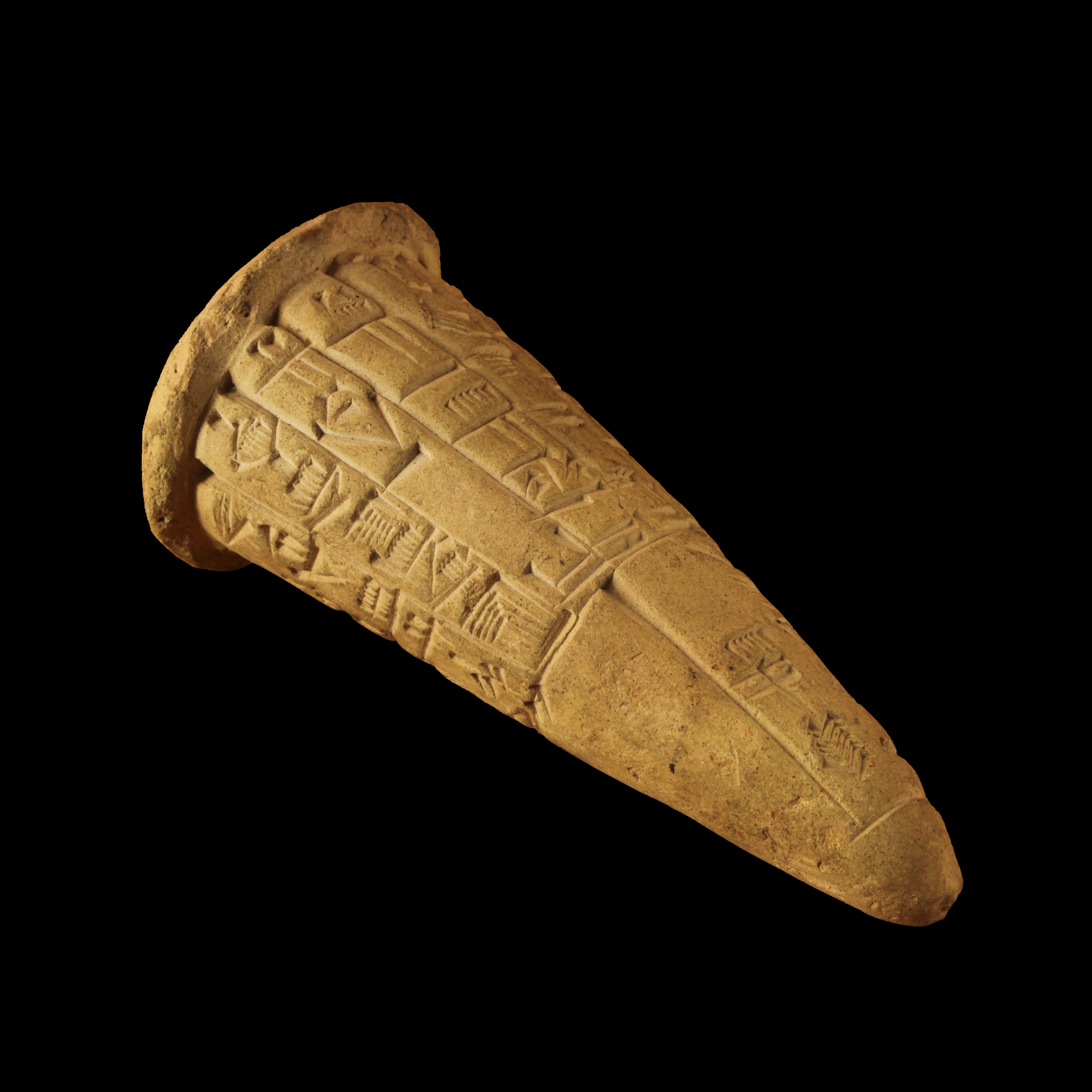 So how DID he do it? There were rumours Leedskalnin used strange cone shaped objects which emanated sound to levitate the enormous stone objects.

Cone like objects similar to the one on the left. This particular one however, is rather more ancient. It’s thousands of years old and covered in cuneiform scripture. An extremely ancient language developed by the Sumerians 3000-3500 BC.

I visited my favourite museum recently the British Museum in London. I was aware of a theory of sound propulsion to build the Egyptian pyramids, but I hadn’t seen any evidence suggesting it. 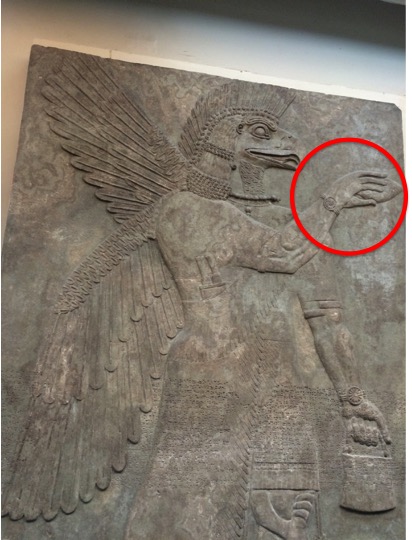 I was in the museum that I found some evidence of these cones from in and around that era. The cone highlighted in the red circle, wasn’t just on one or two of the carved statues, but on dozens of them across various different sculptures, and interestingly from different cultures, Egyptian, Sumerian, Babylonian…The other interesting thing in the photo, is the bracelets the creature is wearing. Two identical bracelets with a circular plate. Kind of like a watch… I wonder what they did, and why there are two of them.

There is a debate that rages, about how 3-5000 years ago this sound technology was invented. Could it have been invented then? Some outright refute the claims, supporters of the ancient astronaut theory suggest an alien race gave the technology to humans. 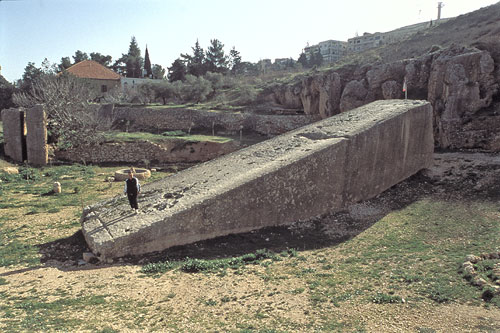 There are similar theories around many of the ancient stone structures like the Pyramids or the stone of the pregnant woman in Baalbek, Lebanon. Which is a 1650 tonne monolith block that was partly moved, and then abandoned. No one knows why it was abandoned but it was meant to be used in a Roman temple close by. There are alternative, and possibly more plausible theories that suggest, this, and various other buildings like the Pyramids were built using ropes and pulleys and round wooden-bobbin like structures to roll the stones. I always thought that a little odd though, stone being heavier and denser than wood, surely it would immediately crush the bobbins?

Which theory is true? And what does it all mean? I don’t know. Maybe we never will. But I certainly found it interesting and it made my mind race with ideas about technologies for future or past races other things sound could do and lots of other stories. What do you think? Did you find this interesting?

I’ll leave you with a quote Leedskalnin is famed for saying repeatedly:

“I have discovered the secrets of the pyramids, and have found out how the Egyptians and the ancient builders in Peru, Yucatan, and Asia, with only primitive tools, raised and set in place blocks of stone weighing many tons.”