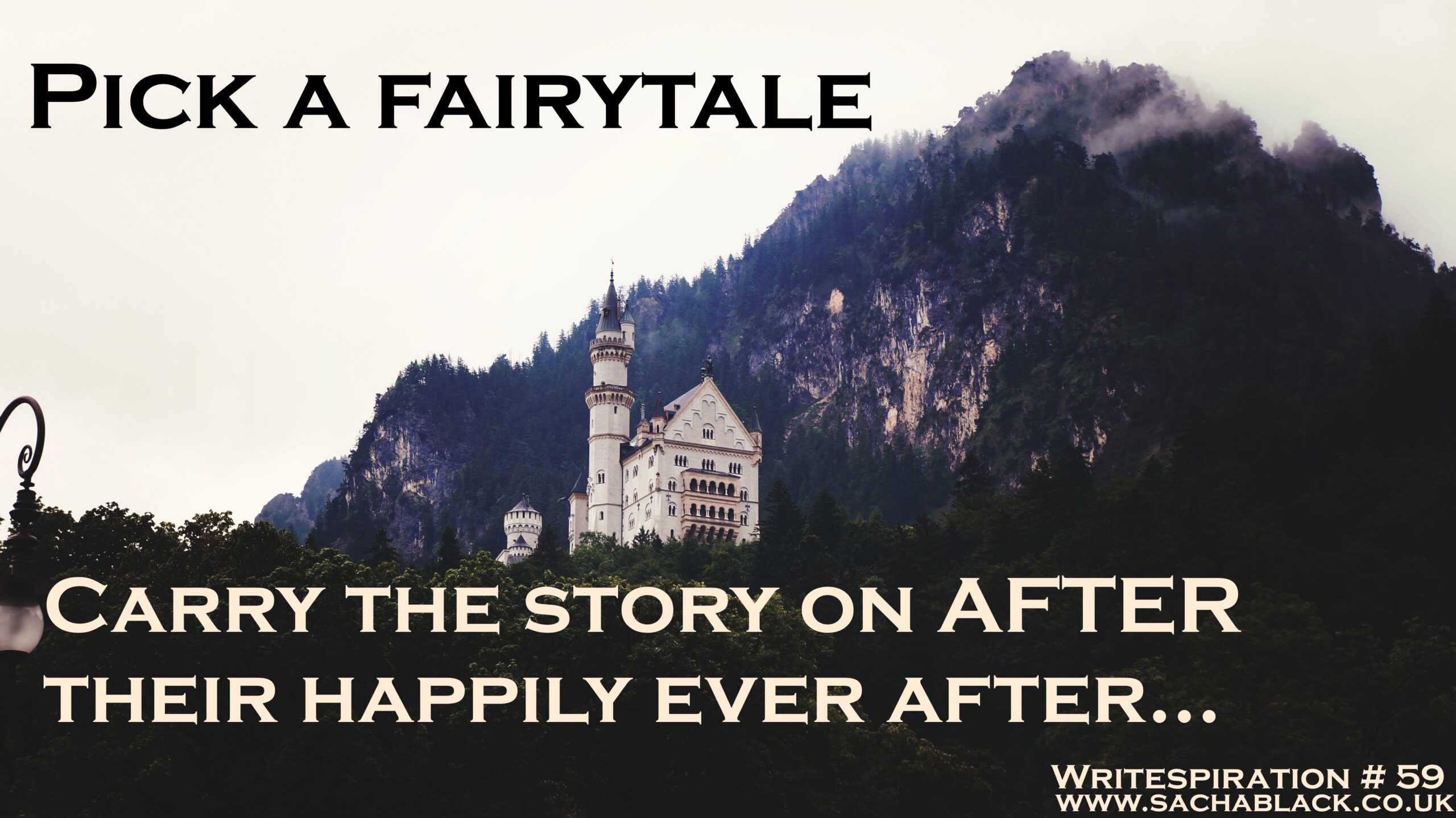 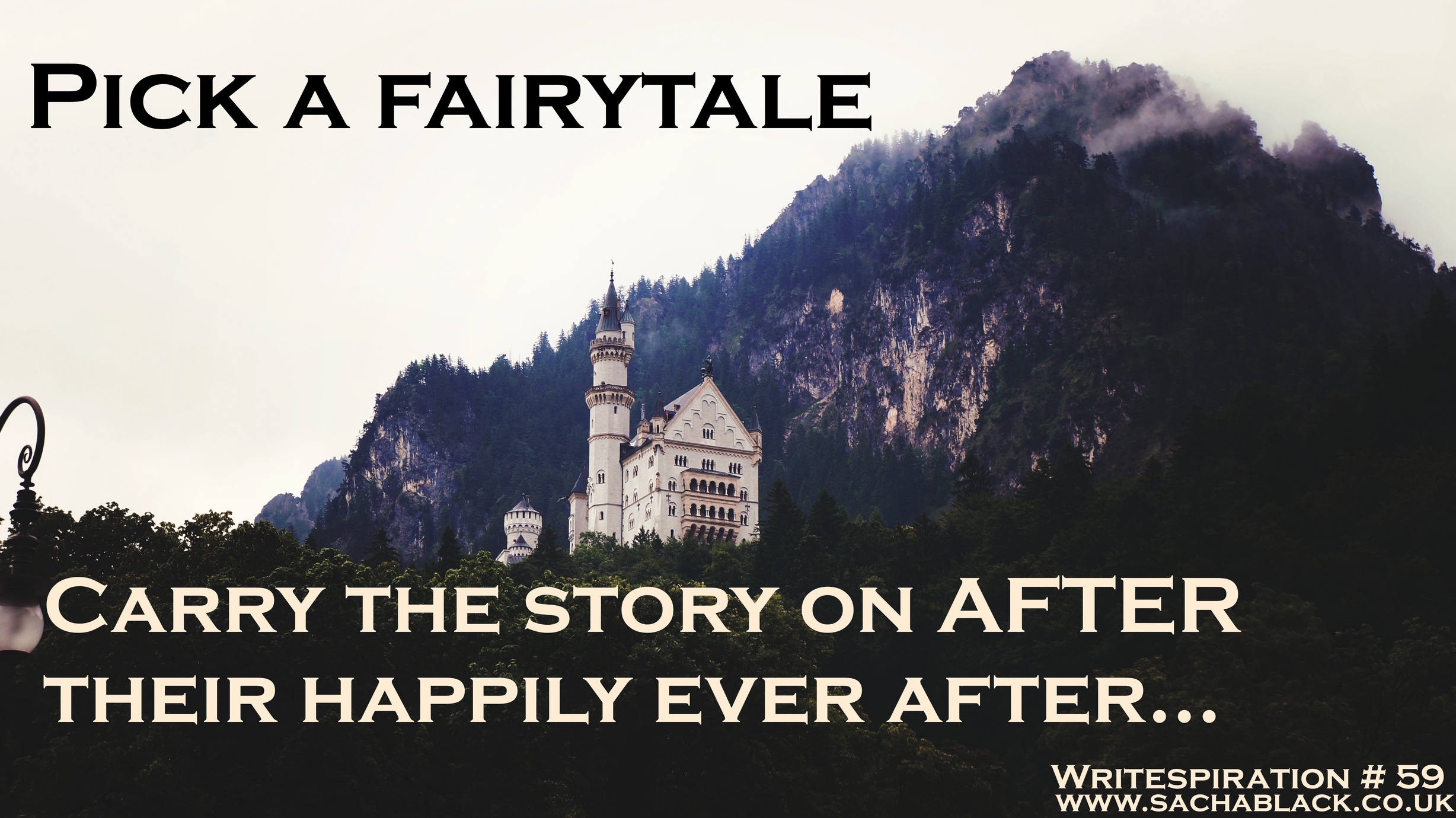 I love a good fairytale. I read dozens as a child, but even as an adult I love them, partly because I am a sucker for a ‘happily ever after’ but also because of their appeal and simple storytelling. Lots of people have remade fairytales too, Marissa Meyer for one, I’ve read Cinder (The Lunar Chronicles Book 1)

, obviously, it’s YA! But there are loads more take, Splintered

Anyway, now I am an adult, I know happily ever after in most cases, is total bullshit!

So, my challenge to you, is to pick a fairytale. Don’t care which, and don’t mind whether you do it in a poem, flash or full blown short story. But, what I want to know is: What happened AFTER happily ever after…?

I will post mine with the responses next week – haven’t had a chance to write anything this week – as you can tell by the delayed Wednesday Writespiration!

Now, to last weeks writespiration which was all about dialogue.

Enette a newbie to writespiration was the first to enter last week with this heart wrenching goodbye.

“Don’t go”
“They need me.”
“I need you.”
“No you don’t. You’ve never needed anyone.”
“I need you.”
“You are stronger than that. It’s what I love about you.”
“What if you die?”
“Then you will go on with your life.”
“How could you say such a thing? Am I not allowed to love you? Am I not allowed to mourn?”
“I didn’t mean it like that. You are the strongest person I have ever met, if anything happens to me I know that you will keep your head up.”
“I don’t want you to go.”
“I can never forgive myself if I know that I live because others died.”
“And how do you expect me to live without you?”
“I think that’s something for you to discover on your own.”
“Please don’t just walk to your death.”
“Keep your chin up, Moira.”
“I’m begging you, don’t go.”
“I have to. Who knows perhaps I’ll actually make it back”
“Please, just stay.”

Jane Dougherty next, and boy is she a master at dialogue. As an explanation, this is from her novel, she’s redacted all the description and bumph around her dialogue and still left a cracking story.

“You all right?”
“Can’t see any blood. Mind you, I can see feck all, so it’s possible I’ve lost a limb or two.”
“The building must have come down on top of us.”
“Lucky we’ve got such thick skulls.”
“There has to be a way out. Seems a bit lighter over that way…”
“Careful, Carla. There could be aftershocks.”
“Yeah, exactly. I’d rather not be in here when they hit. It is lighter over this end. Tully! There’s a way out. I can see… Porca miseria!”
“I’m here, I’m here! What’s up? Are you okay?”
“Look out there.”
“Jesus! What in the name of…”
“Tully, where are we?”
“Looks like half time in the War of the Worlds. Let’s go back. There might be a back door.”
“Just for once, can you be serious? How can we go back? Back where? It was the end of the world starting, remember?”
“Looks like it’s over now, so we’re in luck there, at least.”
“I don’t fancy going out there. Not till they put the fires out and those cracks in the ground stop opening and closing like that.”
“Tough! Now just turn around slowly, and don’t try any funny stuff.”
“Who said that?”
“He did.”
“The dwarf with the Kalashnikov?”
“I’m not a dwarf! I’m eleven.”
“Whoever you are, put that fuckin’ thing away before it goes off!”
“Nah. You’re coming with me.”
“Where?”
“Shopping mall. Ace wants to see you.”
“Who’s Ace?”
“The boss. You mess with Ace and he’ll pull all your skin off. A little bit at a time.”
“Okay. Just askin’. You said you were out of deodorant, didn’t you, Carla?”
“Does your mother know where you are?”
“Nobody knows anything anymore. Now move it!”

Geoff, and his extraordinary talent at always smashing these writespirations. This week he has a seriously witty piece with his character narrating his life so he can write a book. It’s proper good. Have a read:

In so many words

‘He stood watching, his heart pounding…’
‘What is this, Clive?’
‘… like that steam train he loved going on…’
‘Are you writing a book? Is that it?’
‘…as a child, the one with the red and blue livery and the…’
‘Use shorter sentences. It will have more impact.’
‘… six carriages. Meanwhile. Back. In. The….’
‘Ha bloody Ha Clive. If you’re going for the humour genre, I’d suggest better jokes.’
‘… restaurant car, Sally sat alone.’
‘Don’t use my name. You know I don’t it when you write about me in your blog. I…’
‘A chill made her shiver. She turned…’
‘A bit clichéd don’t you think?’
‘… and saw him framed in the doorway, his muscular frame…’
‘I don’t like ‘frame’ and ‘framed’ so close. What about silhouetted?’
‘… his muscular silhouette…’
‘Better but still corny.’
‘…rippled and he thrust…’
‘Eeew, a bit fifty shades, isn’t it?’
‘His hand towards her.’
‘Clive? What’s going on? What’s with the hand?’
‘Slowly and sensuously she peeled back his fingers one at a time…’
‘You know I don’t do sensuous. What…?’
‘Revealing…’
‘Oh Clive!’
‘Twinkling in the refracted light from a thousand…’
‘Yes, you oaf. Yes. And shut up and kiss me.’

Next, Sarah, who has written this hilarious piece.

“Dude, this is a once in a lifetime opportunity.”

“The only thing that’s truly ‘once in a lifetime’ is dying.”

“Whatever, dude. They still bring people back. So they die, like, twice.”

“Or more. Sometimes they have, like, twelve heart attacks.”

“No. They really don’t. Fine. Actual death is the only ‘once in a lifetime’ thing. The end. Leave me alone.”

“Not really. They rise again. They’re sort of alive. They talk and think and eat.”

“And zombies. They’re sort of living. They… Well, not sure if they think much but they walk and eat.”

“You. It’s still you. And I’m still not going out with her.”

Last but by no means least, Mark, who had a go at this type of challenge last year, check out his romantic story post.