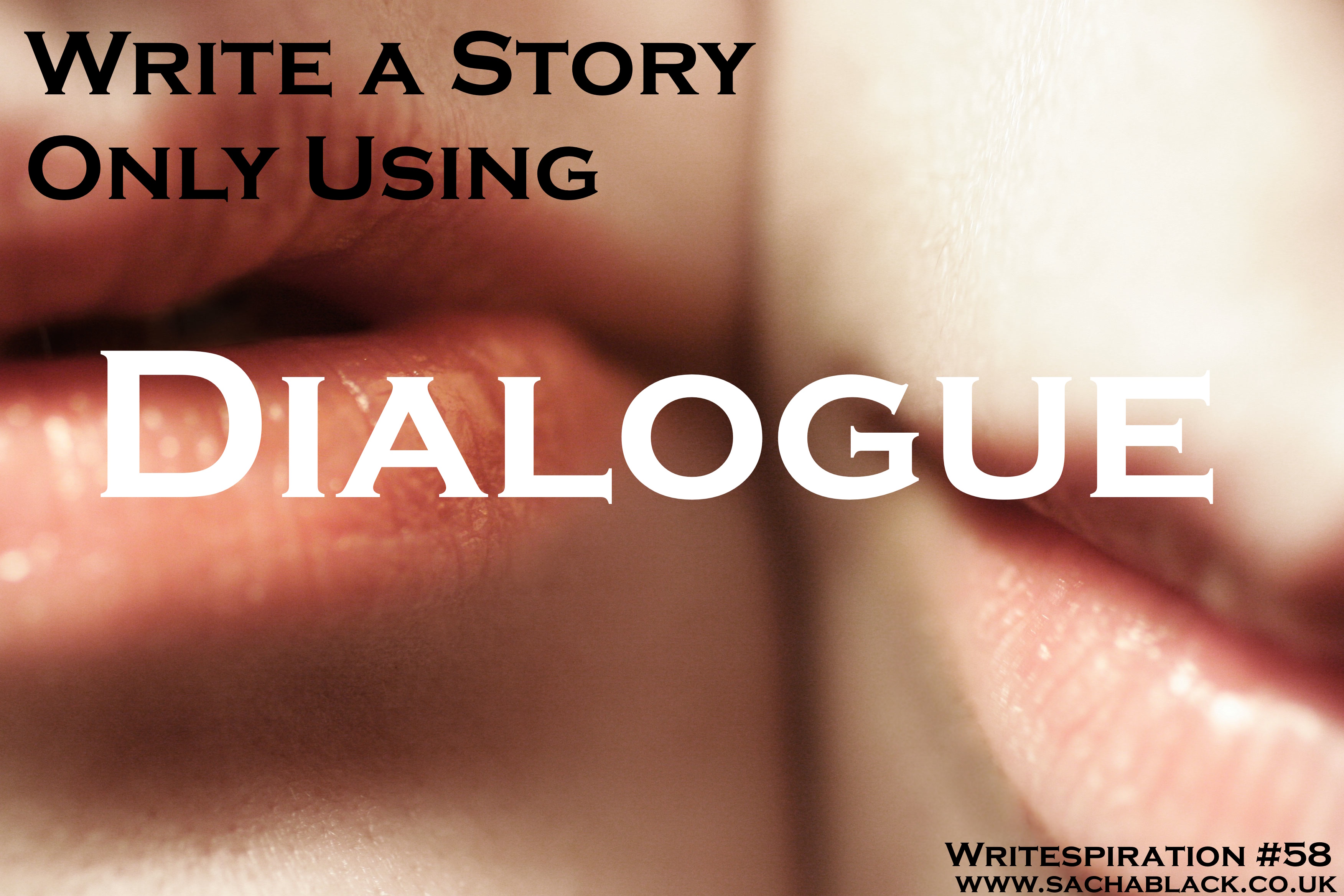 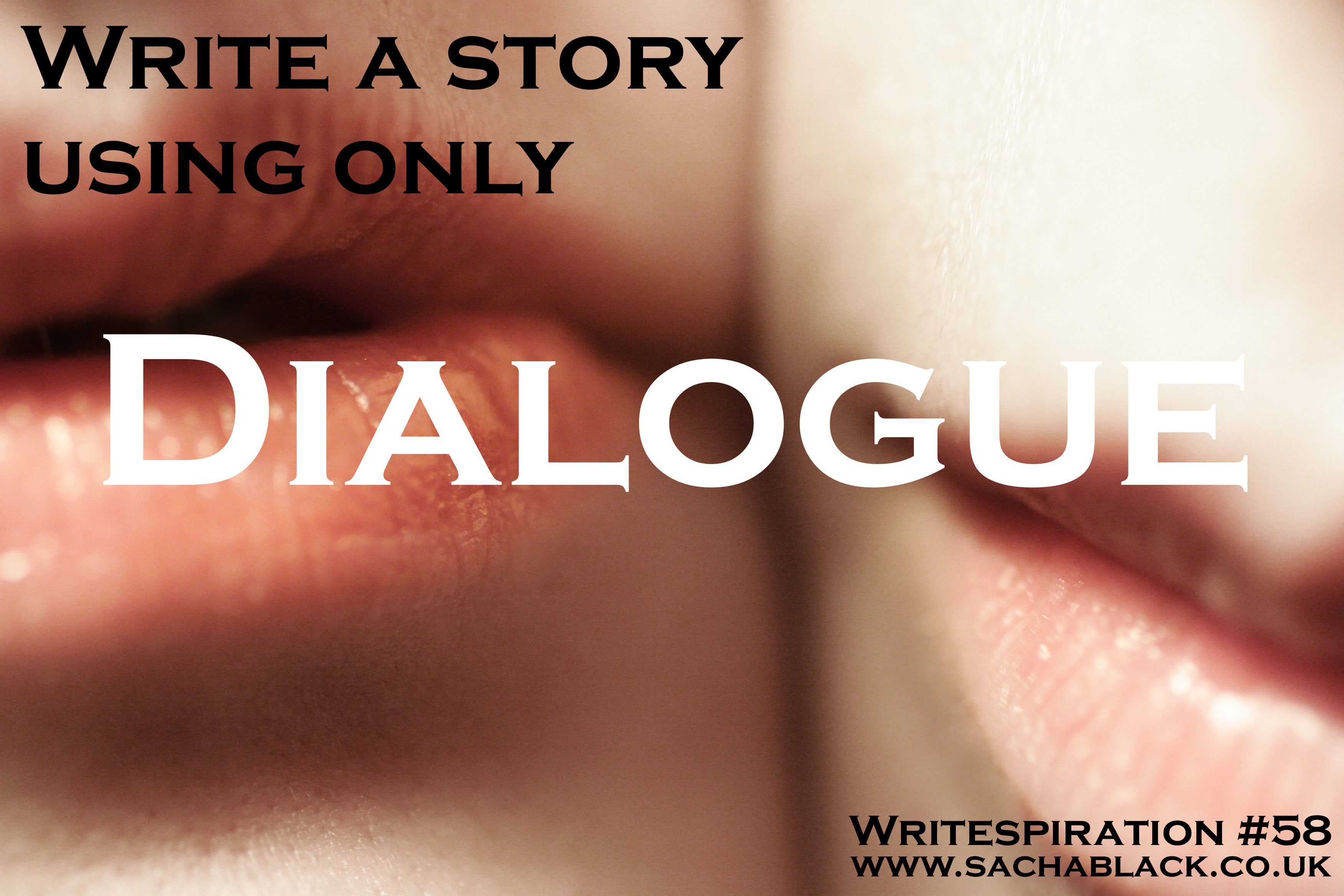 Yesterday I had a post from Geoffle on differentiating dialogue, so in his honour, this weeks writespiration is a test of just that. Your challenge, if you choose to accept it, is to write a story using dialogue only…. no tags, no explanation, nothing…

Here’s mine and if you’re not a fan of swearing, I’d skip over mine this week:

“Exactly that babes. Proper cut him, he did. And you don’t need to waggle your fucking fingers at me neither. It’s the gods honest truth.”

“You can’t swear at me ma’am. But, your partner, cut him up how exactly? On a roundabout or something?”

“Sorry, Ma’am. I really am going to have to insist you explain rather more adequately, there’s a queue forming behind you. And please stop rolling your eyes at me, this is my first day.”

“Look, sweetheart. The prick, that’s Mike by the way, accused my fuck buddies mother of shagging his sister. So he cut Mike…With…A…Knife… Got it? That gay shit ain’t right, if you ask me Mike deserved it. But cause he bled, he wanted revenge, so that little runt Mike cut my dogs leg off. So now you need to arrest him. Got it sweetheart?”

“If you call me sweetheart again I am going to arrest you.”

Now to last week’s writespiration, which was all about characters feeling intense emotions.

First up Linda, from Lindasbookbag, a newbie to writespirations and what a cracking entry for a first go. This packs a hell of an emotional punch. Get your tissues ready:

He looked at her lying there shrunken in the bed and felt sorrowfully glad they’d won the fight to move her to the peace of the hospice away from the clamorous and impersonal ward of the hospital.

Her thinning hair left a smudge of brown dye on the pillow from a failed last ditch attempt to stay young and cover the downy grey. Her skin, wrinkled in lines across her face like the road map of their lives, remained silky and soft to his cautious touch. He wanted so much to touch her one last time. His hand, still large, but gnarled now, navigated the tubes and wires and he brushed the pad of his thumb across her cheek.

She opened her hazel eyes and looked at him steadily. The fading light in them was still a blazing beacon to him. Sucking in air with effort, her voice was wispy like smoke although the memory was strong. ‘Do you remember,’ she asked, ‘Our first walk along the brook at dusk. The bats were circling and I was so afraid.’ Her lips curved upwards and his heart soared to see the smile he’d known for almost seventy years.’ I’m not afraid now.’

‘I remember,’ he said, the corners of his eyes crinkling at the recollection. ‘I’d waited weeks to pluck up the courage to ask you to walk out with me and when I finally did you laughed and asked me what took me so long. ‘

She smiled but he still noticed the wince of pain that action caused her. ‘I’ve loved you every minute of our time together.’ With effort she moved her arm and clasped his hand in hers.

‘And I’ve loved you too.’ He was fighting the urge to weep, not wanting her last memory to be a sad one.
‘I know,’ she told him. ‘I always knew.’ Gazing steadfastly into his eyes she allowed her lids to close slowly. The pain in her face seemed to smooth away and he was aware of a silence in the room. He realised the sound of her wheezing breath had stopped.

Next up Geoff with a twist on emotion that will have you grief stricken and slightly disturbed! Geoff has just published a new book, find out more here.

When you look into an open coffin, what are you meant to feel? Grief, sure. Anger at an early end. Sadness for everyone’s loss. But relief? Not their relief from the pain and discomfort of dying but yours. No longer will those ruby lips throw accusations at me. Never more will those liver-spotted fingers point their fury towards me. No more the ghastly embarrassment of changing your clothes after another accident. Of all those weapons of torture: mouth, hands and bowel, the stilling of the bowel is the most welcome. I look at your face in repose – dustied with powder like flour on a saggy white roll – and know that, no more will those eyes of yours pop open with their mix of hate and disgust and, yes, desperation. And as with every time I’ve felt relief – A level results, telling dad about the car and him laughing, the test results coming back negative – it’s followed by a gnawing emptiness. Not joy, exhilaration or any of those toss the hats in the air moments. Just a hollowed out nausea. That’s what it’s come to, mum. After the battle the PTSD – I’m your last victim and I’ll always be so.

Next Dr. R also known as Dwayne, and another newbie to writespirations, and a cracking war piece he started with:

After years of agonising length and the long, sleepless nights thinking about the events of that poignant day, the vision of confronting the men responsible for causing him so much pain, so much suffering, pumping his heart full of anguish, it seemed like it was all too much to handle and yet the sergeant survived all those years without tearing his very self apart. His eyes glittered, he reminisced about that fateful day often, the events of that day still fresh in his mind. For years, the sergeant fought tooth and nail to stop himself from going crazy, trying to keep his sanity by plotting, thinking of a plan that would right all the wrongs that happened on the day where he saw the blood of his many comrades strewn all over the battleground. “The offensive was a disaster waiting to happen, it should never have been authorised” the sergeant muttered to himself, his voice full of bitterness. His comrades or brothers in his eyes had given their lives up for a lost cause, a waste of human life. The sergeant wanted to make the men who sent his brothers to their death to pay for their crimes, but as he was in the midst of his rage, reality cruelly set in.

He realised that no amount of plotting, no amount of anger or tears shed would turn back the time. The men who he wanted to pay had all already gone to the afterlife, joining all his brothers already there. The sergeant was no longer a fit man, he was an old, frail man, a shadow of his former self. His eyes weakening by the day but they still glittered. In his head, he imagined his brothers finally being able to confront all those foolish men, who sat on their backsides whilst they slugged it out during the warfare. These foolish men demanded respect when they had earned none themselves but now it was the time for these fools to atone for the errors of their ways and one day, the aged sergeant will also visit the afterlife, to re-unite with his brothers and truly be at peace.

Finally Ali who as always writes highly emotional pieces that never fail to produce amazing imagery. Ali has also just published a new book full of retellings of Irish myths, which you can find here.

I should have been more careful. I shouldn’t have let it happen. My life was never meant to be like this, but I was so young, so malleable, so full of despair. Mothers are meant to love their babies, not look at them and feel nothing. But after you were born, all I felt was empty inside, torn apart, bereft of something I couldn’t put words to.

I never wanted you. Everyone said, “Oh, you’ll come round, you’ll be fine, your natural maternal instinct will kick in.” But it didn’t. Why did I listen to them? I should have swallowed that pill, visited that clinic, and got on with the life I’d planned.

Instead, I hid from the truth. My belly swelled, and your heat blazed while my world shrank and my mind froze over beneath the torpor of winter.

You were born in the optimism of spring. You took your first look at me and wailed. I sat stiff and unyielding as the midwives forced your bawling mouth onto my breast, and I endured.

That’s what motherhood was to me; endurance, nothing more. I wish I could say otherwise. And I pitied you, that in the luck of the draw which matched parents with offspring, I was all you got.

You were still so tiny when I made my decision, but I was resolute. I did what I had to do, and throughout, I felt nothing. I believed it was right for both of us. I thought we didn’t deserve each other, but I couldn’t have been more wrong.

When I gave you up, I finally understood, but by then it was much too late.