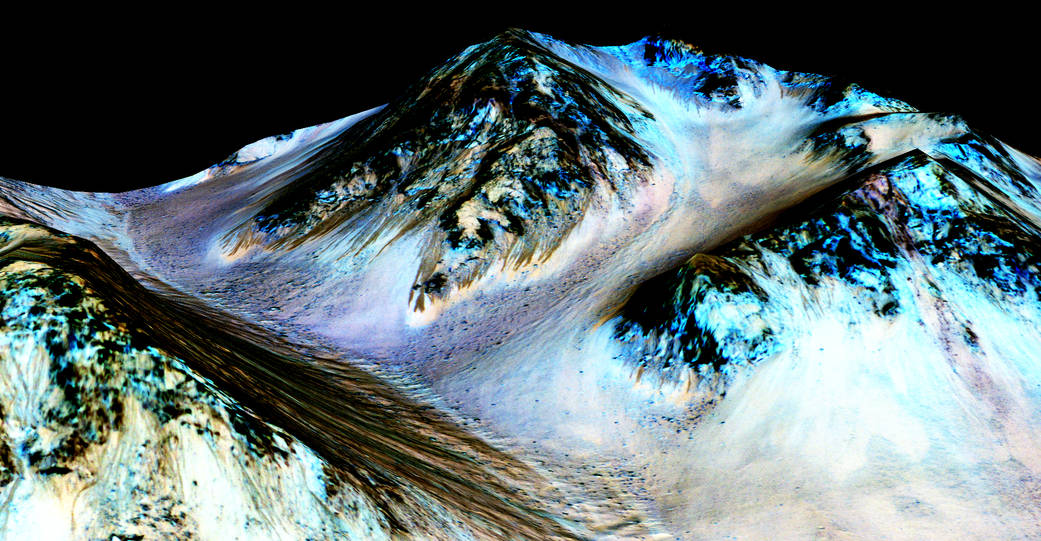 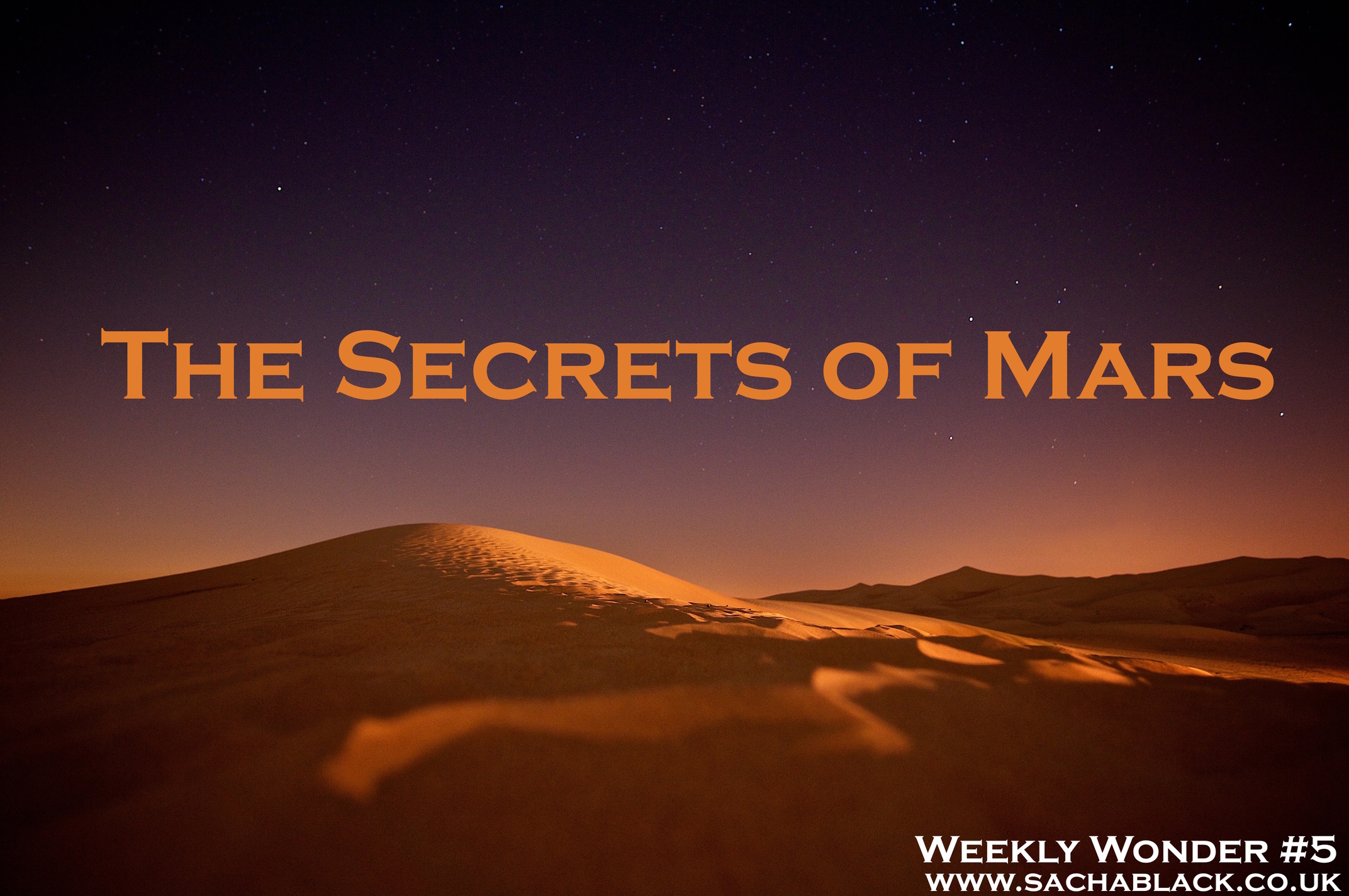 Ironic really, that the week before Martian the new Matt Damon film was released, NASA confirm there is water on Mars. Is it just me, or has anyone else noticed the frequency of ‘information’ releases about extraterrestrial life has increased significantly over the last 5 -10 years? I guaranty, give it 20 years and we will be told there is life out there. Quite frankly, I’m gobsmacked NASA didn’t release the fact there are microbes in the water on Mars as it is.

I mean, isn’t that a given? What water doesn’t have microorganisms and amoebas in it. I mean seriously, there isn’t even bacteria in the Martian water??? Doesn’t anyone else find THAT harder to believe than the fact there’s water on the planet?

This is one of the photos of Mars taken by NASA.

What you are being shown sadly, is false colour. They do this a lot and spout reasons like ‘it makes it easier to see and differentiate what they are trying to show us.’

Show me the real image, the real colours… why do they assume changing the colours is better than using an arrow to point out what they need to? Changing colours leads to all kinds of wrongly accepted information. Like, did you know the moon isn’t grey?! Yeah. For real. It’s sandy red coloured.

You can see that from official Chinese Jade Rabbit photos and video footage – watch the video right through to the end – the second half of the video is in colour and shows the moons real surface colour.

In the photo above, and below, you can see “Dark, narrow streaks…formed by seasonal flow of water on Mars. The streaks are roughly the length of a football field…are formed by briny liquid water”  you can read the full story on NASA’s website. In addition, if you want to see some awesome and seriously inspirational photos in a collection, check out Flipboard.

NASA go on to explain that the water flow is intermittent, due to temperature fluctuations, they say,“They appear in several locations on Mars when temperatures are above minus 10 degrees Fahrenheit (minus 23 Celsius), and disappear at colder times.”

But by far the most interesting thing they say is this, from astronaut John Grunsfeld:

“Our quest on Mars has been to ‘follow the water,’ in our search for life in the universe, and now we have convincing science that validates what we’ve long suspected,” said John Grunsfeld, astronaut and associate administrator of NASA’s Science Mission Directorate in Washington. “This is a significant development, as it appears to confirm that water — albeit briny — is flowing today on the surface of Mars.”

“Search for life…. validates what we’ve long suspected.” Yeah…  just read that first sentence again, Anyone else notice how he’s admitting by omission the fact they know there is life out there? What’s frustrating, is that they freely admit have the technology to detect what they term ‘signatures’ of salts and minerals in the water. That means they can detect trace or microscopic amounts of minerals You know what that says to me? That they can also detect frigging tiny microorganisms too.

But water on Mars, isn’t the only interesting thing up there, and this wouldn’t be a weekly wonder without some kind of controversial topic… So… It is said, that there is a face on Mars. The face is a monstrous 3 km rock, first discovered in 1976 by the viking spacecraft and has divided the scientific community for decades, people either believe one of two things:

1. It is a trick of the light and caused by wind erosion

2. It was created by an ancient intelligent civilisation.

The 2001 photo is said to be more accurate because of increased technology and satellite capability.

I have seen other satellite photos claiming that the face has eyeballs, and some satellite photos which show teeth carved into the sculpture too. The interesting thing is, that despite photos being taken weeks apart, and from opposing angles and in different lighting conditions, the images still seem to show the same thing. A symmetrical object – it looks like a face from either side. All except the newly (2001) published photos, odd, given they have two decades of photos showing roughly the same thing.

The thing is even in the newer photos, there are perpendicular lines, and semi circles in it. ERM…. natural erosion does not produce straight lines, perpendicular ones or semi circles that form a perimeter round objects for that matter. Sure maybe one or two of those things might happen in some types of erosion – I am sure someone will be able to find an example of it just to be argumentative. But all of them? What are the odds?

On the face of probability, if the face was an isolated object, it’s just about believable that erosion could have done the one in a million thing and produced a face. But wait one…This ‘face’ isn’t an isolated occurrence in the region it’s located on Mars. It is near several other ‘odd’ objects. A pyramid for one, and  secondly, what people are claiming is remnants of a city. All these objects have straight edges and non-natural shapes too including other smaller pyramids. I think if the ‘face’ was isolated it may be more convincing that it was a natural freak occurrence, but given that it is near dozens of other objects that appear to be ‘man made’ it makes the ‘erosion’ theory a little harder to swallow.

Not sure which camp I sit in, I would be happy to accept either, if only there was some serious, validated and convincing proof one way or another.

What do you think?

Weekly wonders are meant to inspire my writing, this has given me an explosion of ideas, you could do anything from: Sci-Fi, inspired Mars stories? Maybe humans have run out of space and migrate to Mars, maybe the airs run out, or perhaps we were invaded by an alien race, or maybe someone discovered we actually came from Mars and we decide to migrate back. I hope this has given you some inspiration.