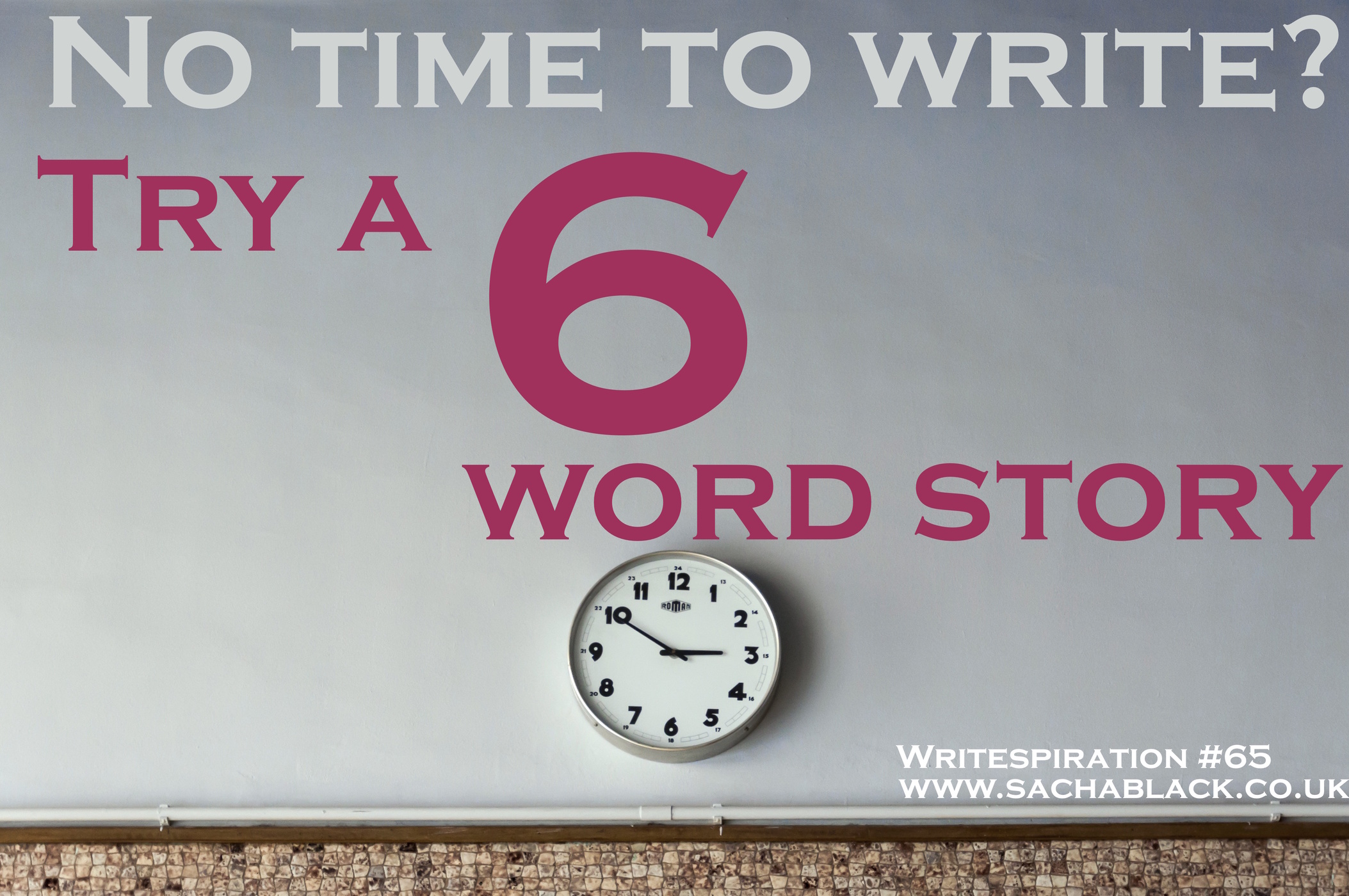 I’ve done this challenge before, but hey, it is NaNo month, and I know most of you will be focusing on bashing out novels. So I thought I would do the quickest challenge there is this week.

As I said before one of my favourite writing procrastinations is the Six Word Memoir website. It does what it says on the tin and asks you to write a memoir or story in six words. So I challenge you to do the same, right here, right now, and I will post it with next weeks Writespiration. While your at it, why not post on their website too?

Interestingly my mum participated this week, here’s her first ever entry:

There is no justice in love, a moment to gasp the sweet air as he brushes past making the hairs on my arms stand up, a small spark jumped across and tingled my soft flesh. Cupids arrow struck, however futile as the ring he wears on his hand proof his heart belongs to another.

Next up, my friend Donna who participated on Facebook and produced this heart breaking story

I’ve learnt that heaven is standing at the front of a church, with the smart dressed man you love bathed in the stained-glass window light. Although it would be better if I weren’t the maid of honour.

Edwina next with a twist at the end to make you laugh out loud.

Rod held his breath as he concentrated on the task, trying not to inhale the pungent odour that was emanating right in front of his nose.
Finally, he stood up, wobbling slightly. looked at his pregnant wife, and smiling with satisfaction announced, ” I’ve made quite a good job of your toenails, darling.”

“The house is a mess, the kids are driving me crazy, I haven’t even showered today…” she scrubbed at the dinner dishes.

“The house will get cleaned up and be a mess again, the kids drive me crazy, too, and I’m only here part of the day, and you…” he gazed at her, “you look absolutely beautiful, as always,” he kissed her cheek then grabbed the sponge and took over washing.

Next up my wonderful rough riding comrade Charli, who produces so much rich imagery in two tiny sentences it floors me.

Her apron prevented grease splatters from staining her calico dress of pink spring roses, but she hardly paid any attention to the sizzling bacon while she watched Hank make his way up the grub line, wearing those thick denims of deep indigo over his muscled thighs and that red and black buffalo plaid flannel.

Oh, how she desired to wear his clothes, his boots, his wool cap!

Ali has produced another heart wrenching piece, stunning in its emotive impact.

Their mothers had laboured side by side to bring them into the world, and as the years passed, their light childhood spats and laughter matured into something deeper, compulsive, unwholesome.

She blossomed, a bright butterfly dancing in gossamer sunlight, tugging him sullen and reclusive in her wake, unaware how his journey took a darker turn until his pain became impossible to ignore, when to her credit, she didn’t falter; steadily, she gripped his hand, and they jumped together.

Debbie my wonderful writing friend has participated for the first time and what a romantic story she’s written:

Slumped over in her chair, she rubbed her eyes in utter exhaustion; wondering if everything she had done for him was even worth it.
He crept up behind her, massaged her shoulders for a moment, tilted her head up so her eyes met his, and cupped his hands around her face, then kissed her tenderly.
Elation.

Dr. R this week has a wonderful story with a cliff hanger ending

It was time, the hour and minute hands both positioned where they should be to signify that the time had indeed come so then, they gazed into each other’s eyes, looking deep inside each other to the point where it felt like they were looking at one another’s souls with their heartbeats perfectly synchronised, beating as one; he held her hands, a single tear running down his face, to him, she was his weakness, his Achilles heal, his Kryptonite, she broke down the walls blocking his feelings & set them free, that tear he cried was the proudest tear he’d ever shed. At the same time, she clenched tightly as his hands and her hands were wrapped together as one, to her, he was her strength, her shining light in the darkness, her rock, he empowered her to stop her from feeling weak & with all her might, she firmly grasped his hands with a desire to truly bond in unison, a mutual irresistibility existed between them, a bond that at the right moment would become unbreakable and as they both turned to look at the clock, they knew that that time had come.

Hugh, tricked me this week, I expected the worst he gave me the best! Gorgeous story end.

“I’ve loved you for the last 60 years and not only can I prove it to you, but nothing or nobody can now stop us.” Paul got down on one knee. “Will you marry me?”

Three months later they were at last married and nothing or nobody was able to stop them, not even the law. Paul and Michael lived happily after after.