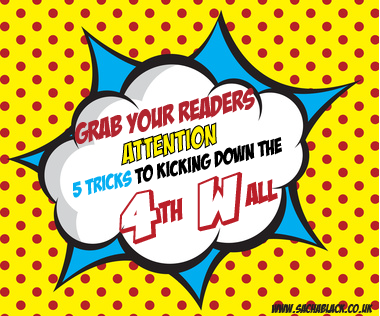 Instead, I discovered it was one of those literary techniques I knew, but didn’t know I knew.

Have I lost you yet? I have, haven’t I? You’re thinking Sacha’s pulled one too many all nighters, lost her shit and fallen into a caffeine induced hallucinatory coma.

Okay, let me start again… I had one of those, mythical childless evenings the other day. So the wife and I hot footed it to the movies before my mother came to her senses and promptly brought the terror tot back. We watched Deadpool, the latest Marvel comic hero movie and in my usual style, I dissected it in order to bring you some kick ass (did you see what I did there?) lessons.

Imagine you are at the theatre, sat in velvet red seats shovelling over priced wine gums in your gob. The lights go down and you hear the first shriek from a glass shattering soprano. You expect to be entertained. Not interacted with. This isn’t a ‘he’s behind you’ Panto or an interview. This is theatre, or the movies.

The point is, they’re on stage, you’re not. There’s a barrier between you and the actors. Whether that’s a movie screen, the invisible line between the stage and the neck breaking front row, or the page between the reader and the character. It’s there, and it has a name.

But, breaking that wall, is a whole can of literary device awesomeness in itself. But what do I mean breaking the 4th wall?

Breaking the 4th wall means the character acknowledges that’s what they are and they speak directly to the audience.

Ever seen: House of Cards, Ferris Bueller’s Day Off, American Psycho, Lord of War or what about my two faves: Spaceballs and Fight Club. Each one of those films breaks the 4th wall and has a character speak directly to the audience.

And because I like examples, here’s a 1 minute clip from Fight Club. Note – Explicit references and content.

The fourth wall separates the reader or viewer. The wall allows us to view the world through the eyes of the protagonist. In effect, we become the protagonist, seeing the story enfold through their eyes, opinions and emotions. When that fourth wall gets broken, we can no longer embody the characters in the same way. They become entities in their own right.

Breaking the 4th wall is often confused with a soliloquy, but don’t because it is not the same thing. Soliloquies are when characters speak to themselves like in Hamlet or Macbeth.

Well, it is an unusual literary device that’s rarely used for one, which means it helps give your story a unique selling point. It’s often used for humour or satirical purposes. But it also makes readers feel engaged with what they are viewing on another level – we are no longer passively viewing we are actively engaged with what’s in front of us.

As a note on Deadpool the film, it’s rated 15, personally, I felt it ought to be an 18. There was an excess of graphic violence at the beginning, scenes of a sexual nature and a serious amount of bad language! None of that stopped me loving it though.

Here are 5 tips I took from watching Deadpool’s use of breaking the 4th wall.

Deadpool was hilarious. Not only because of the ridiculous insults, comebacks and prolific use of swear words. But because it used a plethora of satirical humour, sarcasm and dry comedic timing. They would stop fight scenes to add in witty narration, for example in the 50 second clip below (bare in mind all the warnings I have given about content)

TWO – Use It When You Least Expect It

Like in the clip above, the writers would break the 4th wall when you least expect it, like in the middle of a fight scene. This keeps the use of it fresh and the viewer engaged. Same can be said for Fight Club. It’s such a serious intense film, you don’t expect to be spoken to as a viewer, therefore when the narrator/Tyler Durden talks to us it’s a surprise.

THREE – Use It Sparingly

Just because you decide to break the 4th wall, doesn’t mean you then need to do it all the time. In fact, I’d recommend you don’t; use it sparingly. Breaking the 4th wall jars the viewer. It’s a shock tactic. So if you use it too often the shock and awe impact decreases each time, making it a less effective tool.

Ultimately, breaking the 4th wall is a narrative technique. So if you break it, you need to ensure it’s for a reason. Comedy is great, but it should serve a purpose deeper than just comedy. For example, giving viewers insight to the protagonists mindset or character. This deepens the relationship with the viewer and also gives depth to the character, and all that can be achieved even if you are using humour.

FIVE – Find The Balance Between Subtlety & In Your Face

Whilst breaking the 4th wall is great, it is also a difficult technique to use. You have to find the balance: Not funny enough and you’ll fall flat on your face, use it too often and you jar the reader so much they no longer enjoy reading. Using this technique you remind the reader they are in fact participating in the act of reading, rather than just being embroiled in the pleasure of it.

There are other subtle benefits though, like the ability to let the readers know something other characters (other than the protagonist) don’t know.

If you’re interested in literary books that break the 4th wall. One of the best most insane books I have heard of and is on my TBR pile is House Of Leaves

, everyone I know that’s read it says they feel a little less sane at the end! 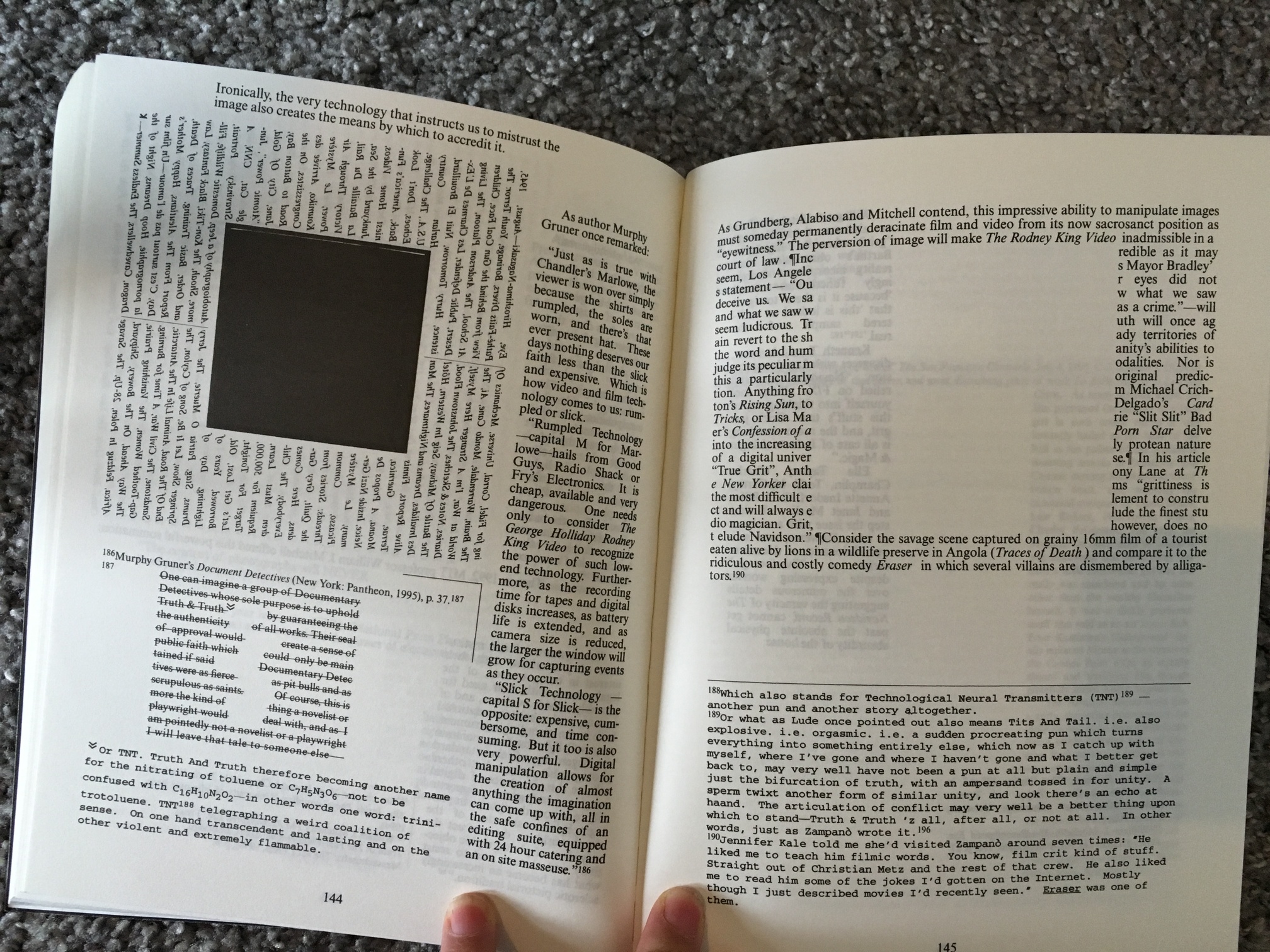 Can you blame them when it looks like this on the inside?!

Other books include: Don Quixote

, The Gunslinger (The Dark Tower Book 1)

by Stephen King and Storm Front: The Dresden Files Book 1

Have you heard of the 4th wall? What do you think of it as a literary or film technique? Do you like it when it’s used? Let me know in the comments below.