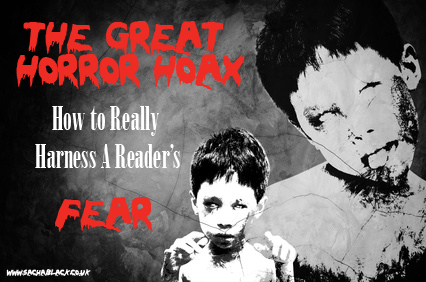 I’m terrified of spiders. I know. So cliched. If it helps, I am also terrified of boats – although the reasoning behind that is a little foggier given I swim like a fish – I must have drowned in a past life.

I had a date night recently and we happened to watch a film: London has Fallen. It gave me somewhat of an epiphany watching it. Horror in its most basic ‘blood and gore’ sense, is changing.

As a kid, I thought sword fights and giant spiders were terrifying. Granted kids find a lot of things scary but it wasn’t that long ago that adults cowered behind the sofa over the Blob, which barely caused me to raise an eyebrow recently, and only because it was that bad!

So why then, did I find this cheesy American action film only rated 15, so horrifying?

It’s because, horror, like society, is evolving. It’s thrown off its red paint blood shackles and picked up terrorism and child napping instead. We can learn a few lessons from it that can be woven into ANY type of genre.

The films plot in essence was: eye for an eye. America hit somewhere in some middle east country for some inane reason I forgot. A middle eastern guy wanted revenge cause the hit killed his daughter and maimed his family. To do it he (and his remaining family) orchestrated the murdered of the Prime Minster to get a state funeral. Then blew shit up in London whilst the American president was at the funeral. Apparently killing the British PM is easy, but the President is impossible…?!

Pretty trite for an action plot if you ask me. The only interesting thing was that it was based in London, (not something I’d seen before).

It was more than somewhat unnerving watching iconic British buildings get blown up. If there’s one thing the British are, its proud of their heritage and I can’t think of a recent film that’s blown anything other than the White House up. What I wonder is how American’s feel watching their iconic buildings get blown up? Are you too saturated by similar movies to be unnerved anymore or does it still have that shock and awe impact?

Fear isn’t just fear anymore, someone decided to re-write the manual and create psychological fear instead. It’s different, its more, its worse than normal fear. It makes the things that go bump in night look like fluffy teddy bears sprinkled in love hearts.

‘Psychology’, whether fear related or thrilled up, seems to be the new publishing black. Since Gone Girl

went nuts, psychological thrillers are all the rage. Now it’s all The Girl on the Train

and Before I Go To Sleep

Horror has traditionally been about taking violence and gore to the extreme. For example, graphic descriptions like this one from James Howell‘s Guinea Pigs book which I read recently (post live 25th April 16).

“One of the hyenas clamped its mouth over her face and tore out an eyeball. The other animal chewed off her nose and lips. Her leg throbbed, the femoral artery ruptured and her life squirted away in thick red jets.” James Howell, Guinea Pigs, buy it here.

BUT, what makes this sphincter tightening psychological horror, is the context surrounding it. The woman being eaten was not only alive and awake, but had been purposefully paralysed (we also knew that was one of her worst fears) and had to watch herself be eaten alive by the hyenas. Read it again knowing she’s awake and watching her flesh get masticated and tell me it isn’t just that bit more gruesome and horrifying!

But what is it about the fact she was awake whilst having her flesh eaten that made it so psychologically terrifying?

If you think about it, numbers 1 through 3 are states of mind – emotional constructs, and things that we can therefore ‘feel’. They’ve not actually got anything to do with traditional ‘horror’ as we think of it.

It’s only that the gore gives it its horror context.

Psychological horror is about the emotional state the reader is in, the gore you make them see as per the genre is almost irrelevant.

Here’s another example from another book I am reading currently (yes I read several at once, shoot me.)

“He was standing on the back of a charred sofa bed, swaying a little unsteadily on his short legs, with a makeshift nappy bunched up to one side and sagging to his knees.

“Mattieu!” Jérémy screamed again and scrambled frantically toward the child, one arm outstretched to grab him. A war whoop came from below, followed by the rattle of automatic fire and the screech of bullets ripping along the top of the flimsy barrier. Then came the duller thud that sent Mattieu spinning, spraying blood in a wide arc. Jeremy, still reaching up, caught the next three bullets and the brothers fell together, limp and strangely tumbled, in a light rain of chipboard and pine.” Jane Dougherty, Abomination buy it here.

This is perhaps only horrifying to anyone that’s a parent. But I actually had to pop the book down momentarily. Dead kids is hard and horrifying, at least to me anyway. But especially in the context of the book, where basically the whole world is coming to an end!

But what of the film, and how is this relevant to other genres? London has Fallen is psychologically horrifying because its was SO real, and so possible. Being that close to the truth in a society whose major broadcasts are fuelled by terrorism made me feel vulnerable. Sure, I know it was just a film, I know I’m perfectly safe in London, but it still sowed a seed of doubt. I could open my whole conspiracy can of worms now and talk about New World Order and how the film industry is brainwashing society to accept whats to come, but I won’t…or maybe I just did.

How does this apply to other genres?

Horror, fear, and terror aren’t reserved only for lovers of the night fan club. Characters in my fantasy novel need to be scared, REALLY scared, characters in romances need to be scared of losing their loves etc etc what better way to make it realistic than through psychological horror.

Making characters vulnerable and helpless/hopelessness, as well as playing on their fears and finally sprinkling with a little context fits in any genre, in any story.

Thoughts? Do you think horror is changing? How do you harness a readers fear? What are you afraid of?