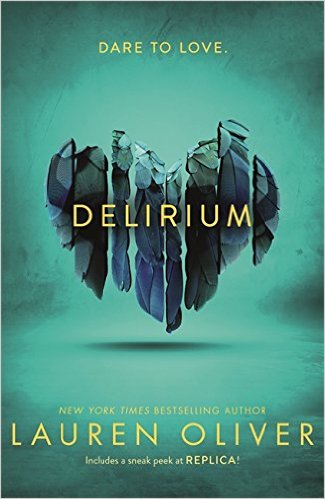 When I finished my novel and handed it over to beta readers. I knew there was still  a fucking legion of stuff I needed to work on. Including the need to develop some skills that much to my annoyance STILL weren’t honed properly. Like my powers of description. Give me non-fiction or blog posts and I can whip out my bad word baps, and filth-filled metaphors with the best of them. But put a fuckitbucket in a YA book and you’re going to regret it. So I started bingeing on popular YA books hoping I’d absorb some of their skills.

Right now, I’m reading Delirium by Lauren Oliver. Her description is borderline excessive (in my humblest crumbliest opinion), but I quickly dropped into the rhythm of her sentences and now I kinda think it’s beautiful. So I thought I’d spend this post deconstructing her sentences to see what I could learn about description.

All quotes  are from Delirium by Lauren Oliver, chapters and page numbers noted after quotes.

“…like all the government offices, are lumped together along the wharves: a string of bright white buildings, glistening like teeth over the slurping mouth of the ocean.” Ch3P1.2

Direct comparison is like the oldest of old school writing tactics. It’s like the bearded wizard. It’s Dumbledore in a sentence. Want to describe something without stating the obvious, then compare it to something else.

“As soon as I look up, his eyes click onto my face. The breath whooshes out of my body and everything freezes for a second as thought I’m looking at him through my camera lens, zoomed in all the way, the world pausing for that tiny span of time between the opening and closing of the shutter.” Ch4. P.34

I mean the thing is, I knew this was the show stopping love interest just from the description, and that’s kind of the point is it not? To tell the reader something the character doesn’t know. How did she do it? Well, the sensations Lena feels for one – the air whooshing, time stopping.

But frankly I think the camera lens is a fucking genius metaphor. It drills straight into our subconscious. Lena is in the middle of chaos, and yet has a moment of pause where she focuses on this boy. The metaphor description of that pause is not only describing the moment but it’s also an instruction to the reader… YOU THERE, READERLY PERSON…FOCUS ON THIS BOY CHARACTER, HE’S IMPORTANT, #thatisall. She tells us to ‘zoom in’ her words, G.E.N.I.U.S.

Excuse me while I have a moment myself and bow at Oliver’s feet worshipping her in an outrageous display of teenage fangirlage.

“‘I’ve never heard that name before.’ I hesitate. Shaking hands makes me feel awkward, like I’m playing dress-up in an adult’s too-big clothing. Besides, I’ve never actually touched skin-to-skin with a stranger. But he’s just standing there with his hand out, so after a second I reach out and shake. The moment we touch, a tiny electrical shock buzzes through me, and I pull away quickly.” Ch.5 P.55

Here for me, it’s less about the electric shock – everyone gets those, it’s like your standard fish and chip Friday for a Brit. Standard description for touching someone you fancy. No, for me, it’s about the description of her emotive state – awkward. I love that comparison of a kid in parents clothes. The vulnerability of it, the desire to be more grown up than you are. Those feelings are what lead her to shaking and electric shocks – so she sets up the physical with a clever little metaphor.

“As we come up to the top of the hill – all three of us panting a little from the climb – the bay unfolds to our right like a gigantic map, a sparkling, shimmering world of blues and greens. Hana gasps a little. It really is a beautiful view unobstructed and perfect. The sky is full of pouty white clouds that make me think of feather pillows, and seagulls turn lazy arcs over the water, patters of birds forming and dissolving in the sky.” Ch5. P.61

In this little paragraph she nails a scenic description, capturing sight, sound and in a sense touch too. Adding more than one sense into description, is like pouring reader-fuel onto your descriptions. It explodes them into a firework of readerly delights and means you show instead of tell and everyone knows that’s the holy grail of writing.

Oliver gives a direct comparison of the bay to a map and then draws in colours to enhance the image in our minds.

She captures sound description by using words like ‘gasp’ and ‘patters’, words that make sounds!

“I watch the girls circulating in their orange gowns like flames. Everything seems to zoom back, recede away at once. All the voices intermingle and become indistinguishable from one another – like the constant white noise of the ocean running underneath the rhythm of the Portland streets, so constant you hardly notice it. Everything looks stark and vivid and frozen, as though drawn precisely and outlined in ink – parent’s smiles frozen, camera flashes blinding, mouths open and white teeth glistening, dark glossy hair and deep-blue sky and unrelenting light, everyone drowning in light – everything so clear an perfect I’m sure it must already be a memory, or a dream.” Ch.7 P.87

This paragraph in itself felt a smidge much for me, but it was basically the only description of the graduation so in that sense for such a momentous occasion it didn’t go overboard at all.

This description mimics the technique she used in number two. She uses the overarching concept of a camera snapshot (something that takes a moment in life and stores it) to pause the scene and give the protagonist, Lena, a chance to reflect and soak up the event.

She also uses a formula for her descriptions, (see the blue sentence in the quote above) triple adjectives followed by a metaphor or simile, I’m not suggesting we all do this. In fact, it bucks the trend for a lot of YA authors who err on the side of clean fiction. Whereas this is more like an ice cream Sunday on steroids, just saying!

“All of a sudden it hits me: she reminds me of the animals we saw once on a class trip to the slaughterhouse. All the cows were lined up, packed in their stalls, staring at us mutely as we walked by, with that same look in their eyes, fear and resignation and something else. Desperation. I’m really scared, then, truly terrified for her.” Ch.8 P.97

Oliver uses a memory comparison here to describe another character. Neat. But what I like most about this is why she does it. It’s not because she’s describing the physical appearance of the character to a cow. No. She’s describing the emotional state, and that’s sooooooo much more powerful. Especially given the comparison – fear, resignation and desperation, a dangerous cocktail.

The point isn’t really about using memories as comparative descriptors – although that is a handy little trick for your writer bag. It’s that describing the emotional state of another character, and the subsequent impact has more of an impact than describing their clothes. (although you do need to do that at some point too!)

“But were not safe yet – far from it. The darkness is mobile, twisting, alive with paths of light. Flashlights cut through the woods to our right and left, and in their glare I see fleeing figures, lit up like ghosts, frozen for a moment in the beams. The screams continue, some only  few feet away, some sodistana and forlorn you could mistake them for something else, for owls, maybe, boosting peacefully in their trees.” Ch.14 P.197

I love this because it uses the comparison (ghosts this time) to create the atmosphere. Up to this point you know they’re running through woods. But the image of fleeing, screaming ghostlike teens gives the atmosphere  a sharper sense of fear. The technique she’s using is to draw on a concept we (society) already think of as scary, ghosts, and then attach it to a scary scene.

“They say that the cure for love will make me happy and safe forever. And I’ve always believed them. Until now.

There was a time when love was the most important thing in the world. People would go to the end of the earth to find it. They would tell lies for it. Even kill for it.

But now love has been declared a dangerous disease.

Everyone who turns eighteen must be immunised with a procedure called the Cure. Lena Haloway is looking forward to being able to live the safe, predictable life the government claims the cure will bring. But meeting Alex, an enigmatic boy from the Wilds, might just make her question everything she’s been raised to believe.”