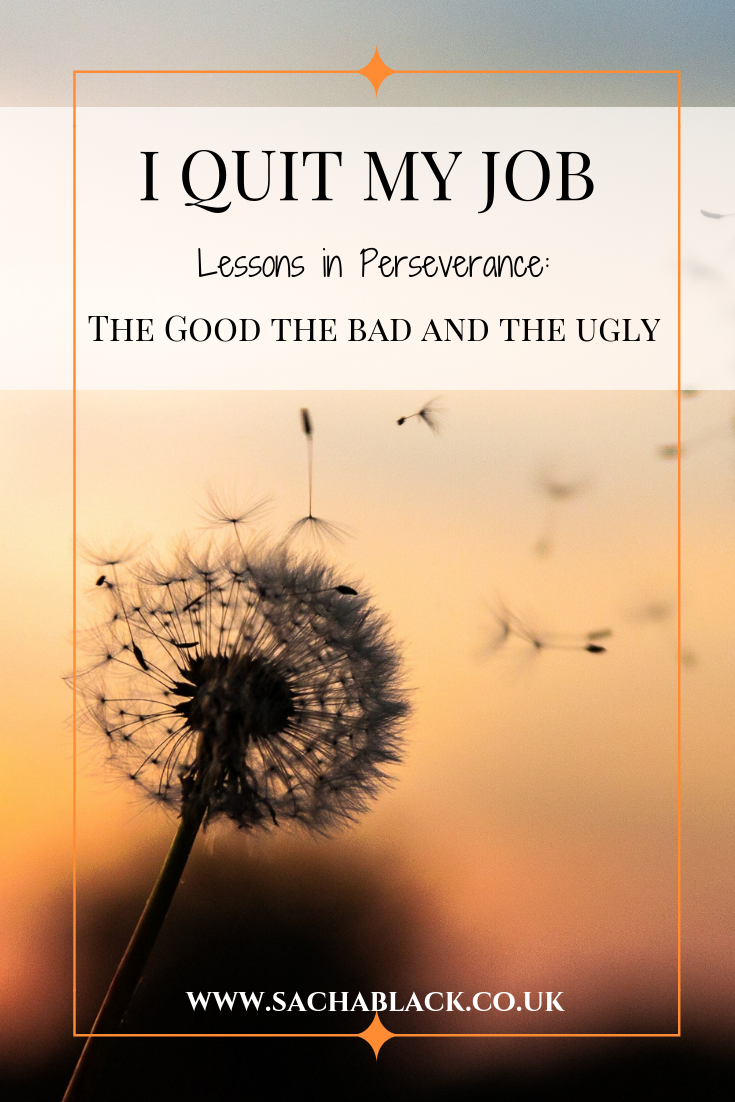 I’m pretty sure my mum had heart failure. My wife definitely swallowed her tongue while trying to blink her way through the wide-eyed horror. Even my dad – who’d spent the last eighteen months telling me to quit – had a momentary aneurysm at the news.

But on March 5th 2019, I found myself sat at a canteen table, both my managers staring back at me. One of them knew. Maybe it was written in the glint in my eye or the tremor in my hands. Perhaps it’s just that somethings are inevitable. Somethings you can taste like the cut of thunder in the air before it arrives.

I didn’t even open my mouth.

Ironic really, that as a writer I’m struggling to capture the emotion I felt in what has to be one of the most momentous points of my life. I’ve worked in local government for eight years. Eight very long years. It’s not that there’s anything wrong with my organisation, more that I personally wasn’t suited to working in a conservative organisation with more than its fair share of bureaucracy. But hey, it taught me things too. Lots.Of.Things…

Things I Did Learn!

The Universe Listens, Be careful What You Say

Sat at the canteen table, eight years of emotions swirled in my chest. I’d wanted to leave more or less from the moment I arrived which was:

I’d spent the entire of 2018 saying 2019 was going to be my year. Without being too philosophical about this, I honestly think the universe listens. If you say something enough – and you’re willing to put the sweaty, frequent tear-gushing, sleepless nights into it – then you will manifest it. Think of it as a self-fulfilling prophecy if you like. Granted when saying it I had no idea 2019 would actually lead me to quit my job. I’d assumed I’d cut hours down and be financially better off. Not once did I think I’d leave. And yet,

I should have listened to my friend back in November. When booking a writing retreat to Dubrovnik for June 2019, she said she had a feeling I’d be writing full-time. I laughed in her face, literally. Had she lost her fucking mind? At that point in November, there was no possible way I could write full time. Yet, just three months later, I was sliding that piece of paper across the table. It’s eye-wateringly shocking to me that I can shift my life that fast and that extensively in such a short period of time. November I was staring down an eternal barrel of doom, depression and demoralising slavery. And then, just as suddenly, I wasn’t.

I still can’t get my head around it. As I write this, I’m sitting in my office – something else I didn’t think I’d have having spent the last five years on the diningroom table – sipping a coffee, the patter of rain splattering the cobbles outside. I still can’t believe I’m here. I don’t know how to adequately convey the inexplicable swell of joy my chest.

Looking back it all seems so close and yet ethereally far away at the same time. Memories are funny like that. So tangible in a wholly transulcent way. Capturing the wrenching pain of the last eight years seems fruitless. But I’m going to try if for no other reason than to encourage someone reading this to take the first step in their journey. Life is too short to be in pain.

I used to wake up every day knowing I had to spend the majority of my day doing something that made my skin crawl and my heart bleed.

Every day, every email, my chest ached writing anything corporate instead of fantastical. Such a simple task – penning an email, yet it caused me a kind of physical hurt. A searing pain that made me want to scream and cry. I wasn’t doing what my soul wanted nor what my purpose for being alive was.

Out of Body Pain

I’m not being dramatic when I say that some days were like out of body experiences. I could feel myself climb out of my body and sit on the floor beside my office chair. I have these strange memories of metaphysical me on the floor clasping her hands around her knees and rocking, quietly moaning and sobbing and clawing at her face. There were weeks (yes, plural), where I cried every day. Be it in a toilet, or a tree, or a corridor. I wept because I hurt. Because I was frustrated and because there was a thing so beautiful and so pure beating inside me but it was trapped in a cage with bureaucracy and monotonous paper pushing bars.

Each day I tortured myself with continuous clock watching. I counted down the hours and minutes until I could walk out the doors and yet with every tick I knew I’d have to come back the next day. That was the worst bit, knowing there was no way out, no light at the end of the tunnel.

Even now, sat at my desk with freedom in my heart, there’s a pull. A gnawing fear in my gut that someone is going to turn around and say, “Only joking silly girl, off you go back to work.” I know that cold slick of fear when I go to sleep at night will take a while to disappear. I’m okay with that. I’ll use it, turn the fear into motivation and drive to create more, earn more, do more. There’s no way I’m going back to employment, not until my cold, dead body is ash and rot.

It helps you keep going. Gives you the fuel and drive to keep pushing and fighting for the thing you desire. And all the 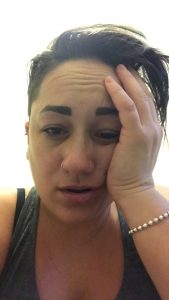 while it reminds you that you don’t have the thing you want. Like the carrot on the end of the proverbial stick, hope is unreachable because, of course, once you get the thing you want, you no longer need hope. And in the meantime, while it’s driving you forward, the slippery bastard is also pushing you down and cheese grating reminders of what you want all over your consciousness.

This is a horrific photo of myself. And you might wonder why on earth I’d share it. Well, I’m sharing it because it’s the ugly truth and sometimes the truth is needed.

I took this photo the day before my son’s 4th birthday. November 29th, 2017. It was my lowest point, it’s not a pretty selfie, it’s not even pleasant to look at. Everytime I look at it it sends a shiver of fear-laced pain down my spine. I never want to go back there. I never want to be her again.

It was a wake up call. When I looked at the photo I was shocked at the amount of pain etched into my skin, I didn’t even recognize the girl in the photo. So I kept it as a reminder – I had to get out. I had to keep fighting because otherwise, it was going to kill me.

Want to know what it looks like when you choose not to follow your dream? This is it. Take it from me, you have to do what your soul craves. You have to pursue it until you get it. Because the alternative is  mental prison… This is what a cage does to a person.

Completely and utterly cored out until all that was left was a battered shell, empty eyes and an aching heart.

I could have quit. Believe me. Right there in that moment I wobbled. I wondered if it was all worth it. If the pain of wanting something so much and not being able to reach it was worth the anguish, the hurt and the grind. But what other choice did I have? Quit? Then what? Continue in a life I hated. There was no choice because I couldn’t quit. If I quit, I lost. And even in that broken state, I wasn’t about to be beaten.

So I carried on. This is my message to you.

I returned to my laptop night after night. Weary, exhausted and with no light at the end of the tunnel, and I kept writing anyway. I created affirmations and goals, I studied the craft relentlessly, listened to podcasts. Sacrificed more things in order to make more time. I trimmed down what I was doing until I was left with only the tasks and projects I knew would help me leave work. If you’re interested, I’ll write more about my strategy in later posts.

I’d love to tell you that an offer suddenly came through or my books became a roaring success over night. But that shit is for Cinderella and fairytales.

It was 17 months after that photo before I was in a position to quit.

S.E.V.E.N.T.E.E.N. MONTHS of clawing my way out of a hole. Of gritting my teeth and pushing on anyway. But I made it.

And that’s why If you’re sitting here reading this thinking she’s so lucky to be free and working from home. Give yourself a slap and wake up sister. Luck doesn’t exist. I’ll tell you what luck is, luck is working two full time jobs, it’s obsession and unwavering belief you can do something even without a shred of proof that it’s possible. It’s working until midnight so many nights on the trot you’ve forgotten what bedtime is. It’s grit. It’s single-mindedness. It’s getting up when you fall down. Hard fucking work is what luck is made of. And trust me, if I’m capable of leaving my job and following my dream, so are you.

Truly. I believe it. You just need to too.

This might be a dream come true, but it certainly isn't a fairytale. Dreams are two parts gritty-sweat-fuelled hard work and one part time. #Amwriting #IARTG #writingcommunity #indieauthor Click To Tweet

Where are you at in your journey? Is your goal to write full time? Let me know in the comments.

Mantras, Mindset & 7 Secrets You Need To Finish Your Book

Don’t forget to sign up to get your free 17-page cheat sheet to help you create superbad villains, as well as bonus tips and my latest book news by clicking the button below: