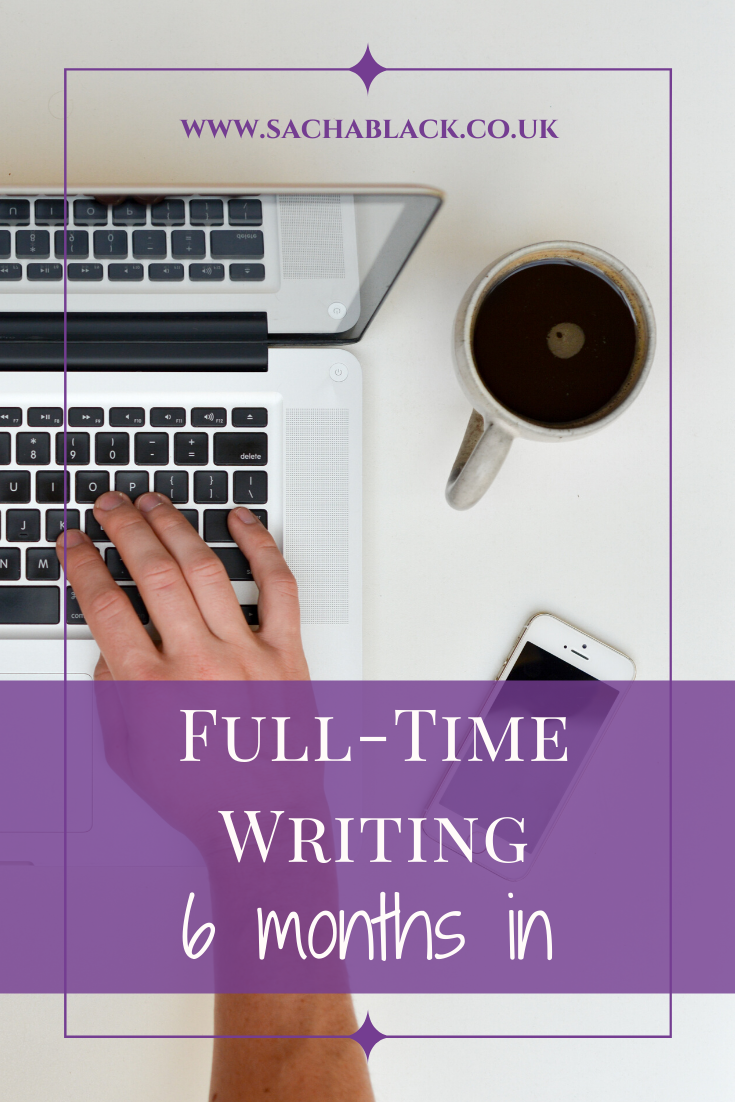 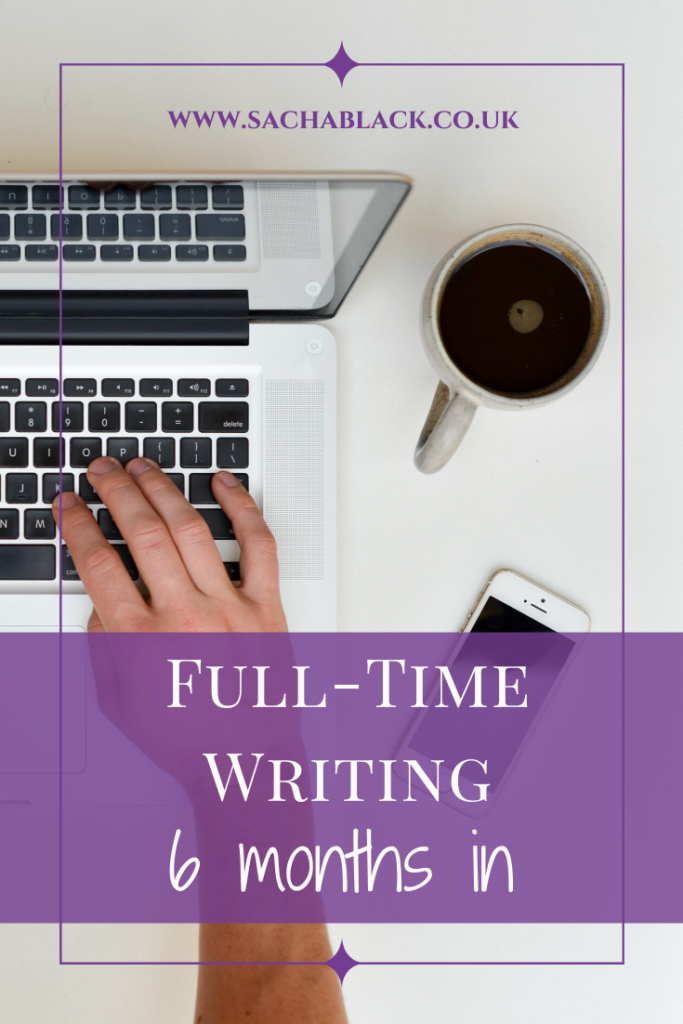 I can’t believe I’m writing a post about being six months full-time writing. The first three months whizzed by but there was this sense of length too. Of time expanding and stretching out in front of me. Not so much for the last three months. It’s been a hop and skip to get to the six month marker. I’m changing and learning so fast it makes me even more grateful I’m taking the time out to chronicle this journey. If you missed the lessons from my first three months, you can find them here.

So six months in to this journey, what have I learned?

I spent eight very long years crippled by fear. Utterly, utterly, crippled. For the last two years in employment, my dad particularly, but some friends too were insistent that if I just quit, I’d find the money I needed to live. I didn’t believe them. And so I didn’t leave. I stayed in pain on a daily basis because I didn’t have faith in myself. Now, some of staying was also about paying off debt and being in a better financial position before I left. But mostly, it was the fear talking.

Interestingly, fear has changed now. There’s a clear line in the sand, the fear before I left and the fear after I left. There’s a book I’ve spoken about on The Rebel Author Podcast, called Playing Big by Tara Mohr, and she opened my eyes to the meaning and shape of fear. She argues there are two types of fear Pachad and Yirah.

Pachad fear is crippling, a crushing, paralysis that feels small and insidious and makes you anxious about bad things happening.

The first type of fear you lean away from, but the second? The second you need to lean into. Good things lie on the other side of that fear.

My fears have changed. Before I left, I was terrified of poverty, of not being able to put food on the table and not being able to provide for my child. Don’t get me wrong, those fears still simmer underneath, just enough to keep the fire lit under my ass. But I’m not afraid in the way I used to be. The fear is much closer to Yirah now. It’s empowering in a way that’s all encompassing. Once you take that first leap of faith you know anything is achievable. I know I HAVE to earn each month so I go out and make it happen.

That said, I still hold one Pachad fear: the fear of having to return to a day job. Though, I’ve heard that this too, disappears over time.

For a while, I thought the only leap of faith I’d have to make was leaving my day job. Oh Sacha. Dear sweet, naïve Sacha… In the words of Ygritte, “You know nothing, Jon Snow.” If one thing is totally clear, it’s that this is a continual lesson. See that fateful leap of faith was huge. In some ways it was probably the biggest leap of faith I’ll ever have to make. The first leap into a giant black hole of mystery in front of me. But there are definitely other leaps of faith cropping up along the way.

I spent six months more or less entirely working on client work and getting none of my own work done. I did that because I was afraid. I quit my job y’all. Shit got real. There was no pay check coming at the end of the month. What if I couldn’t pay my bills? Freelance was fine, it worked for a bit. But what didn’t work was me spending six months not finishing my own projects. I didn’t leave work just to work for other people. But that’s what happened. I got trapped by income and clients. My wife really opened my eyes when she said:

“You’re spiralling. You’re going back to what you hated in the day job. I thought you left so you could be free?”

Well that was a shocker. I thought I left to be free too. But I’d fallen prey, trapped by fear and worry. And so I approached my second leap of faith. Reducing client work so that I have the time I thought I was going to have to work on my own projects. Yes it’s scary, yes it’s worrying, but it’s what I left work to do. I have to lean into this, otherwise what was the point?

So here’s to the next six months, I hope by the time I’m writing my one year post, I’ll be able to tell you I achieved shit loads in the second six months of my first year.

From Decision Fatigue to Big Decisions

It’s interesting because last time I said that decision fatigue was killing me. And to an extent, it still is. But it’s also getting easier. At least the big decisions are like the leap of faith I mentioned earlier. The decision to leap into the unknown and focus on my own work despite the financial consequences is so much easier than the decision to leave my job.

I’ve made several huge decisions since I’ve left and while each one has had major consequences, each decision has been a little easier than the last.

No Matter What Happens, This is Better

I’ve reached a point where I know that no matter what happens, no matter what I have to do to earn money, it is 100% better than anything that came before. Leaving work really solidified what’s important in my mind. When I look back at who I was and how crippled I was, mentally, physically and emotionally, I know nothing can be that bad again. I won’t allow it. I’m trying to practice appreciation and gratitude, even on the hard days.

Meditation and Clarity of Mind

Listen, don’t roll your eyes and tell me only hippies meditate. That’s BS and we both know it. Whenever I read books written by entrepreneurs and successful people, one of the common themes that runs though them is clarity of mind and guess what? All of them meditate. As I write this I’ve celebrated my one month anniversary of having meditated consecutively for 30 days. I was sceptical at first, but I committed to doing it for a month to see what happened.

Boy did I have my mind utterly blown. After about 10-14 days I saw a calming of my brain. A quietness that hadn’t been there before. I was also able to get to sleep easier. I’ve been a lifelong sufferer of busy brain and swirling thoughts before sleep and all of a sudden I was able to pass out in minutes instead of hours.

I also saw my ability to problem solve radically increase. I was solving plot issues that had plague me for 18months. I was also more reflective, noticing patterns and issues and able to think on them in a way I’ve never done before. I’ve been able to fix a lot of productivity issues I had too by being able to spot what was wrong and find solutions.

I’m not saying meditation is for everyone, but sweet fucking Jesus, MEDITATION IS FOR EVERYONE.

If you’ve tried and given up, I implore you to try again. Commit to it for a month. I only meditate 10 minutes a day and I can honestly say it’s changed my life. You can spare 10 minutes. You need to spare ten minutes.

Sleep, I’m discovering, has the biggest impact on my life. I think part of me knew this deep down, but it’s becoming ever more salient. With no disrespect to my old job, I’m using my brain in a much more intensive way now. Everything falls on my shoulders, I make both the creative and the business decisions and it doesn’t seem to matter what bits of work I do in the day, by the time the evening is over I am absolutely ruined. I was never ruined in my day job. Not once. Okay maybe in the first week, but you know.

If I have a bad nights sleep, it’s poisonous. It infects my day like a virus and plagues me until I get to crawl into my scratcher at bed time. It’s harder to focus, harder to make decisions, harder to write words. When in the day job I’d sacrifice sleep for words every day of the week. There was a long period where I was getting 4-6 hours sleep just because I couldn’t go to work the next day unless I’d achieved something word-wise. I don’t advocate this by the way. It’s a ridiculous mindset and only leads to burn out. But the point is, I survived in a zombied state because words were more important to me than sleep. While words are still that important to me, I’m finding that it’s less and less productive to lose sleep. Ultimately I end up not able to work as effectively or efficiently if I don’t get a decent nights sleep.

Good sleep is everything now. It makes me a better writer and decision maker. It also happens to make me a better, less grumpy human.

Find What’s Uniquely-You and Run With It

This whole working for myself shebang seems to be running parallel to another journey of self-discovery. Of learning who I really am and what that means to me and what I leave in the world. I read an awesome blog by Orna Ross, the Alliance of Independent Author’s (ALLi) Director the other day. If you don’t know what ALLi is then you can go check them out here.

The blog I read is here.

This blog captured a lot of what I’m trying to process. I’m on a journey of discovery, of understanding who I am now that I’m free of the shackles of employment. I think I underestimated quite how shackled I’d been mentally. I’m not saying everyone in employment is shackled, just that I was. I feel free in so many ways that I never did. I can stretch my wings, and muscles and learn to fly. And in doing so, I’m getting to discovering what’s important to me, what I want to work on and where I want to focus my time.

Like with all assumptions, I thought I wanted to focus in certain places and actually, that’s not the case at akk. It’s a process of learning and relearning and discovering what’s under my skin.

In the blog, Orna talks about finding what’s uniquely-you. Her point is about marketing and finding success as an author, but it’s so much more than that. This creative journey is about self-discovery. Each new work we complete is another piece of us, another part of who we are, another expression of ourselves. And I feel very privileged to be able to follow my heart’s whims.

I’m discovering new things that are important to me, things I didn’t think I’d ever want to write about or talk about but that I’m so deeply passionate about I feel compelled to. It’s both empowering and overwhelming.

But under my heart’s whims is a thread connecting it all. And that’s the part Orna’s blog focused on. What is it inside of each of us that is uniquely-us. What silken thread makes our voice unique? What insight or angle or theme permeates our work.

It reminds me of those memes online.

What is your weird? Because once you know what your weird is, you can find people who match your weird. You find your tribe. I guess that’s what I’m doing.