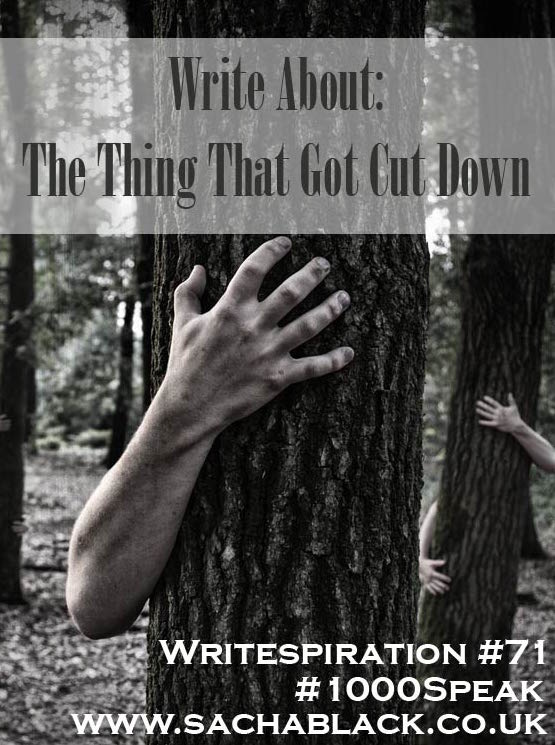 This week, this post is both a challenge and part of the upcoming #1000speak day on the 20th December. #1000speak, if you haven’t heard of it is a movement trying to get 1000 people to write about compassion or related topics on one day (20th) and each month the theme is different, with compassion repeating every few months. I’ve missed a few months so thought it was time I joined in again.

To the writespiration: The challenge this week is to write about something being cut down. Maybe it’s a person being cut down in their prime, or perhaps something more physical.

The reason I chose it this week is because…(and this ‘half-story’ counts as my entry!):

I was walking my son into town the other day and there were some tree surgeons milling around our area. One was half way up, helmet and ear defenders on with his legs wrapped firmly round the tree. He let the chainsaw rip and cut a branch down in front of me.

It was weird. I had an urge to cover my sons eyes, like it was something bad or sordid. But I have no idea why. It was just a tree being cut down, yet, it felt so wrong. I’m not a tree hugger or anything but, I do like trees. This one in particular was huge, and stunning. Maybe that was why. I ushered us away and we walked into town to complete our errands.

On the way back the tree surgeons were still there. Except now the tarmac was littered with chopped logs. Each one looked like a severed limb. The tree didn’t bleed red like you or I would. Instead it scattered a blanket of shavings that looked like brown snow. It made me queasy. Thankfully my son had fallen asleep. But they were cutting the main trunk. The methodical grinding of the chainsaw ripped through my ears as it sliced further and further through the trunk.

A hand signal went up – a truck moved forward. A crack echoed round the car park as the last bit of wood connecting trunk to root, severed. Then it fell. Slow, like a movie freeze frame. The thud reverberated through the ground, I expected it to echo. It didn’t. Instead it was almost hollow, like the ground swallowed the thud, desperate to cling to any bit of the tree it could. I felt desperately sad, something so beautiful had been cut down in its prime. It seemed pointless. A random act of violence. There’s so much violence in the world at the moment and we nature isn’t immune.

I’d still don’t know why I was so affected. I’ve seen far worst things in life than a tree being cut down, but this felt like I’d witnessed a murder. So today, I feel compassion, sympathy, sadness, regret for that tree and the lonely stump that now sits in its place.

Now to last weeks Writespiration where we were writing about being trapped.

Kim M. Russell was first in this week, with an awesome poem which you can see here.

Bars of moonlight trap me in my bed

Lines of poems trapped in my head

Half awake and feeling half dead

Tied up in sheets

A gathering of knots

Geoff scares the poop out of you with this newspaper piece:

13th May 2015. 10 year Mystery Solved. When developer John Fortune bought the derelict Chappel farm he didn’t expect to solve the mystery of Jamie Cross, missing since he was seven, last seen playing with his siblings one Saturday afternoon. People thought he’d been kidnapped by a stranger and taken out of State. The horror of that thought was awful but the truth worse for Jamie, playing hide and seek had shut himself in an old fridge but no one thought to look inside. His brother said they must have walked past the fridge a dozen times when hunting for him, not realising how close they were. The scratches on the inside of the door testified to his efforts to both get free and make himself heard.

Judy is back again with this evocative poem

Depression:
You wake up but still feel so tired
As if you’ve had no sleep at all.
Your thoughts are muddled and fuzzy
You just want to curl up in a ball.
Your head it feels so constricted
Like someone is squashing your brain
Your body has lost all momentum
And your soul is crying in pain
Yet, there’s no logical reason
Why you want to just be on your own
To lock yourself up with your sorrow
And be in that zombie- like zone
You are unable to communicate
Though God knows, you have tried
Your inmost thoughts want to break free
But your mind keeps them locked up inside.

Sarah up next with this beautifully twisted piece

I thought I was stuck.

That I’d wandered into a place I couldn’t get out of. How could I have enough self-loathing to cling to the rotting branches here when a world full of light surrounded me out there?

I cursed myself for my stupidity.

I knew I was trapped.

That I’d planned this long ago knowing I would allow myself to fall. How could I have the foresight to create this cycle, but not to avoid it?

I cursed myself for my predictability.

Next Jane, with an awe inspiring piece – I thought she had tricked me with an ironic title, but the ending jabs the knife of entrapment right in. Stunning writing.

There used to be comfort in watching the river flow, the sun on the water, listening to the sounds, of birds singing and the wind in the leaves. I used to come here often when things weren’t going right, when words hung in the air between us and I needed to let them settle before I could face you again. Now you are gone, your words, harsh and gentle packed away or simply swept up with the dust of your passing. There was no more need to run to my hideaway for comfort, you said. No more tears to dry in the soft wind from the sea. I was free to be what I wanted to be, you said. No more constraints, complaints. I was free.

Sitting by the river, listening to the blackbird, nothing reaches me. I see and hear but it touches no nerve, sends no chord singing. I was free, you said as you set your sights on some far horizon where I would not be. But you closed the door on tomorrow, left me with the debris of a discarded past. The door is closed; the past a jagged, tangled, barbed mess. Free, you said. The word still rings in my head as I listen to the blackbird and hear only a reedy noise falling into the well at the world’s end.

Finally, Sloan has produced this awesome poem, and thank you for joining us for the first time, welcome and I hope you enjoy the ride.

Were I a fish in a bowl

I think I’d be blue not gold.

“Please let me out,”

and curse the day I was sold.

Were I a monkey in a zoo,

I’d be very angry at you.

throw waste at your face –

Oh wait, that’s just what they do.

Were I a bird in a cage,

my sorrow could not be gauged

If I was a whale in a pool,

swim round and round –

And it always comes back to man,

we’re jailing now, all that we can.

surprised, it’s got out of hand.

and vice-versa, you know.

It always comes back,

be careful of what you sow.