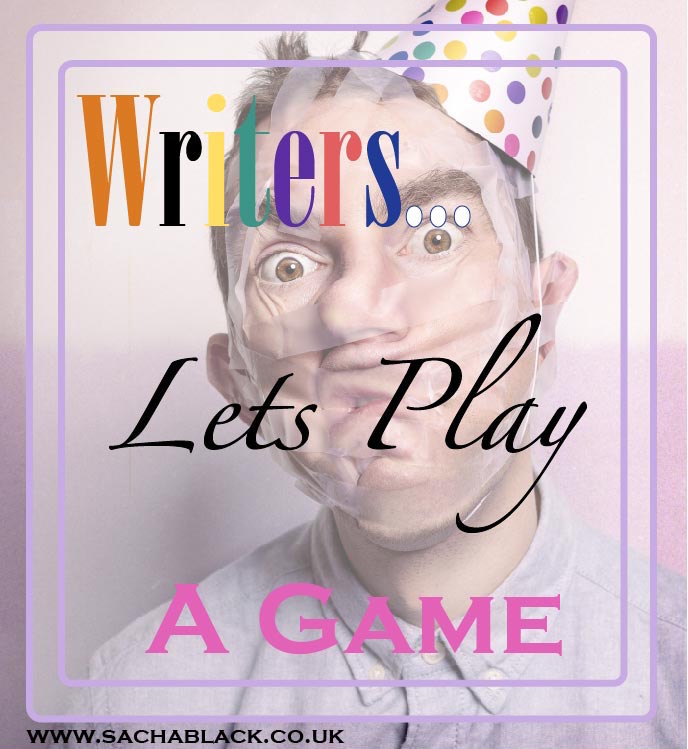 Wherever you’re sat, whatever you’re doing. Scan the vicinity for the nearest document/book/magazine etc you haven’t written. Pick it up.

If it’s anything else turn to page 4.

Take the tenth, thirty-third and the last word, then pick the longest word you can find on the rest of the page.

Write a story or poem in less than 100 words containing all the words. AND I want to know what the words are when you post your story.

If you want to join in, leave your story in the comments or write your own post and use a ping back so I can find it.

Forgive me not having joined in the last few weeks. I am drowning. I will play next week.

Now to last weeks writespiration and your black outs.

First in, Helen, with another tantalising excerpt from Silver and Black

Fear. It thrums through me, cold as Kyle’s kisses, hot as his touch. I can’t see a thing, but I can hear everything. No matter how I curl myself into a ball, hair hanging forward over my ears, it can’t block out the sounds.

I don’t need super hearing to know what they are doing. I can hear Jessie’s moans becoming more rhythmic, rustles and creaking from the bed. I squeeze my eyes shut, hot tears under my scrunched eyelids.

Then I hear a sort of snapping sound, and Jessie gasps, high pitched. Is he…? Would he actually dare, while I’m right f*cking here? The pain in me twists and I gasp too, as though the breath has been punched from me.

He is turning her.

I can hear lapping noises, her moans muffled as she sucks from him, the choked groans he makes. I start to cry, then. Remembering.

This betrayal feels the worst of all. I cry for my mother, that I’ll never see her again. For my father, even his distant love. For the disappointment that I am, weak, easily led, endangering them all. For the fact that I’m going to die here, alone.

Next in Jane, with this reallllly terrifying little snippet from a short story of hers.

The boulevard was gridlocked. Panic turned his guts to water. Without a car they’d never get out of the city. If he stayed in the car, he’d never get home. Swearing violently, he eased himself out the door and into the sea of stationary vehicles and deafening klaxons. He ran, as fast as it was possible to run when a million other people were trying to do the same. It wasn’t late, but black clouds that boiled up from the ocean had already blotted out the light. He couldn’t call the baby-sitter to find out whether she’d picked the kids up from school, or just lit out when she heard the news. No signal.

Heart pounding, he ran, pushing and shoving through the faceless crowd. Home. The bridge was chaos. Refusing to stop he ran over the trapped cars, leaping from roof to bonnet to roof, refused to look at the waves rising like Atlantic breakers, beating the parapet, washing over. He ran. Half way across, a roar louder than Niagara shattered the sky, bringing down a torrent of hail. The lights went out, and the screaming began. The last, long night had fallen.

Geoff in next with a twisted ending I did not see coming.

Bert Hammond knew his job important. Without him Jerry would bring a fiery hell on his corner of East London. Everyone else thought Bert a pain and regretted leaving him to obtain the job as air raid warning. The nicest that was said about Bert was that he was officious. Bert was mostly oblivious to these mutterings. To anyone who asked he pointed to the regulations. Blackouts had to be rigorously enforced.
However a section of the community refused to comply with his encouragement to seal their curtains. Nightly Bert had to identify these egregious non compliances and then report them to the constabulary. The self same local constabulary felt about Bert what most citizens felt about tax collectors – necessary evils. Reluctantly they waited on Bert’s inevitable nightly calls and each time dispatched a Constable.
The citizens complained. A spate of burglaries irritated them more that the slight risk that a sliver of light might attract the Luftwaffe. But Bert occupied the moral high ground and every time someone complained about the lack of police support Bert cited the war effort.
People accepted they couldn’t win. Unlike Bert whose family burglary business was morally darker than even the thickest curtain.

Allie up next with a feel good story

The zip line stretched out across the field. The kids from down the street watched from the safety of the earth as I grasped the handle in my sweaty palms. No turning back now, I told myself. I had been just a little kid when I volunteered to take a turn. Climbing back down would be admitting the truth in the names they’d called me when they thought I couldn’t hear. I bit my lip as I jumped from the platform.

The rollers on the line whirled as trees on the other side of the field rapidly filled my vision. Then my hand slipped from the grip and I was falling. The ground met my back first, slapping the air out of my body as my vision went black. When the light returned the faces of the other kids surrounded me. One of the eldest extended her hand. “I can’t believe you did that. I chickened out three times before you guys got here. Are you okay?”

I took a deep breath enjoying the sensation of my lungs returning to normal function. “That was awesome! Again!”

This time instead of falling, I flew, and while I might still be the little kid from down the street, I knew those other names would never again catch me.

Ritu up next, with some tales of her personal black outs

I have a habit of blacking out. ..
Something to do with low blood sugar…
It is scary but can be kinda humorous too, in a strange way!
Take this one time. .. dancing in a club. I was hot so went for a drink… I opened my eyes and I was lying on a pile of our jackets that had been helpfully left in a fire exit! Huh?! Thing is, none of my friends had realised.
Another time, in the great US of A. A group of us from my university course were in Washington on an exchange visit. We had been invited to a drama production, and in the interval standing in the foyer, I felt a familiar cold sweat and the next thing I know I was on the floor, in a rather snug halterneck dress might I add, my tutor had my head in her lap, calling to me “Tindi, get up, Tindi!” My first name, Ratinder … lovingly shortened! Then there was this almighty shriek from a worried US native “Oh My God!  Call 911! Call 911!”  No, 911 weren’t called, not necessary!
We visited The White House and I posed for a pretend faint picture outside there too, for posterity!
Another time, in a bar, this time, I knew what was coming… I said to my best friend that I felt a bit funny… she turned around to see if I was ok. I wasn’t there. I was on the floor again… it was the height of summer but for some unknown reason another friend of mine family  had a great big bomber jacket with her. I awoke to that as my pillow and a rather dippy lad checking my pulse… on the wrong side of my wrist!!! Such a medical whizz! My best mate has a brother who is a top cardiologist and works in the NHS herself…she rolled her eyes and told this guy to disappear, just as my Hubby Dearest arrived to whisk me home, like my knight in shining armour!

So see, I’m no stranger to the odd blackout… I just make sure I always have something sweet in my bag… just in case!

Next in Hugh with yet again a story with another cracking twist:

There was nothing in front of him but blackness and silence. Ethan Evans had come to the end of his life. No sounds, no movement, nothing but stillness and a thick treacle of black now faced him.

Ethan Evans searched for those shards of light but found none. Ethan Evans was dead. But, what was that? Was that a sound?

“Am I in heaven?” asked Ethan.

“Heaven, darling? No, you’re at the Ideal Home Exhibition in London. I told you I’d get the electric potato peeler off the shelf for you. Are you Okay? That bump on your head looks nasty.”