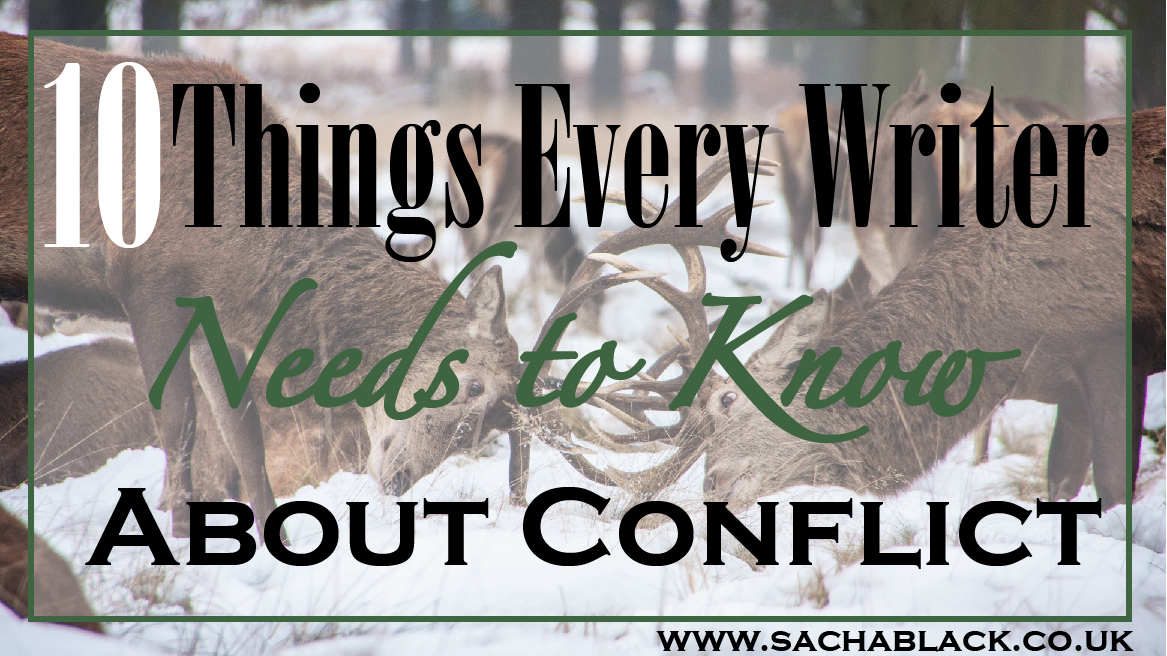 Conflict – the foundation of every novel bled onto the page.

Without it, your book flatlines harder than the grim reaper. No self-respecting book doctor will even attempt to resuscitate it. And yet, you need to, because conflict is the god of novels.

If you’ve been a good little girl, then conflict will dip its mighty hand into Santa’s sack and bestow heavenly book treasures on you, like pace, tension, plot line and well-rounded characters with enough depth to drown a reindeer. But without it, we’re talking dead Kipper slaps to the face.

And nobody wants a stinky dead fish face mask.

But when you love your precious little bundle of baby hero joy more than life itself, torturing them with a bout of – villain/antagonist/insert another form of conflict shaped nappy rash can be rather more difficult than one expects.

Here are ten tips for shaping your books conflict.

THING ONE – From Conflict Comes Everything

Conflict is the source of everything. It’s the book equivalent of the big bang.

Lots of people debate what the most important aspect of a novel is: plot or characters. To me, that’s like asking chicken or eggs? I hate both chicken and eggs, so let’s sweep them under the give-a-shit rug and discuss what IS the most important part of your novel:

two 1: Harry Potter and the Philosopher’s Stone – The main conflict comes from a prophecy made by professor Trelawney: a boy born at the end of July will defeat the dark Lord Voldemort. There’s your conflict, a prophecy of defeat. This spawns the need for a boy character in which the evil wizard can make an orphan and fuck himself up in the process. The first book is based on his return from death to finish the job he started. And there is the entire plot and characters.

THING TWO – The Source of Conflict

While there will be many a’ thing that causes your protagonist angst, like missing the postman, being patronized, inconveniently timed bouts of diarrhea and finding rat dumps in your tuna sandwich, the main source should be your antagonist or villain.

Your antagonist should be directly causing the conflict. By that I mean, any pain your protagonist endures as a result of your stories main conflict can’t be a coincidence, nor a consequence of another character’s tactical wrong doings. The knife hanging out of Aunt Gertrude’s carotid needs to have been put there by the spindly claw hands of your villain. Unless your villains a coward and Aunty G’s murdered by someone else but it has to of been orchestrated by them.

When it comes to conflict, you can’t be broad. Half measures won’t work. That’s like going into a bar on a Friday night and ordering half a shot of tequila. No one does that unless they’re cheap, or a pussy. You’re just short-changing yourself a Saturday morning hangover, and everyone loves a book hangover.

The conflict has to be specific so that the hero and villain both invest in fighting each other. No one’s going to get out of bed to save the world if a wild-eyed science genius might release the plague, but you’re not sure because your cousin’s mate’s sister-in-law said it might only effect ostriches.

Be specific and link the conflict to your hero/villain’s goals.

If you want to properly motivate your protagonist to knuckle dust your antagonist then you need to make sure your conflict is targeted.

It’s no good threatening to kill your protagonists friend’s snake, cause while it would be real sad an’ all, who gives a shit. Now, if you threatened to kill your protagonist’s pet snake, who happened to save his life as a teenager by role playing an Amazon tree rope so he could swing from a burning building with his baby brother in hand and as a result, they never left each others side… well now you got his attention.

But the same can be said for the villain. He has to have a realistic and targeted reason to want to kill your protag’s snake. Say, the snake having the only cure to the ostrich snuffing plague he wants to release on the world.

Here’s where you get your psycho out, don your best conductors dicky bow and wave your big writerly baton around…

Whatever you create as conflict, it has to really mean something. It has to be intricately linked to your protagonist and antagonists values, what is it that means the most to them? What’s their worst fear and what or who would they die for? That’s what they should be battling over.

Take me, don’t hurt my family or friends, and were good. I wouldn’t touch my laptop or coffee either because then I’d have to cut you.

If your characters are emotionally invested in the battle, then your readers will be too.

Bearing your genre, and story in mind, you still need your conflict to be realistic. Sure, a writer can make anything sound plausible, but honestly, if your hero is Superman, I wouldn’t pit a two-year-old baby girl against him, I’m not sure she could conjure the kind of conflict you’re looking for. Without realism, which comes from all hitting all the other steps, your conflict won’t be believable.

THING EIGHT – Time Is Always Of The Essence

Adding time pressure in any novel builds tension and pace. Telling your hero your gonna kill his mumsy dearest is one thing. Telling him, he’s got 12 hours to free the Teenage Ninja Mutant Turtles from his turtle breeding farm will motivate him to listen far more quickly.

THING NINE – If This Were Poker, I’d Be All In

How do you make sure you get the conflict right in your novels? Let me know in the comments below.