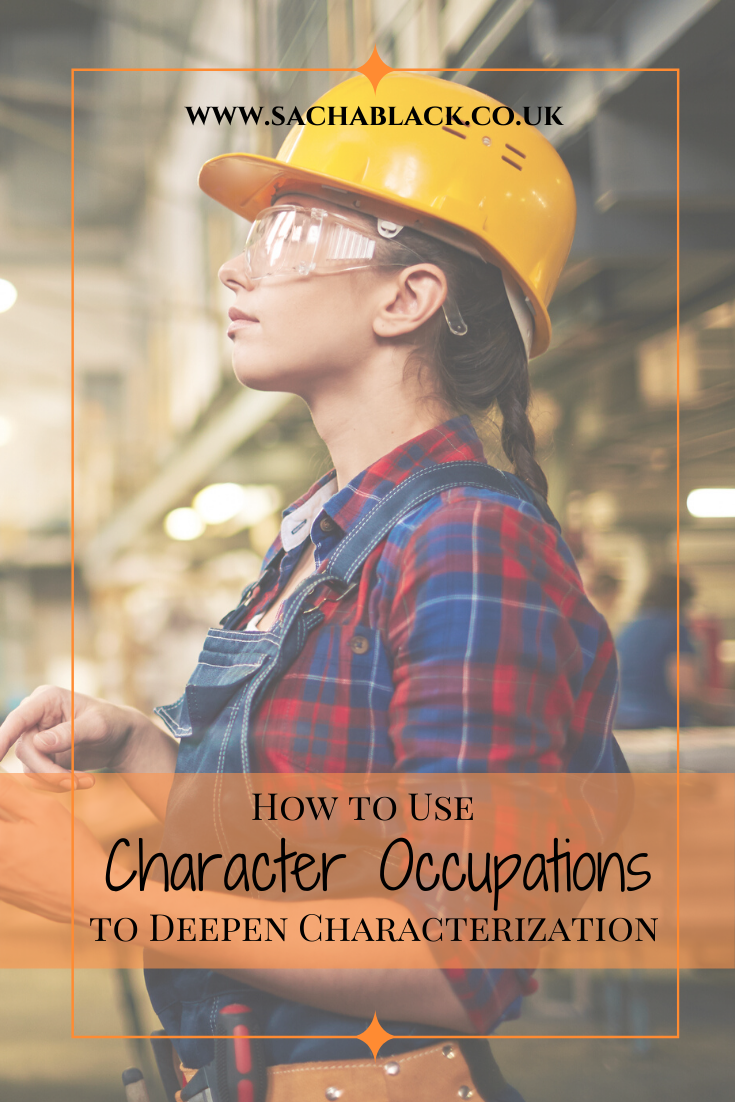 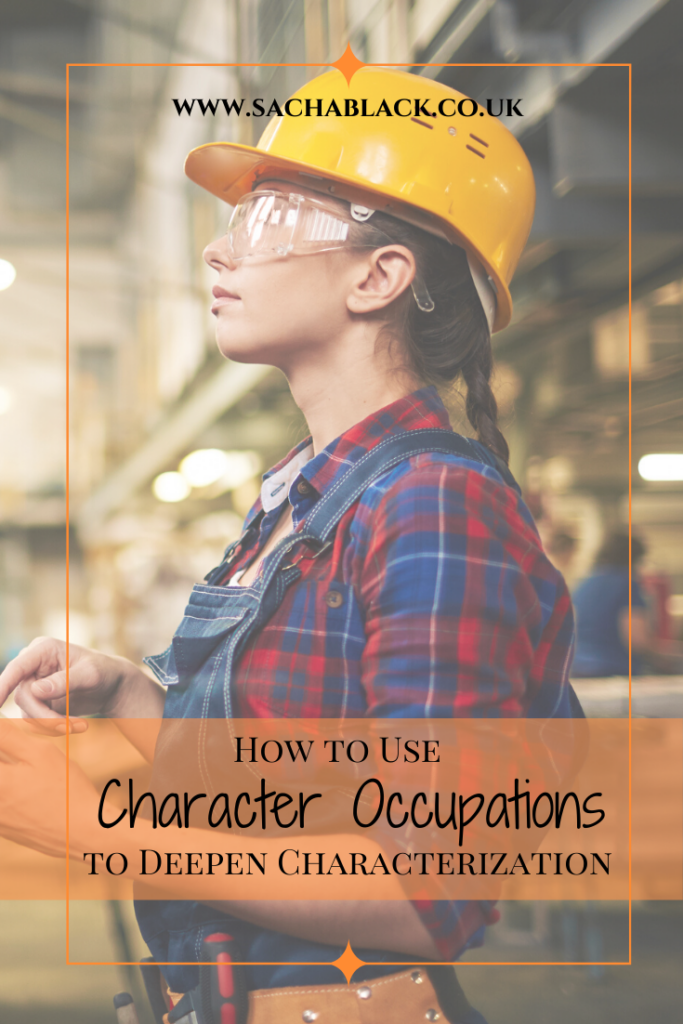 There are some authors whose craft books are automatic purchases. Doesn’t matter the topic, I’m buying it because I know it will be crammed full of amazing tips and tricks. Angela Ackerman and Becca Puglisi are two of those authors. If you’ve been living under a rock then they’re the Craft Thesaurus authors, the first of which was The Emotion Thesaurus. I was lucky enough to receive an ARC copy of their latest book, The Occupation Thesaurus which I read and loved. Today, I’m going to tell you share one huge tip I learned from the book and why you need to have a copy on your shelf. This is how to use character occupations to deepen your characterization.

To purchase your copy of The Occupation Thesaurus you can get a copy using the links below. Please note these are affiliate links:

How to Use Character Occupations to Deepen Your Characterization: Why it’s Important

I’ve been a slack bitch. I’ve never given much thought to my character’s occupations, it’s one of the details I usually throw into the mix once I’ve decided the big picture stuff like wounds, character arcs and the climax. That was until I read The Occupation Thesaurus. Never again will I so casually flap my hands and waft in a desultory character occupation. This book gave me one of those epiphany-style moments—I realized how much a character occupation can do for both the character and the plot.

I preach long and hard about the details in all of my books, 13 Steps to Evil, 10 Steps to Hero and The Anatomy of Prose. It’s the details that bring depth to your characters, it’s the details that create the kaleidoscope of color in your descriptions and it’s the details in any story that make a reader swoon. Why I didn’t thread character occupation into my book’s web of connectivity, I’ll never know. BUT NEVER AGAIN, PEOPLES OF THE INTERWEBS. I have gotten on my word-knees and prayed for forgiveness to the literary gods. 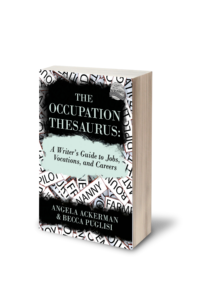 How to Use Character Occupations to Deepen Your Characterization: Connecting Job to Theme

The reason The Occupation Thesaurus gave me such a revelation is because I hadn’t considered connecting my characters job to the book’s theme. I’m currently finishing Trey, the third book in my YA fantasy series. But meanwhile, I’m outlining and prepping to write The Scent of Death, a standalone novel that’s more contemporary YA / magical realism.

Mal, the main character worked in a bar. I figured that was a typical teenage job. And it is—I worked in many a bar and so did many of my friends. But it was so throwaway, meaningless.

If I could capture The Scent of Death’s theme in a sentence it would be something like: “You can’t save everyone” “Not everyone wants to be saved” or in a single word “loss”.

So I decided to change the job to something that connects to his past and the book’s theme. Instead, and I’m yet to finesse the finer details, but he’s going to work in an animal shelter, as a vet nurse or something that involves looking after animals.

How to Use Character Occupations to Deepen Your Characterization: Connecting Back Story to Job

The reason this job works so much better is because Mal’s wound stems from his childhood where he lost a family member and blames himself for it. Working in a bar is meaningless, there’s nothing to connect that job to the book’s theme. It’s functional and adds nothing to the plot. But if Mal works in an animal shelter, then his literal job is to save, rescue and care for helpless animals.

More to the point, this is a job that doesn’t smack you in the face with the theme. It’s not like he’s a doctor working in a war torn country quite literally saving people every three seconds. That would be so crass darling. This way, he’s saving something other than people, and in a more tangential way. Not every scene has to involve an animal rescue, even the act of giving meds, or changing a bandage will embody the concept of “saving” even if it’s subtly.

But wait, there’s more… it gets better…

How to Use Character Occupations to Deepen Your Characterization: Creating Conflict from Occupation

The Occupation Thesaurus’s epiphanies don’t stop there ladies and gents. No, no, no. See, not only does Mal’s job now fit the book’s theme perfectly, it can produce conflict and that, my wordsmithing monkeys, is the crux of all good stories.

See, Mal needs to learn that he can’t save everyone. What better way to show this than by killing a few furries friends. I know. It’s evil, no one should kill the puppy, I’m going to get bags of hate mail. It’s fine, I’ll be the evil queen, SOMETHING HAS TO BE SACRIFICED FOR MAL TO LEARN! Animals get put down, Mal—savior of all—will not like that, not one bit. Enter conflict. There are a million ways you can use this to create conflict and that’s just one, can’t spill all the beans can I? I’ll give all the plot away.

I have a better idea…

You can send your thanks in the form of Belgian chocolate sea shells and oat milk lattes.

Okay if you’re still here, then here is my review:

As far as I’m concerned, Angela Ackerman and Becca Puglisi have immortalized themselves as automatic buys for the rest of eternity. If you’re a writer, do yourself a favor and make sure you add this book to your craft shelf. The Occupation Thesaurus is, without doubt, another home run. Ackerman and Puglisi take character occupations to the next level by showing you how to:

And that’s before you get to the meat of the book.

Each occupation is rammed full of details like the training each job requires, helpful character traits for the role, skills and abilities you’d need to perform it, how to avoid stereotypes, ideas and motivations for choosing the perfect occupation as well as plenty of ideas for how to create friction and conflict.

Each and every thesaurus Ackerman and Puglisi produce is spectacular. The Occupation Thesaurus is no different. Full of inspiration, teachings and knowledge that’s guaranteed to take your writing to the next level. It’s a must, you need this book on your craft shelf.