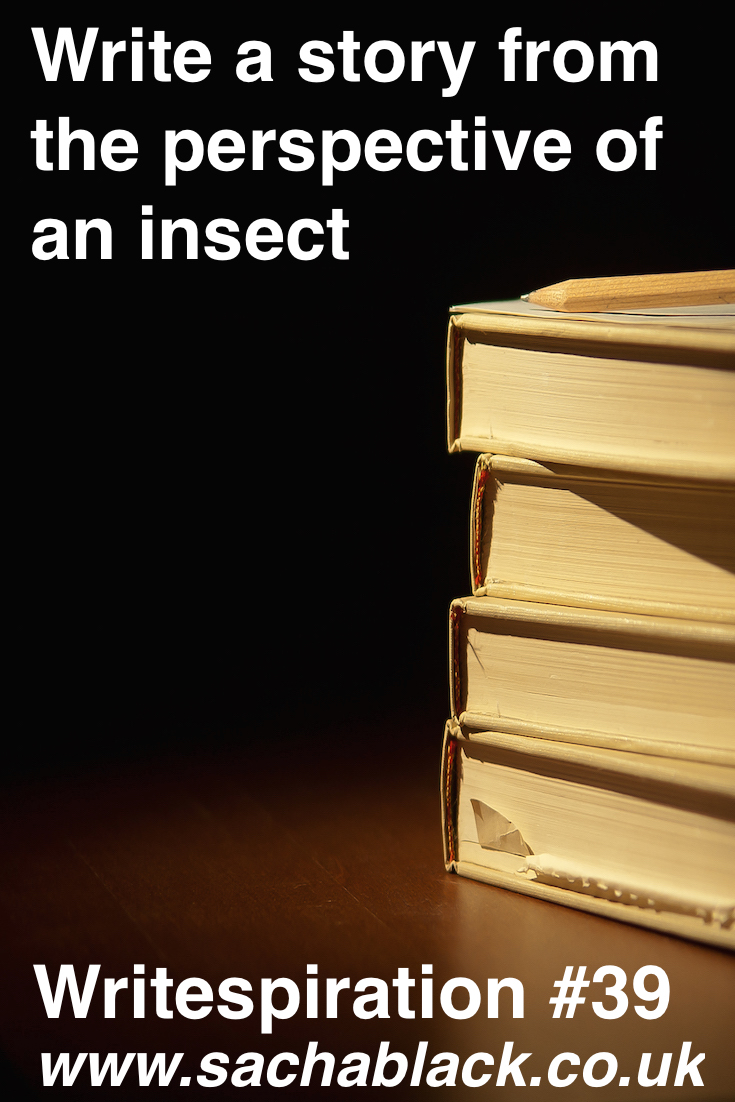 I always write from the same perspective – human, and in the first person. In my novel, I have shape shifters. One of the pieces of feedback I had was to explore further what being in another form would feel like to all the senses. Hence this weeks writespiration was born. I thought I would keep it narrow, hence the restriction to insects, but hey, there are millions of species…

“Those humans are idiots, Mike, I’m telling you,” I said, enjoying the stretch of ruffling my wings through the cold air.

“What makes you say that?”

Mike hopped off the wall and straight onto the plate below us. His sucker pummelling the juicy morsel on the plate. My own sucker tingled at the thought. My legs twinged and I flew after him.

“Be us? Are you sure your not high on sugar, Joe? This is a pretty intense crumb were on. Maybe you should get some juice,” he said, nodding to the glass a short flight away.

He jutted his sucker out a few times, and sat back on his back legs.

“You’re right, they are idiots.”

Now to last weeks writespiration, we had some seriously scary entrants last week. I have to say, despite some minor protest about the difficult prompt, I think we have a bunch of secret horror writers in our midst, you guys are beyond terrifying!

First – Ali who left me terrified of all my ex’s!:

“I did it for you,” he whispers, his eyes swirling pools of desolation in the shadows.

I sigh. “No you didn’t. You were thinking only of yourself, like you always do.”

Of course, his mouth is full of protestation. “But I love you.”

I close my eyes. I don’t want to see, be what we have become. “I just wanted to go to where all puppets go when their strings are finally cut.”

He shudders. “But he would have just chopped you up, made firewood of you, or recycled yo into someone else.”

“Better that than this.” I stare sadly into the mirror.

“But now we can always be together,” he whimpers, and I shake my head in despair.

Except that I can’t. It’s hard to move your head at all when it has been screwed onto the chest of your psycho puppet ex-lover.

Next up Jane – NEVER get in a fight with Jane…

“Isn’t there anything else to watch?” she said and snatched up the remote. “What is it with people and their obsession about clowns being creepy?”
He shrugged. “It’s because they smile all the time when you know they don’t really mean it.”
“Like your mother, you mean?”
“Mine? You think I don’t know what yours says about me, the two-faced cow?”
They glared at one another, she holding the remote as if it was a detonator, he with a plate he’d been drying, balancing in his hands.
“If that’s a taste of the conversation I can expect this evening, I’d rather find a stray cat to talk to. Don’t wait up.”
“Ah, go to hell!” he hurled after her along with the plate.
She grabbed her jacket from the stand in the hallway and flung open the front door.
“Oh.”
A boy was standing on the step, a mask in one hand, a hatchet in the other. He had taken off his smiling face and turned the real one to her, the one with empty eyes. They were beyond sadness, beyond caring.
“He’s through there,” she said and held the door open.
The boy nodded and walked in. She slammed the door closed behind him. A cat watched her from the top of the wall, but slunk away into the shadows when she caught its eye.

Now to Geoff, who… I don’t even know where to go with this – it’s proper scary, will definitely leave you wanting more, and probably a bit less sane!

The Box by Geoff Le Pard

Gran said ‘don’t touch’ in that way she had. Like with kitchen knives and the matches. Like she wanted it to sound not so important when it really was. Jordi wasn’t tempted. ‘She said NO.’ I’d not seen him so upset and I admit there was something about it, not exactly a smell, more a sense of a smell. Like when you think you’ve smelt something bad and get down to sniff and it’s not there.
We’d only gone in the attic because the builder left the ladder down. Usually we couldn’t get there. It was full of Grandpa’s stuff from his days running the circus. Mum told us about it once, after this programme on the telly; she was sort of dreamy but after she told us she said not to mention it to Gran. ‘It’ll just upset her, you know?’ Everything about Grandpa upset her.
Jordi wanted to wear his ringmaster’s hat but I went straight to that box, even though it was tucked in the corner. It looked really old. I suppose Jordi didn’t see it; he’d only just got his glasses, see and he wasn’t used to them.
We thought, after what Mum had said, about not mentioning the circus, Gran would be cross but she wasn’t. Dreamy really. Like Mum. She told us about the travelling while she made tea – macaroni cheese – and the animals. She said about the fun. But as we had our ice cream for afters, she seemed to lose track. That’s when Jordi asked ‘Why did he stop?’
Gran picked up the one picture of him and traced his face. ‘It was the fire. People said… people blamed him. He lost so much. His beloved…’ Her tears splashed the glass in the frame and she wiped it away. ‘Losing his circus killed him, see. He couldn’t see a future.’
Jordi stopped asking questions but I couldn’t. I wanted more but she just shook her head. So when Jordi broke a tooth – I pushed him over but he knew better than to say – and Gran had to take him to the dentist, I was alone. I went into the attic to find that box. It was still there.
When I tried to pick it up it was too heavy. On the side there was a label. My name. For a moment I was stunned until I remembered I’d been named after Grandpa’s youngest son who’d died before I was born. This must have been his toy box.
Eagerly I opened it; it wasn’t locked. As the lid came off I sat back horrified. A burnt boy with no eyes stared blindly at me before jumping out. We fought but he was too strong. He ripped and ripped at my face, prising first one and then the other of my eyes from the sockets. Even though I was screaming and could feel the blood on my cheeks, I could hear his cackling, his scurrying steps on the ladder, the door to the attic being closed. And then I tried to stand and felt the box lid pressing the air on my face. I was shut in and at that moment I knew, just knew that no one would think to come and look for me in that box.