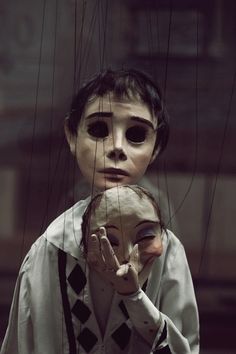 When I saw this image on pinterest I didn’t even have to think twice. I pinned it immediately. Why? Because I thought it was terrifying. I have a bit of a morbid fascination with anything that makes me feel uncomfortable or scared or awkward. This photo sent ripples of chills down my back. I scrunched up my face and peered closer even though I was a bit scared the puppet might jump out of my phone at me! It also happened to get a lot of repins, I figured if it was popular on pinterest, it might also be a worthy inspiration. I hope you like it… or if not, I hope it terrifies you! :p

Even though it was dim, I could still see his bony finger extend out towards me, as sharp and accusing as the icy air around us.

“You’re fault. You’re fault,” he sang in childlike tones. He danced around my chair on his disembodied strings, making jerky twists and convulsions.

“How is this possible?” I mumbled through the wadding stuffed into my mouth, “He’s inanimate. This can’t be real.”

He stopped dancing and faced me, his strings suspended above him, drifting lazily.

I shifted in my seat, desperate to loosen the ropes that were restraining my wrists. I yanked my shoulder round, but instead of releasing it tightened the rope and pressed my arm into the chair’s frame.

“What do you want from me?” I mumbled, desperately shaking my head and tonguing at the wadding trying to push it out of my mouth.

Sweat began to drip down my back and forearms. I strained again. The wadding pushed loose. I caught a finger under the rope’s knot. If I pulled hard enough I could loosen it enough to get free.

The puppet cocked his head from behind the eerie white mask. He let out a shrill cackled and  pulled the mask down.

Hollow eye sockets stared back at me. Empty of sight, yet he still peered at me knowingly.

“You should have made me eyes.”

He scuttled out of sight. I slammed my body against the chairs back and it edged a little way towards the door. I did it again. Each time harder. Pain splintered across my shoulders, but I ignored it. I tried to jump my way across the floor instead. One hop. Two. I paused, panting. My heart hammered against my rib cage, each beat a thunderous storm racing to get out of this room.

Something glinted. Long. Thin. It was metal. My eyes widened. Another cackle. The lights went out.

Now to last week’s wonderful Writespiration entrants who were writing scenes where characters get criticised:

First up Rachel with this emotional 100-worder:

“We’re going to a wedding, not a funeral! Look happy.” she told me as she put on mascara, her face inches away from the mirror.

I sat on her bed watching her waiting for my turn in front of the mirror. I was happy. But did she remember the way she spoke to me minutes ago?

“Don’t wear your hair like that. Those shoes don’t look well with that dress. You’re going to put on make-up, right?”

Sure, I was happy to go to the wedding. It was just hard to be happy sitting in the same room as her.

Next Geoff, with a hilarious, (and true) story from his school days:

Charlie Gilbert taught us French in the first form (year 7 these days). He was as old as the planet, had whiskers that picked up radio waves for fun and hated, as in became demented, if you spoke while he was talking.
Whoever timetabled French lessons for the first period after lunch in a warm September was barking. The only ways to keep awake while Mr Gilbert devoted his time to explaining the beauties of avoir were (a) to jab your thigh with a compass (b) try and go cross-eyed or (c) talk to your neighbour.
Mr Gilbert heard the whispering. His voice could have been used in place of CPR to bring people back from the dead. ‘WHO SPOKE?’
Necessarily no one confessed.
If you can see the Great Wall of China from space then, despite the vacuum I’m certain you could hear Mr Gilbert’s next question. ‘CONFESS OR DIE!’
Still no one spoke.
Mr Gilbert was small, barely higher than desk height and despite his age he was sprightly. ‘RIGHT.’ He turned and dragging his desk to the blackboard, an old fashioned thing that was on a loop inside a large frame. We watched as our mad French master climbed onto the ledge at the top.
Someone sniggered, then three boys and eventually we were all laughing. Despite the fact his moustache hid his mouth the twitching told us he too was amused. He began to tell us about his time in Normandy during world war two. He always did that when he relaxed.
‘Where is your…? Oh, there you are Mr Gilbert. Dusting perhaps?’
The headmaster, passing our classroom and noting (a) the absence of a teacher and (b) hilarity amongst the pupils had entered to be confronted by the unexpected sight of Mr Gilbert practicing his Buddha impersonation.
‘Yes. Sorry, head. I was, er… The thing is…’
‘Your chalk sir. It got stuck.’
‘Chalk?’
The Head turned from the class to the Master and back, bemused. Mr Gilbert shrugged, sheepishly. The head mirrored him and left.
Slowly Gilbert walked towards my desk. The speaker had been the boy, Colin Budd, who sat next to me. ‘Which of you two miserable wastes of air spoke?’
My neighbour pointed at me so I pointed at him. Mr Gilbert sighed, studying me carefully. ‘Le Pard you are a weasel but no rule breaker. Budd you break more rules than the rest of this class breaks wind. You are no doubt the guilty party. But I cannot prove that. You will BOTH go to the head and explain why you decided to try and make him believe I’m bonkers.’
Colin Budd strode out, happy, no doubt to be avoiding more French. I trailed behind, thinking hard about my behind and the likely outcome of a visit to the head’s study. We waited outside for a lifetime. When called in Budd explained, implicating both of us. The head nodded. Then he asked, ‘Does Mr Gilbert often sit on the blackboard?’
‘Yes sir,’ we both chorused because in truth he did.
‘Poor man. Still suffering from the war I suppose. Always the urge to reach higher ground.’
He sent us on our way.

Keith with a prequel, to a sequel which you can find on Esther’s weekly writing challenge!

“Dave; you’re good, but you’re not that good.” I was in a one-on-one meeting with John, Head of Programming. It was our preliminary meeting about the proposed wildlife documentary.

“And what’s that supposed to mean?” I replied, getting to my feet to press home the point.

“Sit down, Dave. Your proposal for this documentary is just not on. It’s not going to happen. Not the way you’re asking, anyway. Five camera crews? Five? Really? And how many sound men do you expect?”

“You can forget that for a start. Listen, Dave. We don’t have an unlimited budget. We all have to work within constraints. Your crew for this job will be two cameramen, two sound men, director, research lead and four support.”

“I can’t do this justice with only ten crew. You, of all people, should know that.”

“Then I’ll find someone who can.”

Incensed, I leaned forward towards him. “You know there’s no-one can give you the result I can, and no name is as well-known as mine. My name on the credits is enough to push the ratings up by 20%. You said that yourself, when you renewed my contract.”

John stood up and walked away from his desk. Having worked for him for eight years, I had come to expect this, his trademark move. I knew now, that he would wander around the room, hands clasped behind his back, while he delivered a lecture.

“Dave, Dave, Dave. You must be the most naïve man on the planet. I said what I had to for you to sign the contract. Yes, this job is important. Yes, it’s a story that has to be told and yes, you will tell it well. However, if you think that your name and the audience draw that you imagine you have is going to convince the Board to increase the budget for this job by two hundred percent, just to satisfy your ego, you’d better think again. Now bugger off and redraft your proposal with a crew of ten. I want names, jobs and full details of what you need in terms of location accommodation and support equipment, too.”

“Yes, boss,” I said as I got up and left John’s office. I was elated. I got exactly what I wanted. Even after all this time, he hadn’t recognised that by asking him for a great deal more than I need, I had given him loads of room to make his cuts. He was, no doubt, feeling very self-satisfied, having beaten me down yet again.

Finally, the lovely Ali, with this heart wrenching tale of new mummy emotions, something a lot of us can relate too:

“This has been going on long enough,” she says, pressing her lips together into a thin hard line of disapproval. “This won’t do at all. You look a mess.” Her eyes rake me over, leaving scars no one can see, but which I continue to feel long after she has gone.

I force a laugh, patting my hair self-consciously. “I’ve just had a baby. Nice clothes and make up aren’t that important to me right now,” I say.

She humphs self-righteously. “Well they should be. You don’t want Mikey’s eye to wander do you?”

I stare at her, aghast. My mouth drops open, but no words come. Fortunately, he wades in to my rescue. Or so I think.