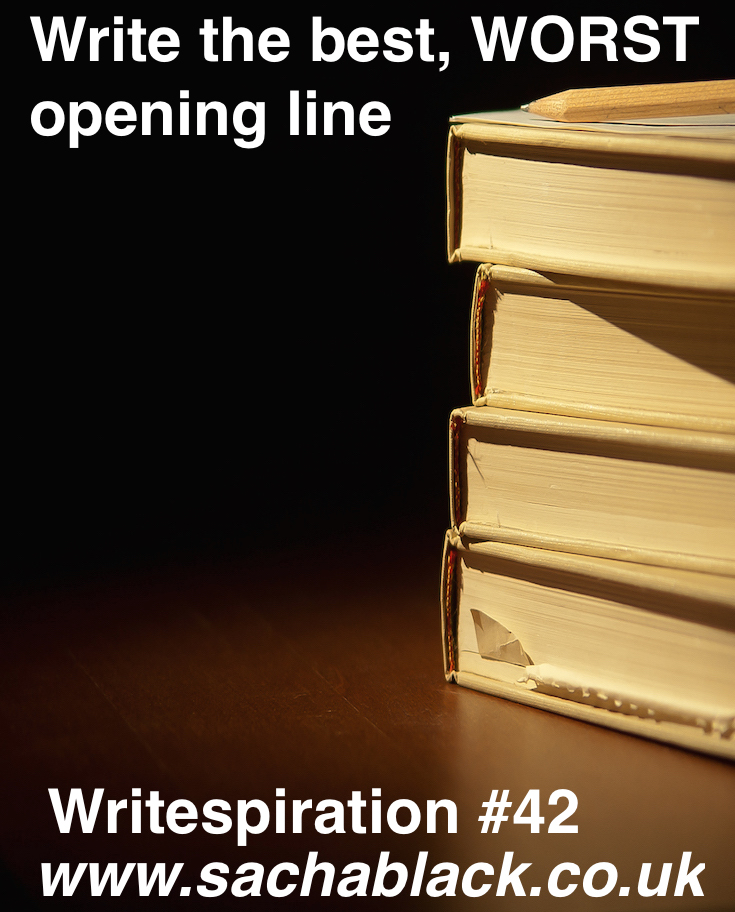 We constantly worry about how to write better. But actually, there’s a benefit to being able to recognise when you have written badly. And sometimes it’s fun to just reel off a load of codswallop.

This week, your challenge is to write the WORST opening line you can. Give it your best, and produce your worst!

Because this is an actual competition, The Bulwer-Lytton Fiction Contest and I am secretly amused by all the nonsense that is to come, I am going to pick a winner… The winner will be announced in next weeks writespiration, the deadline is Sunday 31st May.

If you fancy it, why not submit to the real competition? – their deadlines the June 30th.

here’s mine, and it’s definitely bad!:

It stunk like rotten putrid gone off eggs but dear old mumsy with her tatty dirty apron thought the round pancakes were a success – I really really didn’t want to eat them – But decided not to offend her and held my bulbous nose and puckered up my reluctant lips, bottoms up, I thought.

Now to last weeks writespiration. First the lovely Jane who wrote a stunning poem that was originally published in the Ogham Stone Literary Journal. You can find the post on her website here.

Often at the turning of the year,

When the grass is bright and damp with autumn rain,

And last buds open with the failing sun,

I listen to the windsong in the trees.

When white-winged gulls blow in from stormy seas,

And the tang of salt hangs heavy in the air,

I hear the waves break on a lonely strand,

And taste the smoke and ash in long-dead hearths.

When only starlight guides the homing geese,

I hear the echo from the vaulted sky,

And feel the northlands in their beating wings.

But when the blackbird sings his end of summer song,

And the white gull skims the restless ocean foam,

The whispering comes from deep in blood and bone,

The wind, the stars, the heart’s pulse call me home.

Ali submitted an emotional entry. It really makes you feel her longing for a sense of belonging:

Their eyes hook into my back like claws as I pass by. They keep their thoughts locked and silent in their heads, but their faces smoulder with resentment, distrust. They bite back the words but their message burns into my skin just the same, “You don’t belong here.”

And they’re right. I don’t. But I won’t go back, I can never go back, though my heart yearns for home. Those like me, well, we’re not welcome anywhere.

For me, home is not bricks and mortar. It’s not tied up in four walls, anchored in place by geography, or a slot in the vastness of time. The home I long for is family, acceptance, love. Home is not where I came from, but perhaps where I’m travelling to.

Geoff entered this last minute flash, and what a piece it is, he created such a disturbed character crazed by his loss in so few words.

It’s the feeling of the bricks, sort of not quite slimy to the touch. That’s what I remember. Derby smooth stone, someone told me and they’re right. It does have that same slippery texture. But it isn’t the same, feeling an abstract. There isn’t the connection to the place and time. When I leant my face against its soothing surface after the burning; the hardness when I pressed my hands against the bricks, trying to push through the wall as Jimmy held me back; the way my tears made the slippery surface glisten. I wanted to stick to that wall, melt into it, be part of it. I’m still not sure whose screams I remember from that day but I’m sure some of mine were trapped in those bricks. Jimmy told me they demolished the cottage – ‘unsafe’ he said. I think it’s because of the ghosts. There had to be, after that fire, after those deaths. For a long time I wanted one of those bricks; it was all I asked for, for Christmas, birthdays, certain it held some part, some essence. Jimmy says it was me asking for bricks that made dad lose patience, had me committed here. I’ve plenty of time to lean again the bricks in this place, plenty of time to remember, to hear the screams. When I get out, I’ll go back, get a brick and hold it to my cheek. Then I’ll be home again.