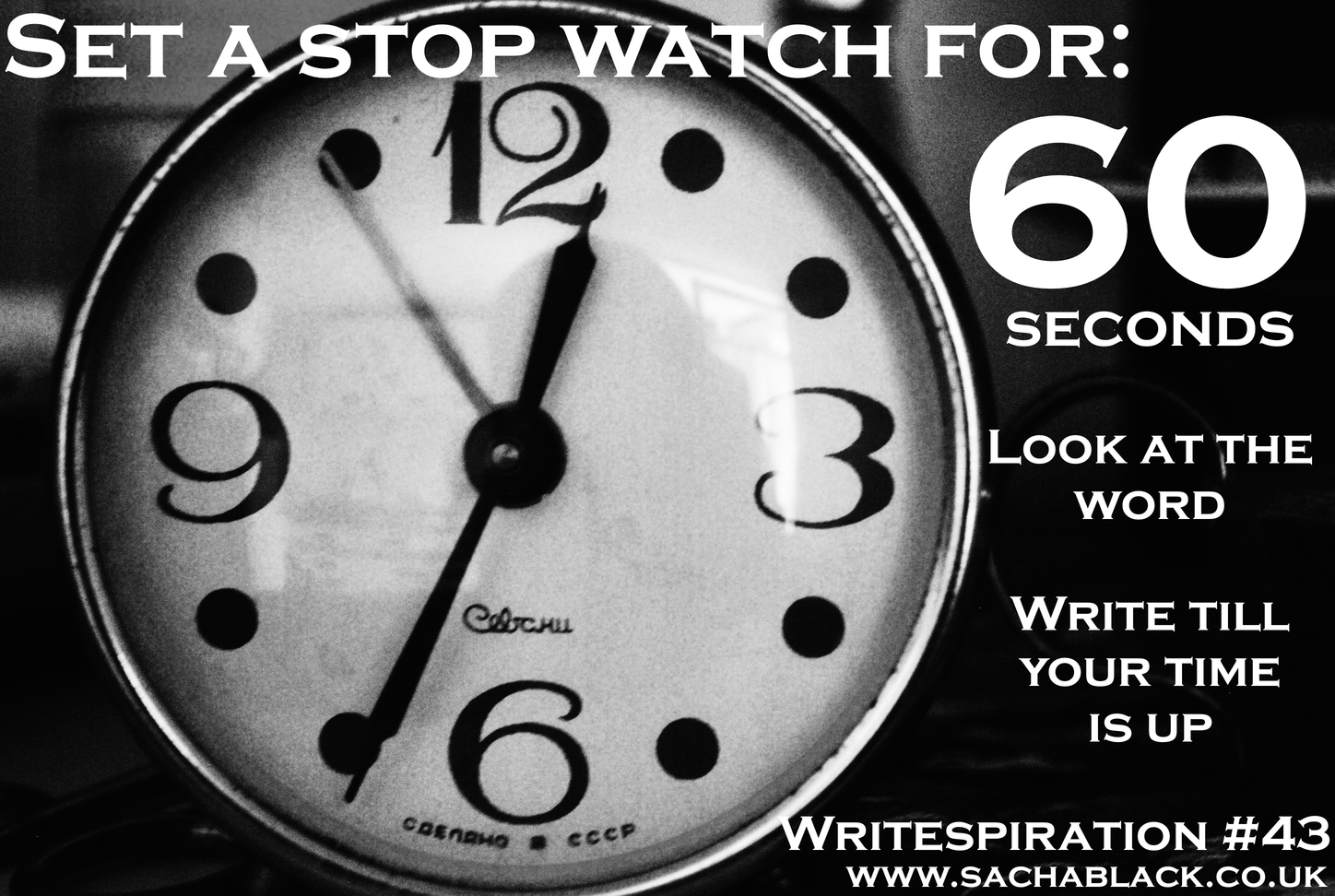 A slightly different challenge this week. It’s another of my favourite writing sites to help unblock the block! The website is called One Word. The aim of this game is to use the word posted below (don’t look till you are ready to write) as a prompt and then free write for 60 seconds, no stopping. Don’t edit, don’t worry, just write. Mine is right at the bottom of this post with the prompt word, no cheating!

Now, to the winner of the worst possible sentence from last weeks writespiration, and boy did we have some cracking entries. And by cracking, I mean awful!

The winner of the most terrible opening line is………

Jane congratulations Jane, you wrote the most terrible opener, giving everything away and breaking all sorts of rules in the process! Fabulous entry:

‘It was terrible knowing that they were all going to die in a house fire, except for Jill who runs off to South America with the postman who apears in chapter sixteen, that Simon would fail his Oxford first year exams and end up working as a petrol pump attendant until he throws himself off a bridge in chapter twenty one, and that her operation would be a disaster and leave her housebound so when she drops her lighted cigarette onto the sheet she can’t even raise the alarm, but you have to live through the next four hundred pages, don’t you?’

Runner up goes to Keith for the most depressing adverb rich opener I’ve ever seen! Fantastic effort Keith 🙂

John wasn’t sure where he was going; walking solemnly and forlornly through the pea-souper fog, straining his weary eyes to make out the slightest detail murkily presenting itself to his age-worn visage; the laughter lines for which he was, until recently, famed giving way to worry-lines as he plodded relentlessly through the misty, dewy, heavy, moisture-laden air under a leaden sky that was constantly threatening to unload its heavy cargo, its payload, its bounty onto an unsuspecting world below, a world where hope had given way to despair, where happiness had been supplanted by depression, where gaiety had fallen prey to solemnity, a world whose very atmosphere, the elemental structure that is designed, intended, purposed to support and nurture life, is slowly, but surely, inexorably and remorselessly threatening to stifle it, to extinguish it, to render it extinct.

Helen Jones new to writespiration, gave a stonking effort with this terrible opener. If my wife had been choosing the winner, Helen would have won 🙂 – it made Mrs. Black laugh out loud.

‘He had always liked penguins, and those shoes with the velcro fastening.’

Geoff was far too good but he does get an honourable mention for the two most disgustingly vile sentences:

‘And it’s confirmed: Nigel Farage will be the next Prime Minister.’

‘The only interesting about Tarquin was his toe-clipping collection which he had spent years cataloging: this is his story (with illustrations).’

To this weeks Writespiration, remember, don’t look at the word till you are ready. Set your timer for 60 seconds don’t edit just write fast. Scroll down to see the word:

Why is silence so deafening? It ached in my ears, the pounding silence swallowed up any thoughts I had. It hurt. Hurt like the loss of my parents. No more voices to call me in at the end of the day. No mother to shout upstairs “dinners ready.” Just endless silence.