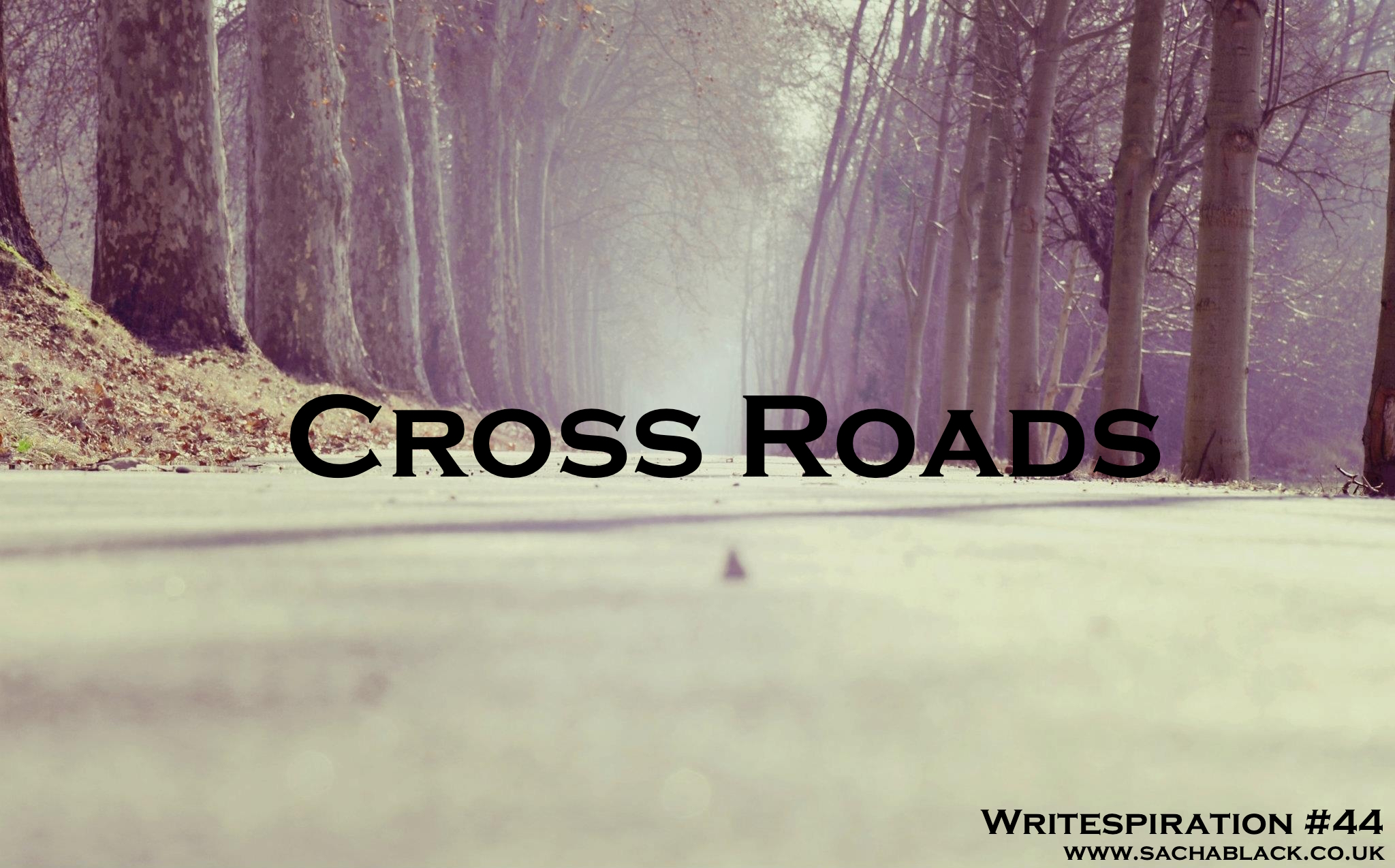 Life’s a funny old thing, so often we go through difficult times and have to make hard choices. Sometimes we lose friends, loved ones, gain new ones, have children. We travel and feel moved to change our entire lives. We give up careers and start again. I’ve seen my fair share of cross roads probably the most significant was being told if I waited to have kids, it might be too late.

Turn left – be young free and have money, travel.

I turned right. It was the right decision, but when you’re faced with a cross roads the decision isn’t always obvious.

This week, the writespiration is all about Cross Roads. Maybe your character is physically at a cross road, maybe they have a choice to make. If you fancy joining in, jot a few words or a short story and I will publish it with next weeks post.

His incessant twitching was irritating. The tap, tap, tap, of the tightly wound knot rattled against the chair I’d tied him to. It was giving me a headache.

I put the cold barrel of the magnum against my temple hoping the cool metal would ease the ache and pulled another dining room chair out. I sat down in front of him.

Sweat dripped off his face and crawled across his shirt. I pointed the gun at his chest, rubbing the barrel into the sweat.

“Get a grip of your self…” I dug the gun into his chest a few times. Each time, he wince harder.

I slid my finger over the hammer and pulled it down till it clicked.

“Did I say you could talk?”

He pulled his lips tight and shook his head.

“You had twenty years of marriage to talk, Marty. Now it’s my turn.”

I raised my hand and fired the gun at the wall. The crack thundered across the dining room. The bullet ripped into the glass cabinet. Glass splintered and showered the dining room table I had laid night after night for twenty years. My favourite china set plummeted to the wooden floor  shattering and camouflaged itself in amongst the glass.

“Look what you made me do, Marty,” I said waving the gun at the remains of my dinner set, “that was my best fucking china.”

I stood up. My chest felt tight. Blood rang in my ears. I scanned the dining room with its matching curtains and furniture.

“You took the best years of my life, for what?” I peered at the collection of photo frames filled with nephews and nieces instead of my own children.

“A bunch of whores and prostitutes?”

I shook my head and swallowed the lump in my throat.

“I was going to give you a choice. But you know what I realised, Marty?”

“Don’t fucking answer that… I’ll tell you what I realised. You don’t deserve a choice. This is my cross roads.”

I leant into his face, my nose millimetres from his.

“You stink like shit, Marty,” I said wrinkling my nose and trying not to breathe in his sweat.

“I want a divorce… and this…” I said pushing the muzzle of the gun deep into his crotch. He flinched, lip quivering. A wet patch spread across his trousers. I pushed my finger onto his lip, “shh,” the corners of my mouth curled into a toothy grin and I cocked the hammer.

“This is for the for the two decades of tears I shed each and every time you fucked another woman. This is so no one else will ever have to cry for you again.”

So to last week. I loved last weeks writespiration, so I will endeavour to post it again albeit it with a different word, I think it produced some fascinating entries with wonderful insights into all your minds!

First in with a response to last weeks Writespiration was:

Rachel with this fab entry

There was an eerie silence lingering in the air. Everyone eyeballed each other wondering who was going to be the next to stand up and say something. They were all thinking. No one wanted to be the bearer of bad news and played “nose-goes” inside their heads willing someone else to say something.

Next Helen with a super eerie entry

Silence. It was all around him. Weighing heavy on his ears, on his time. Time that he scratched out, one by one on the damp bricks, the only indication that it passed the slivers of light through the barred window high above. No one came to see him. No one cared, it seemed, that he still lived.

Silence. A beautiful voice, his laughter are forever gone. Lost in silence are the sweet words. “hey, Mum, love you.” The silence is unfathomable. The silence tears at the heart.

Silence is a long way from home, which is a hollow noduled bucket in Minneapolis and rather twee in a woebegone sort of way. Carriage bags have a habit of breaking silcne wit a rustle and a grimace. Shoping with silence is a chore and

If silence is golden then why am I not rich and living in outer space where it is silent. I love being silent like in the silent films which I don’t understand because they have no talking in them and are often in black and white and all fuzzy to watch. I wonder if they served popcorn in those days?

Silence. The word sounds so loud when I think about it. Like when you put your head underwater. The sound of water. And the night air when everything else is quiet. Except the silence.

Foy joined in this week with a wonderful dialogue entry

“Would you shut up already?! I told you we’re not going to the zoo to harass the lions today.
That’s next week.”