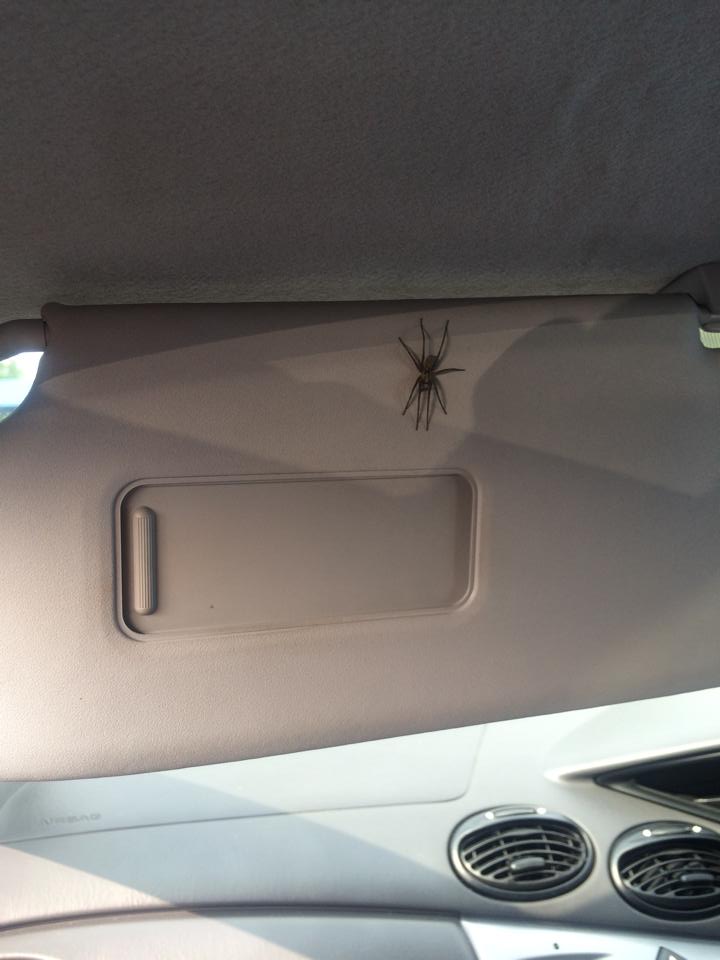 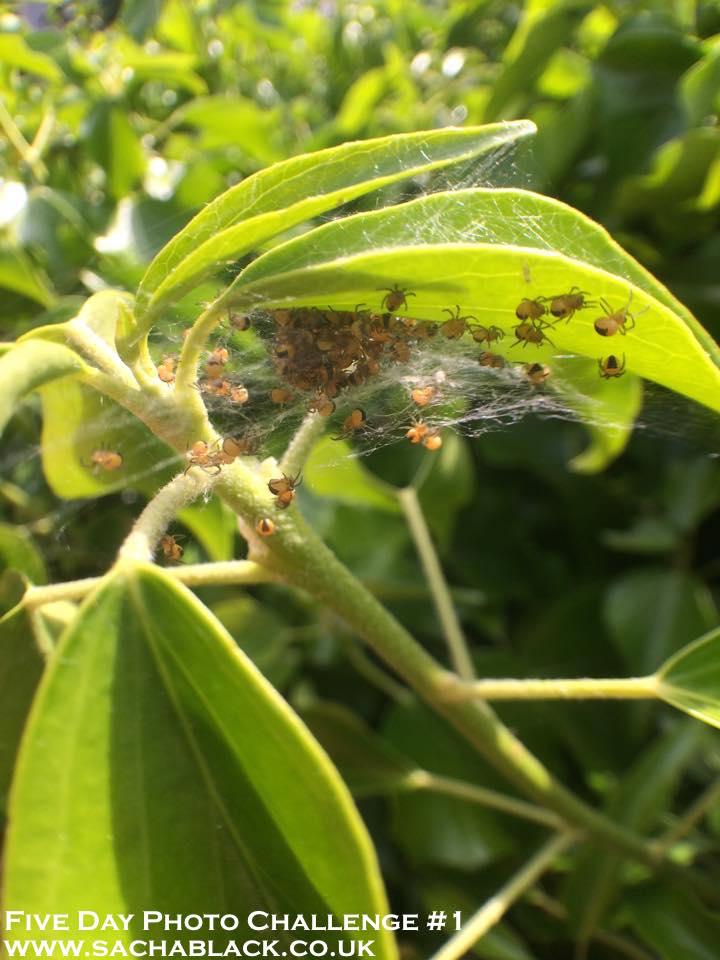 I was nominated to take part in this photo challenge by Ali Isaac, who has a wonderful blog filled with fascinating tales of Irish mythology – check it out if you haven’t already, you learn something new with every post. I would like to nominate three of my blogging compadres to take up this photo challenge…

1. Ula because I think she’s fascinating and would love to see what she shoots

See the rules below, never been much of a rule follower, so not only am I doing this over five weeks instead of five days, I highly doubt I’ll only post one story too! :p

The photo is of a common garden spiders nest of babies. Whilst they are growing as eggs they shed a skin. Once born they cling together usually in balls – but in trying to capture a macro shot I disturbed them – until they shed their second skin.

I really hate spiders, mostly because I’m terrified. Not just a little squeak and run away scared. I’m the shove you out the way, jump on chairs, hyperventilate kind of scared. It’s those dark hairy legs. *shudder*. The thought of one crawling over me with those eight little legs dancing on my bear skin. Oh my god, I have to stop describing it my shoulders are twitching and I have goosebumps just thinking about it.

As part of the challenge I have to do a story – I’m going to do two (told you I couldn’t follow rules).

First up a personal one:

The wife and I had taken a jolly in her car – unusual at the time because I had just bought my new car and so understandably we were using mine a lot. The wife drove, she always does. I have no idea why because I constantly get car sickness unless I drive. But anyway, she was driving. If you know me – you know I have a thing about eyebrows – I could go out in crappy clothes covered in baby puke and without make up on. But I cannot leave the house unless my eyebrows are penciled in. Just can’t. Well I took my trusty artists pencil with me and needed to slap the paint on. So I pulled down the visor. I swear it was the size of a horse. Not a pony, but a fucking great big shire horse.

My wife says she can’t recall a time she has seen me move faster and she certainly can’t understand the physics of how I ended up still strapped into the front passenger seat whilst being physically located in the back. She also could not help unstrap me because she was in pieces laughing at my shrieks of horror. I was not laughing. I was cursing her for having a three door car. I was trapped in the back, with the tarantula about to advance on me and EAT ME. I was not laughing because I was too busy trying to climb through the boot to get out of the car. Here’s the little bastard:

My second story is in honour of my challenger, Ali. Ali is amazing at retelling mythological tales, so I thought I would do some research in her honour and look to see if their was a myth based on spiders, although I shan’t attempt a retelling – I’ll leave that to the expert :).

The symbology of spiders is an interesting one. I had wrongly (because I’m shit scared) assumed it would be all horror stories and pincers. But actually although spiders are predators they are commonly seen as the Great Mother. A weaver of destinies. Weaver coming from their web creating skills. In Cameroon they represent diligence and wisdom and in China a spider on a thread is a symbol of luck. Spiders weave webs like we do our lives, making choices that become the constructs of our lives, as they are the structures for their houses.

The Hopi (Native Americans) have a creation story with a spider woman as the goddess of the Earth. With the sun god Tawa, they created the first two beings.

In Greek mythology there was a girl called Arachne who was arrogant about her skills as a weaver. She refused to acknowledge that her gift came in part from the goddess Athena goddess of war and handicraft. Athena gave Arachne the chance to beg for forgiveness and be humble- when she refused Athena challenged her to a weaving contest. Arachne produced stunning woven work and Athena was angry at the high quality of her work so in a war like rage she destroyed it. Arachne became depressed that her masterpiece was destroyed and hung herself on a rope. Athena took pity and loosened the rope noose which became a web and she turned into a spider so she could weave forevermore. This is where we get the class name Arachnid from.

You can find out more about the myth here.

Below is the rest of the photos I took trying to get a good one. I have a macro lens for my iPhone, which means I had to get up close and personal with a ball of spiders – you can imagine my delight. Why I chose this as my first shot I have no idea!

The rules of the Five Photos, Five Stories Challenge are:

1) Post a photo each day for five consecutive days. (Sorry I’m cheating and going to do it once a week!)
2) Attach a story to the photo. It can be fiction, non-fiction, poetry, or a short paragraph. It’s entirely up to the individual.
3) Nominate another blogger to carry on the challenge. Your nominee is free to accept or decline the invitation. This is fun, not a command performance!