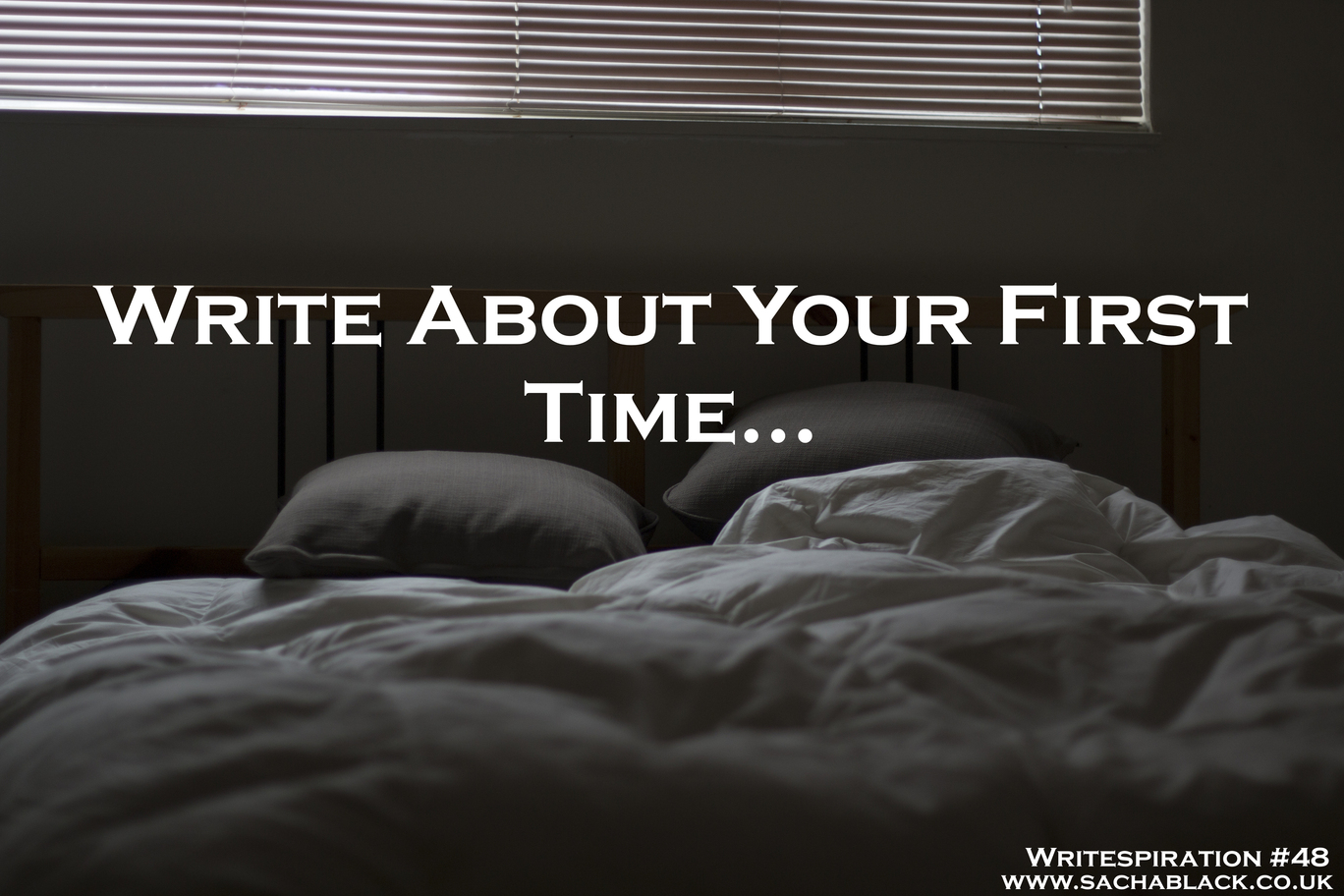 Oh you filthy rot bags, not that first time… well you could write about that… but you don’t have to… Here’s mine:

I took a sip from the dark glass in front of me. The liquid was ice cold and the numbness sank straight to my stomach. Could I do this? What if I refused?

“We’re waiting rose,” his voice rumbled through the muggy air, and his steely glare was as hard as the gun’s barrel glinting at me.

I gnawed at the inside of my lip. The numbness in my stomach furling into knots. I’d never even touched a gun, let alone fired it. What if I injured the deer instead of killing her. Would she suffer? Would she feel it?

“ROSE!” he snapped. I flinched, as his hands rested at his waistline. I glanced at his belt buckle, his fingers flexing over the leather band. I shuddered, it was me or the deer.

I picked up the gun. It was lighter than I’d expected, its cool metal easing into my hand like I’d done it a thousand times before.

I nodded, fingers quickly finding the right catches. Why did this feel normal to me? It should have been alien, wrong even. But it wasn’t. My hands knew the gun like an old friend. Maybe dad was right. Maybe I was destined to be a hunter.

Now to last weeks writespiration, where we all got a bit hot and steamy… I mean sweaty!

Sue Vincent got all reminiscent with a rather smelly travel experience.

Sweat? Not even a cold shower will make me look less like a freshly boiled lobster for more than a few minutes… and sleep is going to be a problem, even with the windows open. I remember being scared of that… All Christopher Lee’s fault of course. Vampires… that made me sweat as a child…Perhaps that’s why going to France was such a good idea? Living there I learned all about garlic… and the second-hand ooze of it through the pores of overheated bodies in the Metro. Keeps more than vampires away! Except, you don’t even notice it when you are as bad yourself… Paris was hot in summer too, but I loved it…I remember cooling hot legs in the fountains…mint tea in the Algerian café… and 3am raids on the all night deli for champagne and wild strawberries… Though perhaps I should draw a veil over that particular association…

Geoff confessed a bit too much?

I sweat – none of that gently glowing or perspiring nonsense. Genuine suppurating pores, pouring pores if you like, that’s me. Not proud of it just have to live with it. But it has it’s advantages. The cooling bit, the fact I don’t get very dry skin and the dog loves me as I’m the best way he has to get salt… So there you. Another conf

Helen got all dark and mysterious

‘It’s hot in here. But then that’s not surprising, I guess. I shift a little on the stone floor, hugging my legs in close, tucking my clothing close around me as I huddle against the curving brick wall, my eyes closed tight against the glare. Sweat. I am drenched in it, great pools under my arms, trickling down to sting against the scored lines in my skin, the edges crackling in the heat of the vast oven. How did I get here? What was my life, that it should come to such a pass?’

Hugh… well I think Hugh did get a bit hot and steamy!

Sweat? Why do I think of Rugby Players when I hear that word other than the awful substance which glows out of my body as soon as the temperature soars over 25C? Now I don’t mind rugby players and heat, but humidity and oppressive days can go and do a runner for all I care. They are unwelcome and not wanted by most of the population. As for sweat – stop damaging the underarms of my clothes, you beast!