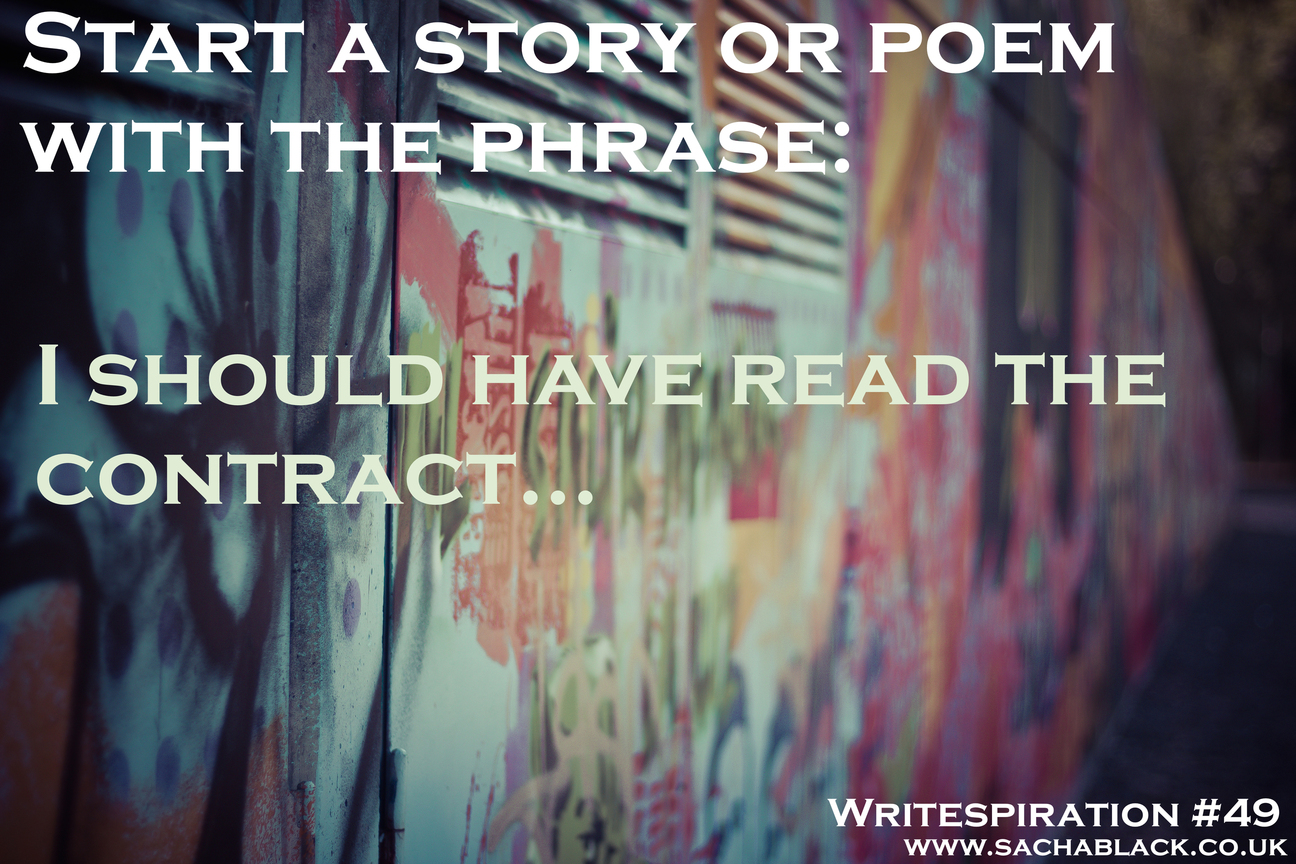 When I was at University, I spent some time in the Union – as president. During that time my major campaign was on working with Landlords. They had a terrible reputation for poor quality properties, generalising across all students, ripping off everyone, and loop holes in contracts. I created a student wide survey to establish the severity of the problem – and collect evidence to support my argument. The results were shocking, students suffering depression, hideous living conditions, and having thousands of pounds taken off them. I worked with various organisations to create a landlord accreditation scheme to beat out those landlord moguls. I am happy to say the schemes still running to this day :).

Have you ever failed to read a contract? Write a poem about the results, or a story about not having read the contract you just signed.

“I should have read the contract,” I said pawing at my clammy skin.

“If you think this is about signing a contract, James, you’re more of a fool than I thought.”

Kevin took a seat in the brown leather armchair, picked up the tumbler full of whisky and rolled it round his hand. The ice cubes rattled against the glass, each clink sounding like gun fire. Clink. Clink. Sweat trickled down my neck and soaked into my shirt collar. I shifted uncomfortably on the sofa opposite Kevin, leather creaked in the heavy air and my chest felt heavy.

Kevin snorted, “this was only ever about money and power, James. If you hadn’t signed that contract, you know damn well she would have gone for your family, or friends or whatever the hell else is important to you. Until she spilled your blood all over that contract, she’d never of stopped, and you know it.”

He leant forward in the armchair, pulled his hand through his greasy hair and rubbed his unshaven face. Wafts of stale whiskey and old aftershave lingered in the air between us.

“Since when did you become a drunk, Kevin?”

“What the fuck does it matter if I enjoy a drink every now and then, James? What does any of it matter any more?”

I stared at him swigging from the tumbler, sloshing whiskey on his grubby chinos. Something had driven him to drink. He was too ambitious just to let it all go.

“Shit, Kevin. She made you sign a contract too, didn’t she?”

He tipped his head at me, raised his glass and said, “yeah, the bitch got me too. Cheers to the end of the line, James,” and necked the rest of the whiskey.

Keith up first with a fantastic flash with dark twists and in my fave genre to boot, read it on his blog here.

If I close my eyes and clear my mind, I can re-live it as though it were only yesterday it happened to me. I suppose, in a way, it was yesterday. Ever since that first time, every day merges into a constant today; no beginning, no end; and everything that’s not of today is yesterday.

It wasn’t always like this. In the beginning; so long ago yet only yesterday; I led a normal life. I reached the grand old age of 35, an age that not many men achieved in those times, and was totally ready for the end when it came. I wasn’t ready for the means it chose, though. I expected to succumb to disease or to a wild animal of some kind; even to die in battle. I didn’t expect to go out to a flash of light from the sky.

That was the first time I died. Immediately, as far as I was concerned, I awoke in a world that was very different to the one I knew; and yet it didn’t feel unfamiliar to me. I had lived all my life, my prior life, in a cave. I had slept directly on the cave floor, covered by an animal skin to ward off the cold of the night. Somehow, though, it seemed right and fitting that I should regain consciousness on a wooden bed with a straw mattress, with a woven cover on top of me for warmth.

How many times has this happened? I honestly don’t know. Although I have a clear memory of each morning, I can’t count them. As soon as I try, they all fade away, leaving me convinced that this today is not only the first one, but also the only one. I can remember other todays only when I don’t try to, and that’s not any easy skill to master. You don’t believe me? Here’s a challenge. Pick on something, anything: an event, a book, film, person, anything at all. Got one? Now don’t think about it. Keep not thinking about it. Surprised? Of course you are. The skill lies in not trying not to think about it. You can’t not think about it because you planted it there and you keep telling yourself not to think about it. And telling yourself that is thinking about it.

Sue next with a saucy… I mean straight up first time:

I will never forget that first time. The surge of emotion, somewhere between a frisson of fear and a growing excitement… the smell of leather… the rising thrill as my touch called up such a powerful response. Since that day, I have been addicted to that sensation.
I was a bit of a late starter; something had always made me hold back. Fear, perhaps… losing control…being at the mercy of something powerful? I don’t know. I had come close to giving in once before… but it wasn’t right. I knew that… then things got scary. Dangerous, even.
It had been years before I got over that.
And then, someone came into my life and everything changed. There was a need… my own feelings took second place, my fears were dismissed, banished by the force of his belief in me and his gentle persuasion that I should simply give myself to the moment.
The world changed for me that day, opening itself in ways I had never dreamed, with a freedom I could not have expected. Why had it taken me so long? Learning to drive was the best thing I ever did…

Geoff’s a rotter with the twist at the end of this one:

My first time was at a party. Dark, too much booze and a heightened awareness fighting a lowered sense of restraint: all the ingredients needed. She came over but couldn’t make herself heard, despite her lips brushing my ear. I’d talked to her in class, but never thought she’d be interested in me. She took my hand and pulled me outside. The evening was cool, the grass damp as we lay down. ‘Don’t close your eyes,’ she said. I waited, nervy, trying not to be excited. ‘You said you’d never seen Cassiopeia before. There is it.’ It wasn’t quite what I was expecting. ‘No let’s see if we can find Orion.’