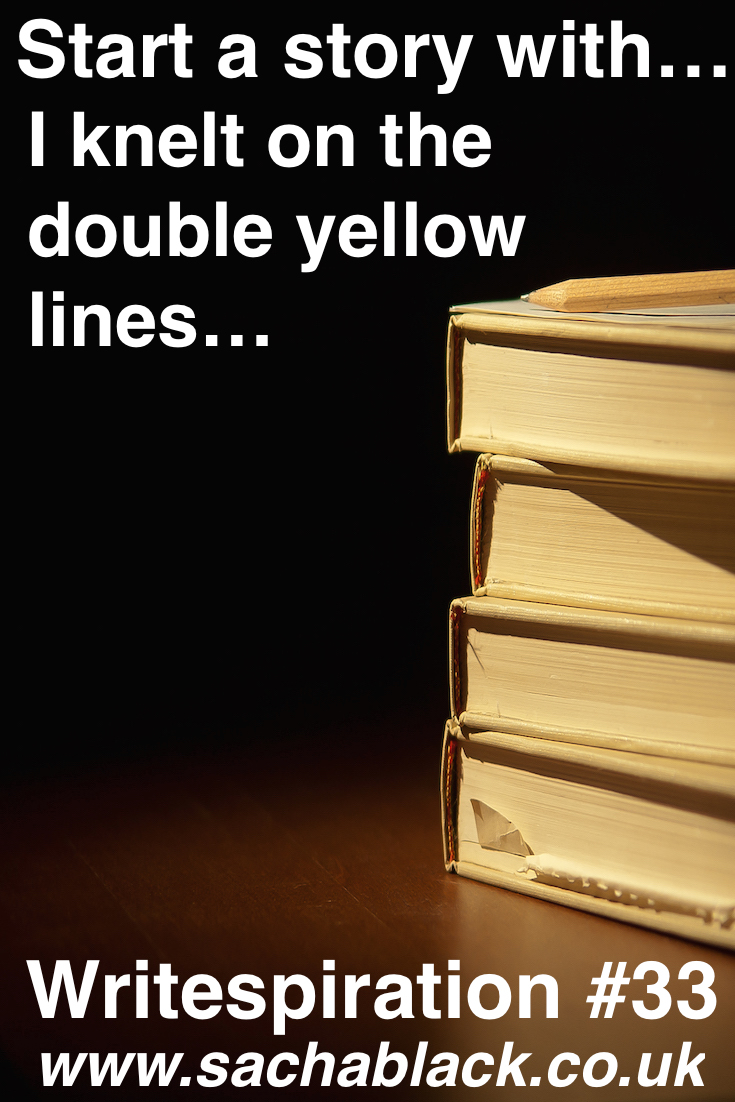 For those of you not in the UK, then a double yellow line is a marking on the side of roads to indicate you can’t park there. See picture below.

If this inspired you, jot a few words, a poem, a haiku, or a story, and I will post it with next weeks Writespiration. 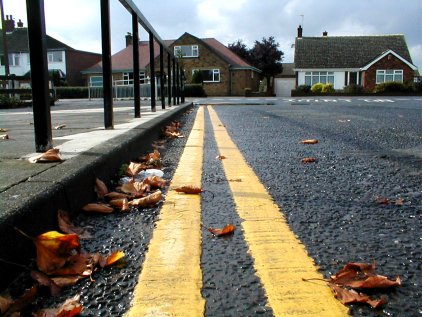 I knelt on the double yellow lines and touched her shoulder.

She had her head in her hands, a brown bag suspiciously shaped like a bottle strewn at her feet, and a seriously expensive looking suit on.

Locks of platinum blonde hair fell by her shoulders as she slipped off her hands, and her head ricocheted.

“Ok, love, lets get you home. Do you know where you live.”

She laughed, clumsily nodded, and gestured at the house behind her. I raised my eyebrow.

“Your locked out aren’t you?”

She pushed herself to an upright position. Despite her stupor her piercing blue eyes were still radiant. She was stunning.

“Yep, left the fucking keys on the inside of the door, didn’t I?! Cut my hand up trying to squeeze it through the letterbox and… the spare key is missing.”

She picked up the bottle and leant on the fence.

“So I thought I’d get pissed while I waited for the locksmith.”

Her goggly eyes peered at my jacket badge.

“Bout friggin’ time, drank a whole bottle of Prosecco waiting for you!”

The first a wonderful story telling the different sides of love from Rachel:

Diana and Angie arrived at Angie’s house well past midnight. A tall, handsome boy jumped out of the passenger seat of the Cadillac and opened the back doors for the two girls. Diane stepped out in her hot pink heels lifting her black poofy dress high enough for it not to drag in the mud. Without having to stand on her toes with her heels, she leaned in an gave the boy a kiss. Angie emerged out the other door allowing her midnight blue dress to train across the gravel. She poked her head in through the driver’s window and kissed her date.

After what felt like forever, the boys waved goodbye and drove off shrinking in the distance. Angie swayed with a look of longing on her face.

Diana giggled, “I think you missed your opportunity to throw your shoe at the car.”

“I don’t need to lose my shoe in order for Cody to come back. He’ll call in the morning.” Angie smirked at her friend turning around in the driveway. She hiked it up the porch trying to keep her dress from getting dirty and from losing her balance on her heels–after dancing the night away at prom, her feet needed a good soak.

“How do you know?” Diana questioned following her friend into the house.

Diana snorted. She was overtired, head over heels for Rob, and needed to get her dress off immediately. She didn’t want to have to listen to her friend talk nonsense.

“I’m sure you and Rob feel the same way.” Angie glared at her friend, but softened her gaze as a goofy smile took place of the frown. “I forgot I was at prom half of the night. Cody and I were someplace else–it was just the two of us.”

“Well, where was I?” Diana asked confused.

“Don’t interrupt me,” Angie whispered and continued, “I don’t know where we were, but we were far away. There were no high school teachers, high school kids, just us frolicking through a meadow, the sunshine beating down on us, free as two birds could possibly be. We could do anything we wanted, go anywhere we wanted… no one could stop us. The smell of his cologne and my perfume mingling together to make the sweetest scent you could ever imagine. You know, like in the winter when you step outside and you can just smell the snow coming? It was kind of like that. I just knew we’re meant to be together.”

“All because both of you smelled nice tonight?” Diana stifled a laugh. She opened Angie’s bedroom door and staggered over to her desk kicking her shoes off at the same time. “I need a pen and paper… this is so going in my maid of honor speech for your wedding.”

Angie placed her hands on her hips and glared at Diana. She stood in the doorway longing to sit on her bed, but she wanted to stand her ground.

“Well,” she scoffed, “what did you smell when you were with Rob?”

“I smelled his deodorant wearing off.” Diana laughed. She turned around and leaned against the desk gazing up at the ceiling. “I guess his sweat kind of drew me to him.”

“Diana, that’s gross.” Angie dismissed the conversation. She sat on her bed and started taking off her shoes and pantyhose.

“Hear me out.” Diana said seriously. “People sweat when they’re nervous, right? I felt as though Rob sweated more whenever he was with me.”

“That’s a really odd thing to notice…” Angie shook her head in disgust.

“Because time moved slower when we were together.” Diana waltzed around the room as though she and Rob were still holding onto each other. Angie looked on in confusion, but with a smile cracking in the corners of her mouth.

“You work up a sweat when you’re doing a lot. With time moving slow, or practically stopped, you shouldn’t be sweating. I could feel myself getting hot as well. I thought I was going to puke.” Diana explained further.

“You have a twisted mind.” Angie laughed.

“I’m in love. Sue me.” Diana stopped dancing and stared at Angie in the eyes.

“I just explained to you what love is and you just described the opposite.” Angie stood up from her bed. She walked over to her dresser and looked at herself in the mirror starting to take the bun out of her hair.

The second, the perfect recipe for love by Geoff Le Pard:

A Michelin starred marriage: the recipe for success

First you need a pair of eyes: they must be blue and soft, like ripe summer fruit which is full of sweet promise, juicy and illicit.
Then add two rich ruby lips, curved like sharp sliced red peppers, that form your smile, as nourishing as ambrosia.
I prepare by carefully rubbing my tentative fingers through your confident, nurturing hair, as I once caressed the adolescence grass one slow summer’s evening as you fed my addiction.
Bind the whole together with the sheen from your lustrous skin, nature’s smoothie of vanilla and maple and cookies and cream.
I know the mix is ready by inhaling the scent of your perfectly parabolic neck, unfailingly inducing an ice-cream shiver.
Somehow you miracle royal banquets from such base ingredients;
Feasts that quench my nervous yearnings and leave my love-hunger satisfied.
This meal never losses its appeal, never fails to restore my hope, however sugar low my mood.
These cunning confections, garnished with a knowing smile,
Leave me replete.
Be selfish: keep your recipes just for us.