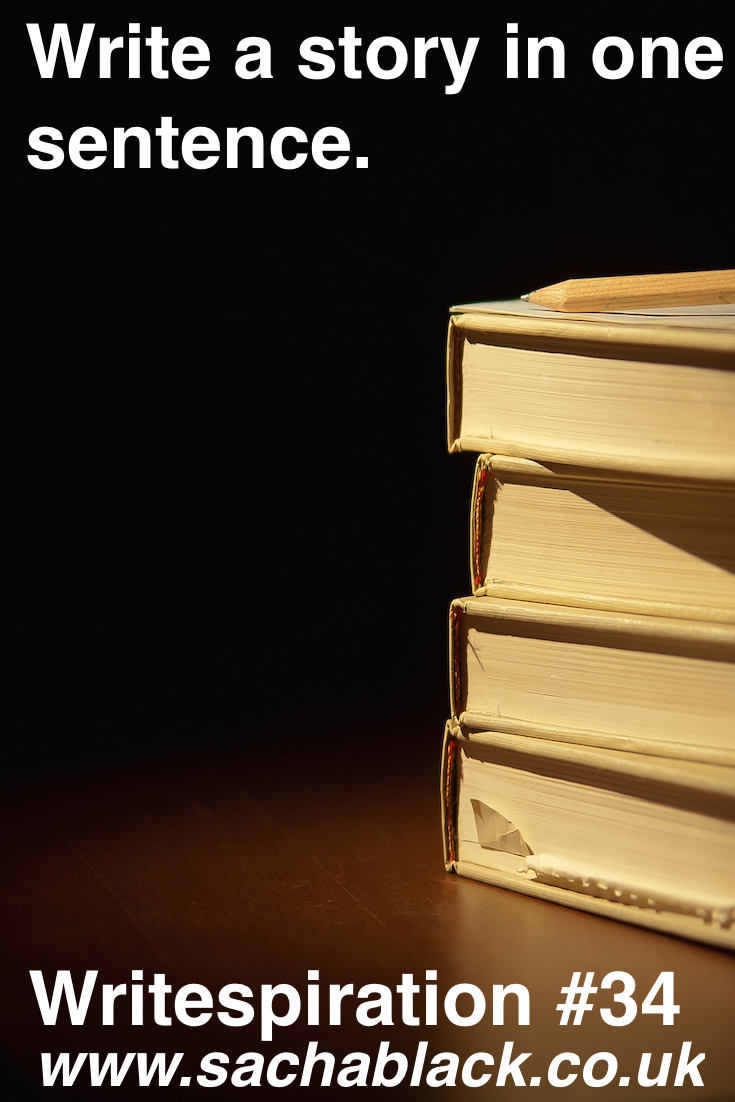 Inspired by Esther’s recent 10 and 20 word stories, and because today brings day 1 of a month of NaNo chaos, submit a one story sentence below and I will post it up with next weeks Writespiration. If your clever with grammar this could be a long sentence. I am sure there’s a book written that’s only one sentence but 100 pages. Does anyone know which book I mean?

Anyway, I’m not clever with grammar, so here’s mine:

That look, those eyes, it told me everything; we were over.

First up, Keith with his fantastically funny poem, Keith is well and truly back on form:

I knelt on the double yellow lines
Praying that there’d be no more fines
When a warden came along
I knew it would go wrong
She said, “Can’t you even see the bloody signs?”

Next up, Geoff Le Pard with his unique twist on double yellow lines

I knelt on the double yellow lines, trying to find the edge. Finally my nail slipped underneath and I prised the line away from the tarmac. Now that I had found the place where the adhesion was weakest, I teased the rest until my fingers wrapped around the yellow strip and I could give it a good strong pull. It took time but eventually I felt it coming loose. With a satisfying ripping sound, much like when a plaster is stripped from a healed wound, the yellow line rippled free of the road’s surface.
‘Good job, Harry.’ My boss beamed at me. ‘Now when you have the whole thing loose, roll it up and bring it to the workshop. We’ll dry it and then you can work on prising open the middle.’
‘Like pitta bread?’ I said excitedly.
‘Exactly. You’ll be a first rate a fire hose maker, young fella.’

I knelt on the double yellow lines…

This couldn’t be happening. The headlights picked out a mess of awkwardly tangled limbs sprawled on the tarmac as the haggard old Mini, engine still running, spewed its fumes into our lungs.

It wasn’t my fault. He had just appeared, conjured as if by magic out of the ragged curtains of fog which layered the night with patches of impenetrable milky shadow.

“Don’t move him,” warned Ciaran, crouching over him.

“We need to get him to a hospital.” The stranger’s long hair glinted copper and gold in the streetlight’s sickly glare. Beneath him, a dark pool of blood spread its fated message. He stirred, and muttered. He looked very pale.

Ciaran sat back on his heels, perplexed. “He spoke in Gaelic, but it’s a dialect I never heard before. He said they’re trying to kill him.”

“Me? I don’t know anything about first aid.”

Ciaran dug his mobile phone out of his pocket. “I’m calling an ambulance. And the police.”

The stranger’s eyes fluttered open and pinned me in their silvery blue gaze. He murmured weakly, and I could see he was becoming increasingly agitated.

“I don’t understand it… its dead as a dodo.”

As Ciaran got to his feet, the moon slid its light like a knife between the clouds, lighting up the pendant swinging at my throat, the tarnished silver Celtic knot work which had been handed down through the women of my family for generations. The stranger reached for my hands and clasped them to his broken body.

I felt myself move aside within my skin, as my physical self became the conduit between life and death. Energy flowed from earth to flesh, and beneath my hands, ripped muscle, crushed bone, torn sinews knitted together, clean and new.

“Yours is dead too…” The phone clattered to the ground, as Ciaran watched me help the stranger to his feet. His heavy cloak billowed in the wind, revealing a gleam of steel at his hip. Ciaran’s eyes goggled.

“Either I’m dreaming, or we’ve stumbled onto some weird real-life fantasy war game.”

The stranger spoke briefly in his strange guttural language, pressed his lips to my hands, then turned and strode back into the fog.

“Wait,” I called, feeling inexplicably bereft, but the air was empty, like he’d never been.

Another new participant this week, and an old friend Storm Silvermane who created this gem of a story:

There I knelt, on the double yellow lines, with disbelief in my heart, yet reality screaming in my head. How could this be so? I can remember every damn detail, yet my heart just wants to scream it isn’t so. It didn’t really happen, yet the stained curb shows it did. Flashes of the night shooting through my head torment me as my mind and heart fight without hope of reconciling.

It was a beautiful fall night, the air was brisk, yet not so cold that one had to bundle up in order to enjoy the night air. I was walking along the street listening to the music coming out from several bars I passed along the way. Some jazz here, rock there, dub step in another place and top 40 trying to be heard above it all. I wondered how people could stand living anywhere near this street with the mixture of melodies, which really did not complement one another, at least not to my ears. I was lost in thought as I passed by yet another music filled establishment and hardly noticed the woman I ran into, until I made contact with her body.

“I am so sorry!” I began to say as I held my hands back and out of the way hoping I did not present a danger to her that would induce some sort of drunken fit. When my eyes adjusted and my brain caught up a smile came to my face. “Julie.”

I watched her as she ran her hands through her hair, then over her body as though she had to fix something. Like she didn’t already look amazing.

I stuttered as I fought to keep control of my hands. They wanted to reach out for her, to wrap her in my arms and hug her tight. But, I didn’t know… I didn’t know if I could without feeling those feelings again, and I didn’t want to feel her body tense against mine in panic. I really just wanted her to stop standing there and adjusting imaginary faults of herself and say something other than my name.

“Julie. How have you been?” my voice cracked a little and I cursed under my breath.

“I have missed you.” She jumped forward finally, throwing herself in my arms as her feet left the pavement. I felt her arms grip around my neck and her lips on my cheek, kissing me over and over between words. “I have missed you so much Matthew, can you ever forgive me?”

She leaned back to look in my eyes as her feet found ground once more, but my arms didn’t let go of her, nor did hers let go of me. I blinked a few times as if digesting the words before I could fully understand them.

“You forgive me? I should be asking forgiveness of you.”

“Done, whatever, now forgive me, please?” She smiled up into my eyes, knowing it was already done.

My lips lifted from hers and I stared into her eyes, the words on my lips, the breath taken in to utter them when I heard the loud pop. So loud in my ears I could swear the car was right behind me. The idle wandering thought of some people and their lack of taking care of their car went through my brain even as I saw her eyes staring into mine.

They just stared in disbelief, utter disbelief as her body became lax in my arms. I felt the wet on my hands as I helped her to the ground, not even realizing that the reality had already hit my brain. It wasn’t a car, a car didn’t leave a bullet hole in the back of the woman you loved.

Her body shook in mine and I yelled into the night sky, trying to be heard over the music, yelling to no one, and everyone.

And no one heard, no one came.

She stared at me as though it hurt too much to blink. Barely able to raise her hand to my face, already covered in blood, while I tried to press the flow back.

Words tried to come forth, yet all that would slip out of those beautiful lips was blood.

She tried again even as her eyes were closing and I could feel her breath leaving her body. I knelt there with her on the double yellow lines and whispered. “I forgive you.”