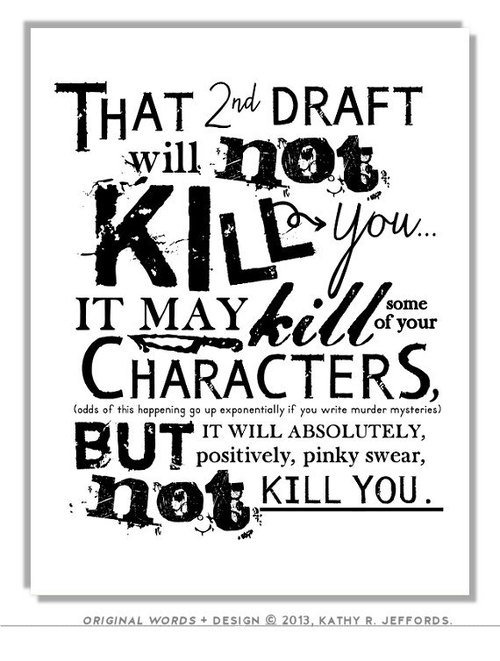 Whilst I might not be an accomplished published writer… yet and therefore not necessarily have the right to say what I am about to, I am a prolific bibliophile, which does give me the right as I may well read your work one day too! Just as a caveat, this isn’t meant as a slur on anyones work, just a lowly readers opinion.

So, killing off characters….. lots of people do it, in fact most authors kill off a character or two… Sometimes it helps to shimmy your plot along… Great, do it… but what about when you kill off a main character…?

George RR Martin does it all the time you say, well if game of thrones can do it then so can I.

I mean, you could. But word of cautionary warning… don’t just kill off main characters without a irrefutable reason. I will give you an example.

If you intend to read Divergent then skip to another post!

You spend three long books getting to know, investing in and falling in love with her main character Tris. Then she offs her a few chapters from the last book. Fatal mistake. I know I am not alone in thinking this either. Most of my friends who have read her are equally as pissed off. Heres why:

1. She spent three books making us fall in love with her character, ‘feel’ for her character, get to know her inside out, as well as we know ourselves.

2. We were invested in her

3. It came out of the blue – I had to re-read the page in which she killed her off three times before I understood that she had in fact killed her off, at which point I genuinely said out loud “Are you fucking kidding me?”

4. Three books close to a thousand pages of reading about a character and then the last couple of chapters end without her in it.

5. Secretly most people want a happy ending for the characters they love, unless the whole book has lead you to a different ending, which this didn’t.

6. She wrote the first two books from the main characters point of view, in the first person, and then split the last book chapter by chapter to two different characters POV – annoying. Do it the whole way through or not at all.

7. She tricked us, into thinking she was going to have a happy ending with ‘four’ her boyfriend and live happily ever after.

This all adds up to being NOT ok. It’s sloppy writing, in fact it is down right lazy writing. I feel like she couldn’t be bothered to work out an ending so she just offed her main character. Who does that???

She made me invest in a character and then tricked her readers (me) out of the ending we had been expecting and wanting. It’s not ok to do that. Whilst Veronica Roth wrote an outstanding first book, which has clearly made her millions, and an ok second book, she utterly massacred the last one, with an ending thats pissed off every reader I know. It has certainly put me off reading any of her future work. What it does show, is that she can certainly make her audience talk about her work, and feel emotional about her work, I mean, if angry counts? Don’t get me wrong, this isn’t meant as a character assassination on Veronica Roth or the Divergent series. I am just trying to show you how not to really irritate your readers.

DON’T CHEAT US OUT OF AN ENDING YOU LED US TO.

Obviously, if you have led us down the road of knowing the main character is going to die, then fine. But if you haven’t, then please be careful, think about what your readers would want and expect, and hope for, for your characters ending.

The one thing I do have to thank her for, is she inspired me to get off my arse, and write a better story, with a better ending. I’m not saying I am a better writer than her, I’m clearly an unpublished nobody. But, she made me want to write a story with a better ending. I was that annoyed! and here I am in the midst of NaNoWriMo, several thousand words deep in my book…. 🙂